Light the torches and sharpen the pitchforks, I enjoyed “The Da Vinci Code.” While long-winded, Ron Howard’s version of the Dan Brown best-seller provided a lovingly smothering mood of daredevil exposition and for-fans-only historical minutiae. Even if I didn’t seize the scholarly passion burning behind the dialogue or comprehend the larger religious misconduct of the plot, I enjoyed the cinematic bluster of the work and appreciated how Howard took the time to preserve the experience for the fanatics. Plus, a heaping dose of star power from the stately Tom Hanks never hurts, unless Nora Ephron is directing. “Angels & Demons” rolls up to bat three years after “Code” stormed the box office, and while Howard’s promise of a snappier pace is kept, it’s hard to sense much of a seismic difference between the two films. But that’s fine by me.

When the Large Hadron Collider, assisted by the nervous Vittoria Vetra (Aylet Zurer, “Munich”), breaks down a minute amount of antimatter into three canisters for scientific testing, one of the containers is quickly stolen by a rogue group called the Illuminati. A secret society bent on disrupting the Vatican’s postmortem search for a new pope, Illuminati agents plant the canister in a hidden passage of Vatican City, kidnapping four cardinals and threatening to destroy those gathered to mourn. To help investigate the crime, Robert Langdon (Tom Hanks) is reluctantly brought in by church officials who hope his decoding skills will lead the proper authorities (including Stellan Skarsgard) to the bomb. Set loose in the labyrinthine city, Robert finds assistance from Camerlengo Patrick McKenna (Ewan McGregor), a kindly papal assistant eager to stamp out the Illuminati threat. Armed only with his wits, Robert plunges into the hunt for the cardinals and the antimatter, stumbling upon larger revelations that challenge the worlds of religion and science.

A fun fact about “Angels & Demons” is that the material was actually published before “Da Vinci Code,” making this Vatican vacation Langdon’s debut adventure. Well, leave it to Hollywood to rework the facts, and now “Demons” is a sequel, with Langdon suffering the damning glare of a wounded Catholic Church, forced to engage the professor’s abyssal knowledge base to combat long forgotten enemies. It’s the first of many changes to Brown’s work, with the primary goal of “Demons” to keep matters trucking along at all costs.

Perhaps spooked by the outspoken critics of “Da Vinci Code,” Howard has opened up the throttle some with “Demons,” questing to balance Brown’s dizzying barrage of clues and symbols with a traditional, snappy thriller perspective. Obviously this is a workmanlike effort from Howard, who appears intent on keeping fans satisfied with his pedantic take on Langdon’s escapades, dialing down expected hysteria to maintain a sane rhythm, which could read as inertia to the less invested. Howard passes on a hyper approach to imagine “Demons” as durable continuation of “Code,” wading further into the warm waters of split-second decoding, random fact spewing, and the occasional burst of violence.

The difference between “Demons” and the big screen version of “Code” is spied early on, and I don’t mean the loss of Langdon’s ludicrously overanalyzed mullet. Howard engages a suspense mode right off the bat with the film, and the story delivers with kidnappings, sizzling elemental branding irons, poisonings, Illuminati gunplay, and a Billy-style “Family Circus” map run all over Vatican City as Robert and Vittoria sniff out clues amongst the religious and artistic paraphernalia. With the ticking clock being the fading battery on the antimatter bomb (hey, at least there’s something to ratchet up the tension), “Demons” is pleasantly spry, even with literal shovelfuls of exposition thrown recklessly into the engine of the feature to power its increasing absurdity. But a sense of reality has never been a concern for Howard. He’s making an adult-minded moviegoing event, and a fulfilling one at that.

It’s science vs. religion battling it out for control of the universe in “Demons,” and Howard handles the war superbly, keeping the hot-potato debate to a dull roar, with considerate pleas for attention emerging from both sides. The commentary is a genuinely compelling component of the narrative, and the screenplay imparts a commendable perspective for both minds, making Langdon a reticent warrior for truth and study, not a colossally educated hitman with his sights trained on the Catholic Church. I wouldn’t brand “Demons” an exhaustive mental exercise, but the debate between science and religion urges the material away from slipping into a dull routine of peril and tongue-twisting monologues.

Again, “Demons” is not far in tone from “Da Vinci Code,” and visually the two pictures are siblings, both backed triumphantly by composer Hans Zimmer, who recycles his transcendent, what-moviegoing-is-all-about “Chevaliers De Sangreal” closing track from “Code” cleverly throughout the new film. “Demons” also offers a heightened sense of danger, full Vatican immersion, and another confident Tom Hanks performance for returning guests. A lengthy running time of 135 minutes is a bit of a hurdle, especially in the anything goes final reel that lurches too hungrily for awkward coincidences to sort itself out, but “Angels & Demons” satisfies with familiar dance steps, enhanced by a needed shot of sequelized hindsight. 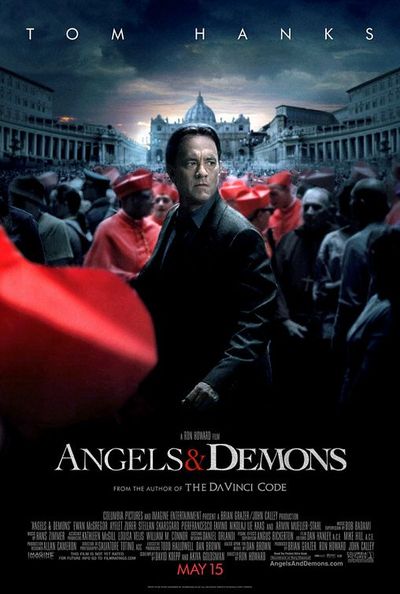