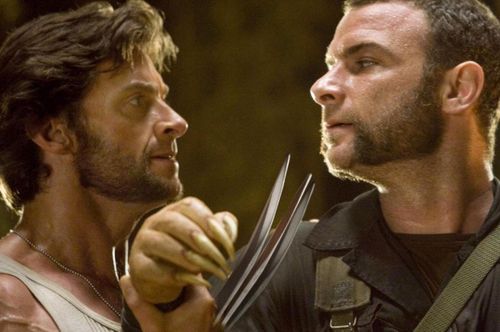 The bottom line on “X-Men Origins: Wolverine” is this: if you found any morsel of entertainment value out of 2006’s “X-Men: The Last Stand,” then “Wolverine” will be painless to digest. If you found “Last Stand” to be a drooling cinematic rape of a near-brilliant franchise, “Wolverine” is going to feel like further salt in the wound. While I recognize the multiple fandom violations of “Last Stand,” I found it to be a lively thrill ride with an abundance of mutant vs. mutant action to sufficiently numb the brain. “Wolverine” is less triumphant as multiplex junk food, but still retains a satisfying lunacy and even more mutant monkey business to relish.

Born in the 19th century, Logan/Wolverine (Hugh Jackman) has forged a life of aggression with brother Victor/Sabretooth (Liev Schreiber), taking the mutant siblings on a ride of world wars and bloody heroism, only in Victor’s case, the courage has gradually twisted to villainy. When fiendish William Stryker (Danny Huston) comes calling to form a special covert team of mutants (including wil.i.am, Dominic Monaghan, and Ryan Reynolds as the sword-happy Deadpool), the brothers sign up, but Logan soon develops a distaste for governmental terrorism. Retiring to Canada with love Kayla Silverfox (Lynn Collins), Logan is pulled back into Stryker’s deceptions when it’s revealed that Victor has gone rogue, murdering his old mutant conspirators, with his brother next on the list. Agreeing to Stryker’s demand for an excruciating adamantium makeover, Logan turns his body and bone-claws into metal, hoping his new defense will put an end to Victor’s reign of terror.

The cruel “Last Stand” comparison is an apt one to make, since the “X-Men” franchise slowly dissolved into a primitive cartoon once director Bryan Singer walked away after his virtuoso work on the first two features. Without his nuanced touch, these movies have been stripped of their regality and turned into action fodder for pre-teen boys to emulate in the backyard, and simpleton entertainment for message-board mooks to ironically mock. “Wolverine” squeezes the franchise for the basic routines of mutant combat and operatic slashes of betrayal, leaving behind any opportunity to return the series to the intelligent comic book escapism it started out as. Those days are long gone, and now all the franchise wants to do is make noise.

While crippled by severe filmmaking blunders, “Wolverine” remains a sweet piece of hard candy, nourished by an incredibly fluid summer movie pace and an edict that demands an explosion every 15 minutes. Unlikely director Gavin Hood (the sensitive “Tsotsi”) is wise to keep the train moving at all costs, trusting sheer velocity might help to counteract the film’s enormously inane screenplay. Credited to writers David Benioff and Skip Woods, “Wolverine” is a disaster whenever the characters pipe up, inviting monosyllabic exchanges and verbose, on-the-nose exposition that’s completely unnecessary. A visual feast, the film is best communicating through sweaty body language and bountiful special effects, but Hood insists on a running commentary, and it grows progressively more infuriating as the film unspools. The dialogue is either teeming with clichés or insultingly idiotic, at times feeling like the actors are merely reading a transcription of the film’s international release subtitles.

Listen, with Jackman oiled up and growly, Schreiber licking his fangs and jagged fingernails, and a host of other mutants scurrying around for screentime (the list includes Blob, Agent Zero, Emma Frost, Cyclops, Bolt, Kestral, the almighty Gambit, Kegel, Fingersnaps, and Peppers – the last three I just made up), do we really need an endless stream of one-liners and overly descriptive monologues to pad the film? “Wolverine” is a wonderfully bright and beautiful picture to watch. The garrulous dialogue just smothers any potential fun. It adds up to clumsy storytelling that kicks the legs out from under the feature.

“Wolverine” is a cluttered film, but it stays moderately focused, primarily due to the raw, knowing performance from Hugh Jackman. This is arguably his greatest screen role, and Jackman appreciates what audiences are dying to see from Wolvie, which includes the adamantium blades, partial nudity, bushy mutton chop sideburns, and a facial gallery of grimaces and grunts. The actor delivers big on the grit of the character, adding a new dimension of breathless betrayal as Wolverine is hit below the belt from all sides in this new adventure. It’s a joy to watch Jackman bring the role to life again, and while this is his fourth time with the “X-Men” franchise, the actor seems more energized than ever to wrestle with stuntmen and fly through the air, slicing everything in his path. His gusto is contagious, constantly lending “Wolverine” thunderous highlights it doesn’t always earn on its own.

What exactly are Stryker and Victor up to? Well, it all comes down to a mutant brawl on the lip of a nuclear reactor, which perfectly sums up the bigness Hood is searching for and occasionally achieves. Staying true to the title, “X-Men Origins: Wolverine” gives the audience a solid backstory to the character’s mutation, his code name, and his lifelong pledge of solitude. There’s plenty of action to gorge on too, along with a few surprises for die-hard fans. It’s all so plastic and forgettable, but for the 100 claw-popping minutes immersed deep in Wolverine country, the film remains palatable. Heck, if the actors didn’t bother to speak at all, I’m convinced there’s a masterpiece to be found in here somewhere. i almost laughed out loud when the helicopter blew up, then blew up again, then one more time...