Love him or hate him, Mike Tyson is a frighteningly magnetic figure of intense debate. He’s been a hero and a scoundrel, a champion and a convicted felon, yet he’s managed to stay in the public eye as one of our more iconic sporting figures since he was a disillusioned teenager taking the boxing world by storm. I wouldn’t consider “Tyson” to be a carefully drawn documentary as much as it is a lung-heavy conversation with the superman as he nervously sums up his highs and lows, with director James Toback hoping to provide a lucid explanation of the lifelong inhospitable behavior and unhealthy motivation somewhere along the way.

“Tyson” presents Mike Tyson as he stands today: an unsettled man searching for purpose beyond the shackles of his fame. Patchily photographed and edited to simulate the fragmentation of Tyson’s mind, the film allows the former heavyweight champion a forum to air his grievances and own up to his limitations. It’s a scattergun approach from Toback, but with Tyson itemizing his behavior over the years, the film is gift-wrapped catnip to fans of the boxer and those who enjoy watching the deconstruction of a life gone horribly awry. Toback does his best to keep the salacious and truly horrific tidbits to a minimum, but with Tyson, a little goes an awfully long way.

“Tyson” is broken down to four major events: his youth under the intense tutelage of beloved trainer Cus D’Amato; his ascension to boxing royalty, mowing down opponents with his stunning skill and animal fixation on victory; the 1991 altercation with Desiree Washington (Tyson refers to her as a “wretched swine of a woman”), which lead to a rape conviction and three year prison sentence; and the eventual downward spiral from boxing and the spotlight, hastened by the legendary 1997 ear-biting Evander Holyfield match. Toback raises the questions of Robin Givens, Don King (a “wretched, slimy, reptilian” promoter who allegedly stole most of the fighter’s fortune), and Tyson’s voracious appetite for women as well, leaving the feature more encompassing than expected, especially with Tyson himself credited as one of the producers. Toback might not be here to nail the champ to the cross, but he’s not skipping critical dirty laundry that should rightfully be aired.

The feature is sympathetic to Tyson, but not always forgiving. Holding tight on the boxer as he rifles through the events of his life, it’s a comfort to watch the verbose athlete own up to the damage he’s inflicted and shocking to see him casually dodge larger errors in judgment, blaming a difficult childhood, drugs, and cruel managerial manipulation for his brutal ways. Tyson isn’t here to apologize, but his odd indifference to instances of infidelity and casual beatings come across as particularly strange. Hey, if I were Toback, I wouldn’t exactly be poking this guy with a stick either, but the ultimate purpose of “Tyson” is a budding mystery that’s never quite solved.

Apparently semi-clear of his once formidable manic depressive haze, Mike Tyson is now a filled-out 42, facially tattooed, and finished with boxing after a marvelous career of iron-fisted dominance the sport will perhaps never see again. “Tyson” monitors a man struggling with his bruised memories, regretful but also slightly unrepentant, taking daily comfort in his six children and a fascination with pigeons. “Tyson” isn’t a warts and all dissection of a living legend, but with Mike Tyson and his glaring, guarded nature, a partly open doorway to the soul is all one can reasonably expect, resulting in a pleasantly informative feature film, but one that’s never truly, dynamically revelatory. 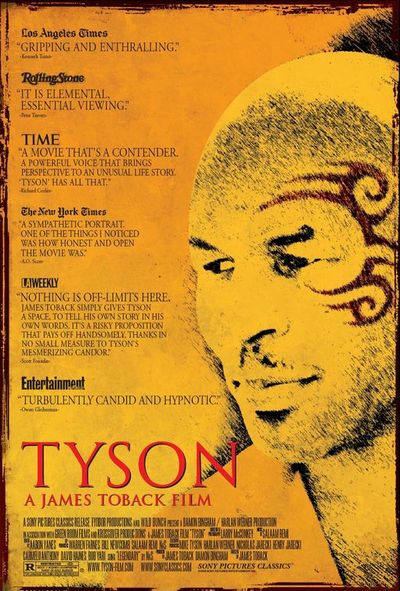