Author Bret Easton Ellis made a name for himself broadcasting the lurid ‘80’s hobbies of the rich, affected, and occasionally homicidal in books such as “Less Than Zero” and “American Psycho.” “The Informers” was Ellis’s 1994 wandering ode to the hollow core of the decade, favoring extensive depictions of soulless characters trying to maintain a sense of perspective while juggling immorality, often mistaken for true purpose. It should come as little surprise to read that the feature film adaptation of “Informers” doesn’t quite know how to sneak up on such unrelenting misery and dry satiric stabs.

In Los Angeles during the mid-1980s, a percentage of the populace is trying to sort out their miserable lives. Movie studio executive William (Billy Bob Thornton) is hoping to reconnect with his estranged wife Laura (Kim Basinger), but can’t keep former mistress Cheryl (Winona Ryder) out of his head. William’s son Graham (Jon Foster) is looking to manage his hedonistic lifestyle when jealousies with girlfriend Christie (Amber Heard) arise. Rock star Bryan Metro (Mel Raido) is trapped in a depressive, self-destructive haze. Young Tim (Lou Taylor Pucci) has agreed to vacation with his alienated father Les (Chris Isaak), only to find the parental figure a loudmouth alcoholic. And hotel employee Jack (the late Brad Renfro) is caught in serious danger when an old acquaintance (Mickey Rourke) reemerges with a kidnapped child and little in the way of answers.

These are intentionally vapid, diseased characters to follow in “Informers,” so any complaint of a shriveled emotional core to the material seems silly to even bring up. Director Gregor Jordan (“Buffalo Soldiers”) has set out to make an evocative piece observing the pathology of the story’s residents, bathing the picture in lustful, hazy lighting and taking great care to represent crucial LA. hotspots. Jordan maintains a powerful visual control over the picture, extracting proper amounts of sleaze and compositional tension to underscore the debauchery, eagerly following visual cues of the era to create a stylishly decadent world for the actors to play around in. At its best, “Informers” takes the audience to the 1980s with mesmerizing clarity and sublime fits of venom; however, I remain unconvinced this material even needed a film adaptation to begin with.

Episodic by nature, “Informers” refuses the viewer anything in the way of an entry point to the psychological needs of the screenplay. The characters have problems, they attempt to sort them out, and many fail while nursing brand new problems. It’s a cyclical mode of dramatic transportation that confuses Jordan, who would rather tinker with a fog machine than be confronted with adequate characterization. “Informers” often stalls trying to capture Ellis’s blindfolded plotting and coke-dusted ennui. The translation never really has a chance to bloom on the big screen, with too many actors competing for minimal screen time. The jumping back and forth between subplots never snowballs the way Jordan is hoping, leaving much of the film a highlight reel of tedious self-centered exasperation and ample topless shots of Heard.

For every devilishly clever “American Psycho,” there’s a putrid “Rules of Attraction,” leaving Ellis a tough adaptation nut to crack. Still, Hollywood continues to try, looking for ways to combine the glamorous world of drug abuse and emotional vacancy with the necessary dramatic antidotes to clear the conscience. “The Informers” is a beautiful picture of misery, but the surface quality is never penetrated to satisfaction. In the end, it’s a mess of smeary mascara, mix tapes, and hair mousse in search of connective tissue. 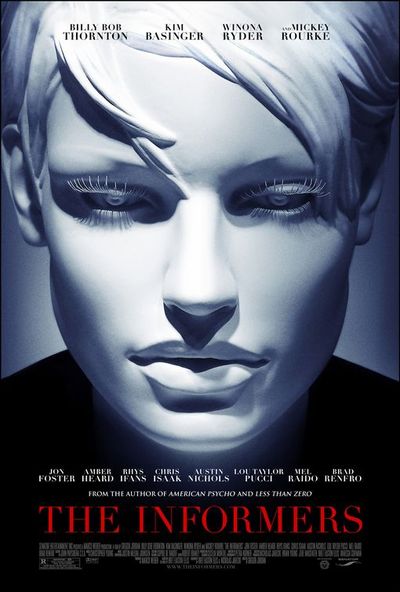