Watching acting legends Rip Torn, Bruce Dern, and David Carradine horde a motion picture all to themselves is the only feasible reason there is for sitting through the sluggish romantic comedy, “The Golden Boys.” A cantankerous caper that shows as much reverence for the cast as it does the chilly, sea-licked Cape Cod setting, “Golden Boys” holds a lot of affability in its heart, trapped inside a deathly dull motion picture.

The year is 1905, and elderly captains Zeb (David Carradine), Jerry (Rip Torn), and Perez (Bruce Dern) are fed up with their bachelor ways, looking to rope in a wife to help clean up the house and make proper meals. Placing an ad for a woman in the paper, Jerry is selected by coin toss as the lucky man to marry whatever comes their way. Enter Martha (Mariel Hemingway), a bright, attentive widower hoping for a fresh start in this fishing community. Fond of her comfort, Zeb and Perez start to rethink the nuptial plan, attempting to keep Jerry at bay while they maneuver their own schemes of romance to capture Martha for themselves.

Shot on location in Cape Cod, “Golden Boys” is director Daniel Adams’s valentine to the golden age of seafaring equipment and escapades, marshalling a dry comedy that takes more interest in antique clothes and fisherman traditions than it does pace or timing. It’s obvious Adams wanted to make a period piece first and foremost, as major attention is lavished on the historic northeastern ornamentation of the film. Even working with a low budget, the director nudges commendable production value out of a very small area, crafting an eye-catching backdrop to the sleepy shenanigans. When all else fails the film, and it all eventually does, the location offers a prime distraction to bored audience members who might find the central plot lacking in dramatic juice.

While esteemed performers with a list of Hollywood accomplishments a mile long, Carradine, Dern, and Torn aren’t exactly fired up by the material here, slowing down “Golden Boys” with their creaky vocal cadence. The acting comes across as tired or slightly perturbed in a way that doesn’t reflect a premeditated acting choice, with...every...line...delivered...like...this. Torn at least has the sense to mysteriously bolt for a majority of the film, leaving the lion’s share of the story in Carradine’s hands. While appropriately ocean crusted, pipe-chewing, and squinty, Carradine’s pauses are eternal -- an antithesis to Hemingway’s welcome pluck as the film’s object of unrepentant and profoundly unfunny sexism.

Tortoise paced and devoid of any tension, “The Golden Boys” is earmarked for less sensitive audience members who only crave the basics from their multiplex meals. It’s safe, digestible entertainment, but also punishingly overlong and absent even one single surprise. All the admirable shipyard textures and thespian marquee value can’t fog the fact that while peaceful, “The Golden Boys” is about as thrilling as an Abe Simpson bedtime story. 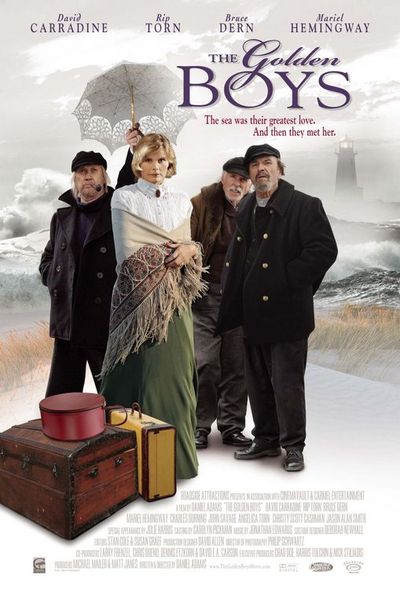