Arriving with the upcoming baseball season is the drama “Sugar,” a modest minor league recruitment story that profits from an exceptional perspective on the customs of the game both on and off the field. True poignancy isn’t in large supply, but when the action visits the small town stadiums and long bus rides of the sport, “Sugar” grows into a something evocative and educational, along the lines of “Bull Durham,” only with absolutely zero sex appeal.

Trying to make ends meet in the Dominican Republic, Miguel “Sugar” Santos (Algenis Perez Soto) has always trusted the gift of his pitching arm, which has brought him fame in his hometown. Recruited to the minor leagues in America, Sugar cautiously accepts the challenge, reluctantly leaving behind his entire family. Taking off to the mysterious lands of Arizona and Iowa, Sugar befriends a few teammates, endures a stunning amount of culture shock, and learns that American ball is serious business, leaving every pitch a critical step in his career. It doesn’t take long for Sugar to feel overwhelmed, placing the young ballplayer at a crossroads between his major league dreams and the comforts of his humble domestic pursuits.

At its core, “Sugar” is a satisfactory motion picture that deals with baseball matters realistically, stripping away glamour to spotlight the raw talent and internal drive it takes to make it to the big leagues. I fell deeply in love with the way directors Anna Boden and Ryan Fleck (“Half Nelson”) bring the viewer into the stark reality of the minors, constructing captivating cinema out of Sugar’s awkward immigrant status, where his inability to speak English alienates him from most of the managerial staff, keeping him in state of fear with the outside world, and comically only permitting him a steady run of French toast meals (the breakfast treat being the only menu item he can safely pronounce).

Played with reserve by Soto, Sugar is a fascinating character the film finesses agreeably for cultural discomfort and naiveté, and there’s tremendous filmmaking conviction nudging the performance along in the early going of the feature, when the character first gets a bitter taste of failure. Struggling to find his proper place on various teams, Fleck and Boden capture the upsetting impact of minor league ball on Sugar, where careers are made and broken on a daily basis. Finding ideal location nuances and crisp ballpark majesty, “Sugar” is at its finest when baseball is up front and center and the screenplay allows plenty of time for Sugar to stew in his pitching mound trials.

Once melodrama kicks in, “Sugar” goes blind, stumbling around looking for a way to artificially elongate the character’s limited situation in a way that returns him to his roots. The answer is New York City, an Emerald City of sorts for illegal aliens everywhere. Once Sugar goes AWOL from baseball and heads to the Big Apple to clear his mind, “Sugar” drops a satisfying consistency and chases an ill-fitting immigration woe tangent that feels stapled on at the last minute. While the dimension the subplot provides is tolerable, the execution is unsound, indirectly amplifying thin passes at Midwestern stereotypes during the film’s midsection that were previously thought to be momentarily harmless. It seems Fleck and Boden didn’t have much of a game plan for the main character off the mound after all, and this wearying aimlessness waters down the tension of Sugar’s rapidly imploding life, grinding the film to a disappointing halt. 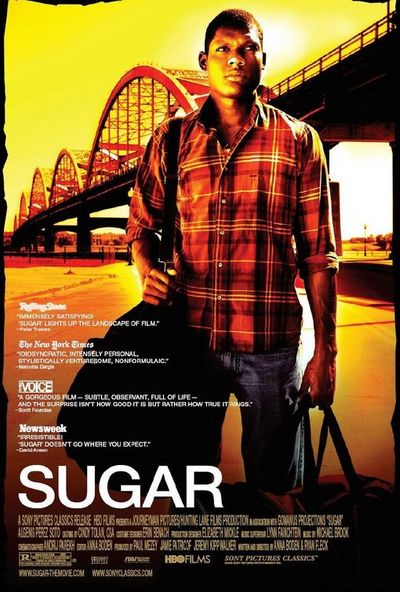