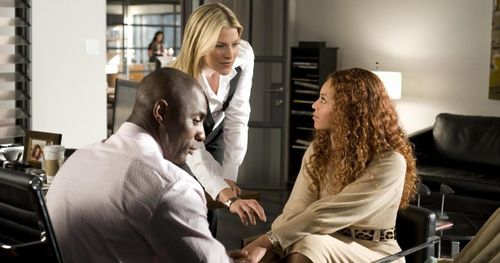 After two failed shots to nab Oscar gold with “Dreamgirls” and last year’s underwhelming “Cadillac Records,” Beyonce Knowles is ready to get her hands dirty. Summoning the spirits of the dearly departed blaxploitation genre, Knowles has selected “Obsessed” as her initial step to becoming more than just a rabid prestige hunter and ideal object of stunt casting agents. This is the lauded singer’s first starring vehicle, and she’s chosen wisely. What better way to show some imposing box office muscle than to headline a trashy, empty calorie thriller that plays with racial bugaboos and DTV slasher conventions for a cheap, conversation-with-the-screen response. Oh my, this picture is junk food, but worse, it’s an absolute toothless bore.

A talented corporate drone, Derek (Idris Elba, “The Wire”) is on the verge of great professional success, while also tending to his domestic duties with loving wife Sharon (Beyonce Knowles) and their infant son. When Derek is introduced to sultry office temp Lisa (Ali Larter, “Heroes”), a series of harmless flirtations transforms into a serious situation of potential infidelity, leaving poor Derek in a panic. When Lisa’s playful sexuality turns into an alarming bout of stalking, Derek is forced to explain his temptations to a suspicious Sharon, who, as any territorial wife would, rises to the occasion, defending her husband’s honor to the bitter end.

One of the many problems that plague “Obsessed” is the character of Lisa. Modeled after Glenn Close’s bravura turn in “Fatal Attraction,” Lisa, as interpreted poorly by the limited Larter, is a stormy ocean of psychological disease, only she never makes a salient point. With a film titled “Obsessed,” one would think a little naughty fire in the nether regions is enough to build a central battery of suspense, but director Steve Shill and writer David Loughery fail to offer the character a tangible point of view. Lisa is a stock villain character, parading around in high heels, providing zero motivation; she’s a cherry-lipped boogeyman meant to titillate and revolt, but the proper response to the role is laughter. Larter wildly overplays the sex kitten nonsense to a point of uncomfortable camp. And if the central figure of menace is a joke, imagine how unrelentingly goofy the rest of “Obsessed” gets.

As much as I like Elba as an actor (he can be phenomenal), “Obsessed” is way below his skill level. It’s a hackneyed, tacky suspense film struggling to tighten a noose around the neck of the audience that was never properly fashioned in the first place. Elba displays his best faces of terror, but when Lisa’s unholy stalking alchemy consists of spam e-mails and fraudulent flower deliveries, there’s really no reason for the actor to even stay awake. Shill doesn’t have a clue what he’s doing, clutching the wooby of cliché like a filmmaking infant. “Obsessed” is allowed some room for silliness, but only if the material maintains a proper edge. The discomfort never arrives, mostly due to the PG-13 rating that keeps Lisa’s panties on her body instead of where they truly belong: in Derek’s mouth. And I mean that metaphorically. A dastardly sneak attack concerning a drugged beverage is also neutered by the rating, turning an unsettling hotel room violation into a vague game of “did they/didn’t they” the film never answers. If you’re a sexually charged thriller and you can’t even play the rape card, then what good are you?

Regardless of the ineffective tension build, most of the target demo is here to watch Beyonce beat up a skinny, blonde white girl, and Shill is more than happy to dish the violence up for the finale (the film’s alleged working title was “Oh No She Didn’t”). Knowles is an unforgivably terrible actress, but once she assumes her domestic lioness stance to go all Pam Grier on Larter, “Obsessed” rockets to another planet, devolving into an absurd action film with both actresses eager to follow atrocious fight choreography, punctuated by composer James Dooley’s repetitive two-cent Casio stings, leaving me wondering when the Leprechaun was going to pop up and devour Lisa and Sharon. He never arrives, but a cameo by a horror icon is a more artistically sound idea than anything the conclusion of “Obsessed” comes up with.

Co-produced by the Knowles Empire and Magic Johnson, “Obsessed” is minor league ball compared to the other wonderfully lurid highlights of the subgenre. It’s a film to laugh at instead of with, and that’s a missed opportunity Magic Johnson should be ashamed of. I don’t know why I’m singling out Magic Johnson, but logical motives aren’t a priority for this loathsome movie, so it won’t be a priority for me. 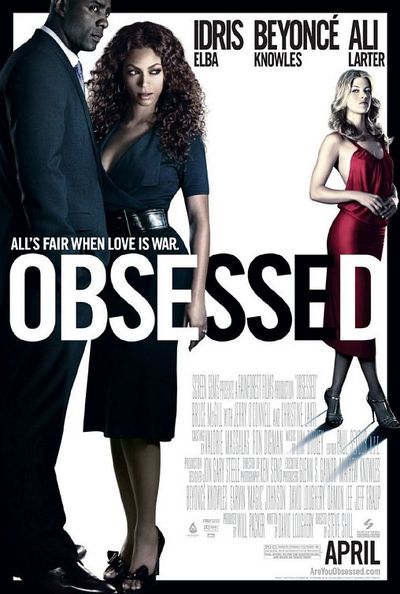 No suspense. Nobody can act (you were too kind to Elba). And Ali Larter has the body of a 12 year old boy. Zero sex appeal.

I can't believe I paid to see this movie today.

I think you are incorrect on everything except it should have been R so they could have had naked Larter, and the rape card. I get why they didn't, though.

Does that movie poster kind of make it seem like they wrote "obese" over Beyonce's body? Umm...