“Mutant Chronicles” is best described as an ultraviolent sci-fi actioner crossed with steampunk sensibilities and flecked with religious overtones. Confused? Well, so is director Simon Hunter, who gives the visual scheme of the picture everything he’s got, crafting a handsome gorefest only to be undermined by budget constraints and a laughably crude screenplay the actors seemed embarrassed to recite. “Chronicles” is ambitious, and that counts for something, but bites off more than it can chew, leaving the finished product loaded with arresting sequences in search of more mature writing.

Hundreds of years into the future, the world is controlled by a handful of corporations. As they wage war on each other, a great seal is destroyed, opening up a vast hole in the Earth containing an alien machine capable of turning the living into vicious, body piercing mutants. Quickly taking over the planet, the mutants force the population to flee off-world, pushing Brother Samuel (Ron Perlman) to turn to an ancient book for answers on how to stop the infernal machine. Assembling a squad of soldiers armed to the teeth, including Major Mitch Hunter (Thomas Jane), Samuel leads the team into the bowels of the planet to stop the machine once and for all. Their only obstacle is the legion of mutants ready to tear them apart.

“Mutant Chronicles” contains a horde of cinematic inspirations to fuel its mayhem, but to cut to the chase, I would say tonally it’s “Saving Private Ryan,” visually it’s “Sky Captain and the World of Tomorrow.” “Chronicles” is a war movie with heavy sci-fi decoration, yet Hunter stays close to the conventions and bravado of WWII combat films, using the Major Mitch character as the John Wayne figure of bravery and honor in the midst of madness. Bullets whiz by, body parts are blown to bits, and grizzled men make grizzled conversation while swilling hooch. For the opening 20 minutes, Hunter creates a coarse, but stylish homage to grunt cinema, commencing “Chronicles” on a deafening, but thoroughly entertaining note of battlefield chaos.

Once the questing plot of “Chronicles” emerges, so does Hunter’s inexperience with actors and dialogue, resulting in rancid exchanges between the mercenaries that typically sandwich hokey one-liners between expletives. Writer Philip Eisner (“Firestarter 2”) isn’t exactly helped by trivial actors such as Devon Aoki and Luis Echegaray, but that doesn’t forgive the monosyllabic dialogue on display here. Hunter is aiming epic with “Chronicles,” but the language is coarse and witless, deflating the experience every time somebody decides to open their mouth.

Thankfully, the visual elements of “Chronicles” offer more of a satisfying distraction. Created on digital sets, the picture is highly stylized, with every color drained from the photography except for red, leaving a graphic novel appearance that amplifies the violence. Of course, a few shots look like outtakes from a high school student film that had too much access to lousy chroma key settings, but the majority of “Chronicles” is beautifully lunar in appearance and inventively enhanced. With Hunter keeping his attention on massive amounts of bloodshed, the images strike a nice balance between the realistic crunch of war and the cartoon nature of the premise. Just expect a few wince-inducing moments.

“Mutant Chronicles” is the type of furious genre picture to root for, but always ultimately disappoints. Hunter loses his grasp on the reigns in the final act, gumming up an efficient actioner with overcooked theatrics just to give the audience an unnecessarily seismic conclusion. The feature is better executed in a shoot-first-ask-questions-later style that encourages silence and brutality. Once the material is asked to explain itself, the entertainment value of the film curdles immediately. 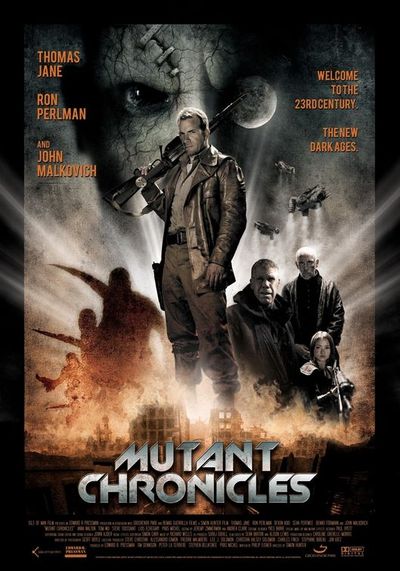