Film Review - Is Anybody There?

With two direct and developed lead performances from Michael Caine and young Bill Milner, it seems unfair to watch their efforts wasted on an uneven, unsatisfying picture like the tear-jerker “Is Anybody There?” It’s a simple case of acting trumping splintered storytelling, with most, if not all scraps of character vulnerability and empathy emerging from the measured talents of the actors, not the interminable, shapeless motion picture.

To help make ends meet, 10-year-old Edward (Bill Milner, “Son of Rambow”) has watched his parents (David Morrissey and Anne-Marie Duff) turn their house into a senior citizens home, filled with an assortment of shy and sickly residents who inch closer to death every day. Unearthing a curiosity with ghosts and the afterlife, Edward studies and tapes the elderly tenants to piece together a larger understanding of mortality. Into the home comes Clarence (Michael Caine), a former magician who’s having a rough time getting over the death of his wife. While cantankerous and distrustful, Clarence strikes up a friendship with Edward, hoping to instill the boy with enough confidence and social skill to distract him away from his obsession with death.

Either through the unforgiving process of heavy editing or a simple display of scattershot filmmaking, something has pushed “Anybody” off its goal to provide a heartwarming, thought-provoking time at the movies. Nobody seems to be in control here, with the work of director John Crowley (2003’s glorious “Intermission”) feeling as though he’s chasing frantically behind his own picture instead of confidently guiding it. The dramatic groundwork provided by screenwriter Peter Harness is comprised of basic depictions of damaged relationships, imagined inside a comedic/poignant insane asylum of the elderly. All the characters hold a chunk of the story to themselves, leaving the 90-minute-long “Anybody” pressured to make sure all the subplots are satisfied. Crowley is blinded quickly, and while endearingly intentioned, the film evaporates into thin air almost as soon as it begins, piecing together a fragile structure that never seizes the heart.

While the story spins wildly to capture a larger portrait of life and death inside the senior home, the performances from Caine and Milner act as the only anchor to stability. An odd couple, the duo feed off each other’s energy well. Milner furthers his natural skill founded in “Rambow” with his performance here, playing a frustrated boy itching to learn more about the allegedly finality of death. His innocence and burgeoning maturity contrasts well with Caine, who reads the lonely, crusty widower role with marvelous cantankerous winks and devastating plunges of grief. The storytelling is severely undernourished when it comes to Clarence and Edward, but the acting couldn’t be better, undercutting a wellspring of pathos with finely tuned fits of explosive insecurity.

To watch “Is Anybody Here?” trail off into confusing fragments of subplot and malformed characterization invites a great deal of disappointment in the final product. Crowley is heading for a note of sympathy with this stuttering tale of universal heartache, but without needed substance and focus, there’s nothing to emotionally devour. 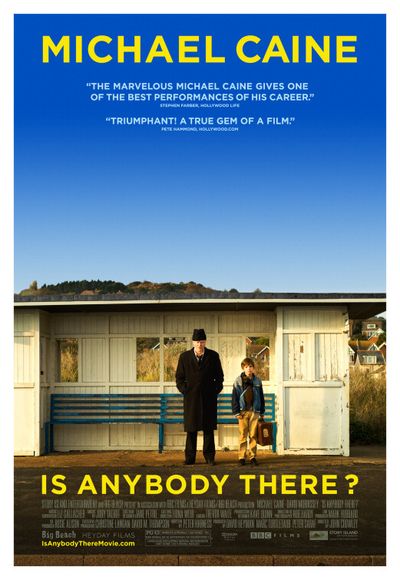