Film Review - Ghosts of Girlfriends Past

“Ghosts of Girlfriends Past” is a Matthew McConaughey romantic comedy that would be better off without Matthew McConaughey. It’s come to a point in this performer’s career where his inability to alter his natural spray-tanned ooze has rendered his acting tiresome and ineffective. Combine that with a desperately unimaginative screenplay, and “Ghosts” is a flavorless feature that’s easily and welcomingly stolen by the vibrant supporting cast.

A lothario with a cushy fashion photography job, Connor Mead (Matthew McConaughey) is living the bachelor dream life, using his ability to easily pick up women to feed his ego. Arriving at his brother’s wedding, Connor runs into old flame Jenny (Jennifer Garner, doing emotionally wounded wonderfully), who stirs up unusually acute feelings within the playboy that he promptly swats away though flirtations with the nearest female. Into his life on the eve of the ceremony comes beloved, and quite dead, Uncle Wayne (Michael Douglas), who promises visits from three ghosts (including Emma Stone and Noureen DeWulf) who will open Connor’s eyes to his insensitivity. Taken on a merciless tour of his empty existence, Connor looks to Jenny to help him find what real love means.

While based on the beloved yuletide perennial, “A Christmas Carol,” “Ghosts” has been stripped of any Dickensian whimsy, replaced with a gooey, brown marshmallow substance commonly referred to as “Matthew McConaughey.” While striking box office gold with pabulum such as “How to Lose a Guy in 10 Days” and “Failure to Launch,” the sameness of the material has wounded this once delightfully impulsive actor. With “Ghosts,” McConaughey finally sheds the last of his tantalizing charisma, delivering a one-note performance of blow-dried reptilian strut that the audience is always one step ahead of. He’s dull in a film that requires a silver screen roman candle of a leading man, who can shake up the paint-by-numbers screenplay and own every scene he appears in. Watching “Ghosts,” I kept getting the feeling McConaughey would rather slink out of frame and take a nap than trade googly eyes with a game Garner.

It feels a little unfair to pile on director Mark Waters when his star is clearly taking more interest in cold medicine than the screenplay, but “Ghosts” doesn’t display the right guidance or magical bounce expected from its spirited premise. Confronting Connor with his wasted life should encourage far more fantastical energy than Waters is summoning. He’s trying to build a bridge between slapstick and romantic yearning, but the story never finds proper footing, taking more interest in bridezilla clichés and nostalgic bullet points (Connor’s sexual awakening takes him back to the ‘80s, and yes there’s a Michael Jackson single glove joke) than a satisfying construct of teary giggles. Much like McConaughey, Waters never struck me as a man invested in his own work.

Thankfully, “Ghosts” is teeming with a supporting cast who know how to loosen up the constricting vibe Waters is encouraging. As the womanizer extraordinaire Jedi to Connor’s eager teenage Padawan, Michael Douglas pulls off a convincing Robert Evans impression while sneaking a refreshing impish spirit into the film; Emma Stone dons a frizzy red wig and geeky braces to portray the titular phantom (Connor’s young devirginator), adding another scene-stealing role to her growing list of accomplishments; and Lacey Chabert, here as the bride to be, digs into broad displays of comedy and lives to tell the tale. She’s immense fun as the nuptial hurricane of the weekend, turning a formulaic shrill role into something appealing and genuinely funny.

Genuinely funny is a quality “Ghosts” could’ve used more of, for as soon as Waters lays on the melodrama to bond Connor and Jenny together, the film begins to suffocate. It’s all delivered with terrible insincerity by McConaughey, making it impossible to root for anything in the loathsome break-up-to-make-up finale, beyond the reappearance of Douglas and Stone to come and save the movie. 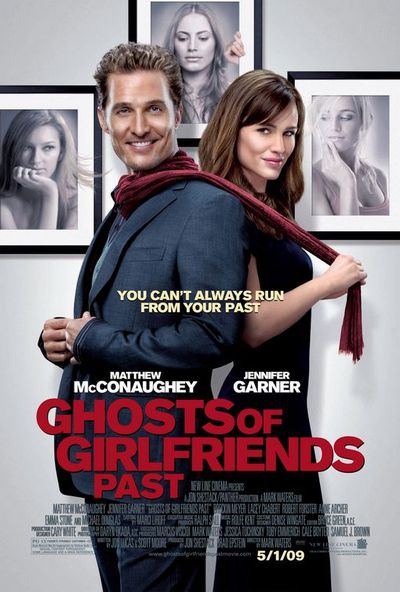 That is such a hilarious still to use for this movie!