I’m somewhat torn over the Disneynature release, “Earth.” One side of me thinks a chance to sit down with Mother Nature and observe the majestic movement of life on our planet is a wonderful event, especially for younger audiences today feeling a little disconnected with their surroundings. The other side of me is miffed that “Earth” is a retooling and polishing of footage from the landmark, eye-popping BBC series, “Planet Earth.” Indeed, if you’ve seen the television program, you’ve already seen “Earth.” However, is the lure of a big screen viewing enough to swallow a second helping?

Using the framework of life on Earth captured over the course of a single year, the film sends packs of cameramen to the four corners of the globe to witness animal life at its most primal, entertaining, and authentic. The results are expectedly stunning, with arctic, desert, plains, and jungle vistas filling the frame with their heavenly might. “Earth,” with only 85 minutes to build a case, jumps from location to location in a desperate bid to tie together a universal theme of survival as footage of lions, elephants, birds, and bears unspool with equally comical and frightening results. This is, after all, the circle of life, and while it’s kindly to watch adorable creatures partake in adorable behavior (polar bears sliding around in snow!), the reality of existence is far more dangerous.

While sanitized for a G rating, “Earth” does mingle with life and death, showcasing elephants who lose their sense of direction, bears who might not find a meal, and leopards who hope to snuff out some young prey. The picture holds back from the bloody endgame, but the tension remains, as lovable creatures face their doom while the planet spins round and round. “Earth” is careful to counterbalance the carnage with platefuls of cute, found most potently in a sequence where mandarin ducklings get their first taste of flight, hurling their lightly feathered bodies out of a nearby tree, plummeting unharmed to the soft ground. The moment is golden, and “Earth” is filled with this level of awe -- a natural reaction to life lived on the most instinctual of terms.

Regardless of visual majesty, a sizable portion of “Earth” has not been developed with new footage. I only caught select episodes of “Planet Earth” and still noticed a few sequences previously viewed, leaving me to wonder what value the film has to those who devoted time to the entire television series. Narration by James Earl Jones is playful and booming, and the opportunity to sit in a theater and let nature’s way wash over the senses does not come around often enough. I give “Earth” a passable recommendation for those reasons alone. It’s reheated goods, but it still puts forth the miracle of life in a compelling manner. 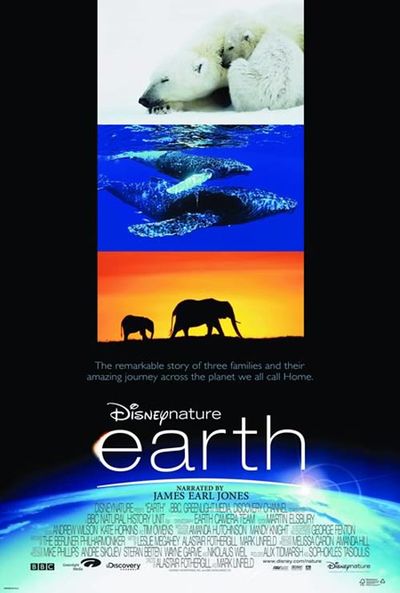