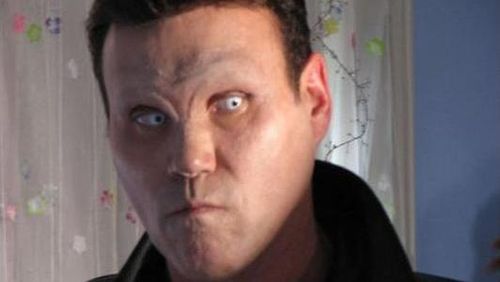 One of the common complaints thrown at movie critics is the inability to appreciate a film just for being a film. To celebrate how someone tackled the unimaginable effort to craft a lengthy piece of art, only to bravely send it out for the world to scrutinize. The sentiment makes some sense to me, but the reality is far too punishing to allow such lenient consideration to flourish. The Christian recruitment feature “C Me Dance” is one of those movies that’s hoping to skirt by on mercy, submitting uplifting themes and proletarian performances to rodeo clown while tirelessly showcasing idiotic filmmaking and zero-budget production value. Soul food or not, this movie is a joke.

An aspiring ballet dancer trying to navigate the complications of high school social circles, Sheri (Christina DeMarco) has been diagnosed with Leukemia, given only a few short weeks to live. While clinging to her widowed father, Vince (Greg Robbins, who looks like a cross between Floyd “Red Crow” Westerman and Buddy Hackett), for support, Sheri prays to find her purpose in life. Her salvation arrives with an ability to save souls with only a touch (conjuring a mental image of Christ nailed to the cross), sending Sheri and Vince on a tear to spread the word of God as far as possible, using a local church as their base of operations. While Sheri ascends to savior status, she’s plagued by memories of her dead mother, leading to the materialization of Satan (Peter Kent), who hopes to overpower Sheri’s belief.

“C Me Dance” aspires to motivate viewers to seek out the thickly robed arms of Jesus with themes of sympathy and personal salvation. It’s a modest picture with familiar intentions, looking to cash in on the semi-profitable wave of Christian cinema currently slipping into multiplexes, but it’s most certainly not a high-quality movie. Written and directed by star Greg Robbins, “C Me Dance” is such a colossal howler, it makes one reconsider the sanctity of the theatrical distribution system. How did this feature film, made for less money than it takes to purchase the average suburban home, go from idea to theaters without anyone actively questioning Robbins’s mental health?

Robbins, who holds a questionably defined history in the entertainment business, is an atrocious filmmaker, bumbling every last static moment of “C Me Dance.” Failing to comprehend the basics of framing, spatial relationships, editing, scoring, performance, and screenwriting, Robbins simply coasts on the forgiving attitudes of the target demographic. Sure, it’s a pip to drag the shameful names of Uwe Boll and Ed Wood through the mud when yammering about trash cinema, but this Greg Robbins fellow is head and shoulders above the competition. My apologies to Eddie and the Bollster.

Most of “C Me Dance” holds the grueling consistency of a YouTube production, with atrocious amateur actors (with the exception of Eddie “The Big Ragu” Mekka) left alone to articulate the sour script with increasing Mayberry shrillness; the story itself is in a grotesque state of disrepair, often cribbing iconic biblical highlights (Sheri discovers her powers at 3:16 AM) to patch weird narrative holes; the cinematography is abysmal, at one point switching awkwardly over to an entirely different image quality for a clumsy fight sequence; and Sheri’s powers are laughable, managing to lower crime and rape statistics instantly with her message of Jesus, not to mention persuading Hollywood to stop releasing films with inappropriate values. Oh, and she’s able to halt the distribution of pornography. Damn you, Sheri!

Our hero’s power is actually one of deceptive mind control, which is either startlingly crisp satire from Robbins or uncomfortable Christian subtext. You decide.

The list of cinematic offenses is lengthy with “C Me Dance,” which is so relentlessly dreadful it almost needs to be seen to be believed. However, that would require 85 minutes of your time that I cannot recommend be wasted on something as ludicrous and shamefully unprofessional as this movie.

The "C Me Dance" Theatrical Trailer:

Oh man, where did you find this? I posted something similar on my site about a film called "The Message." Seems like the religious right has found the horror demographic to be sinners! Lol.
-Mike

Ah ha ha ha ha ha! The girl in that trailer is SO bad! Why would they lead with that? Like, "Yeah, this looks un-watchable...but look how exciting it is by the end!" How hard is it to get a passable leading actress? Aren't there like 1 million of them trying to find work in LA? Next time they could just call my highschool drama club. I'm sure one of the chorus girls from Hello Dolly would've be happy to take a weekend out of her life to make this piece to crap. At least then I could have sat through the trailer without laughing out loud.

I am so sorry for you, man. So sorry you had to sit through a feature film staring this girl, not even mentioning the rest of this turd.

I will pray for these poor filmmakers tonight...

You know, the fact that people dismiss such amateurish filmmaking over the fact that it's grounded in Christian values is truly a spit in the face of the religion. And I'm Christian as well.

Like Tyler Perry's films are the same-old-same-old "black women yell and overact non-stop to make a point" shtick, but they hide behind the Christian values so they can lure in Perry's fanatical zombies.

Then there's a Kirk Cameron film that Brian here didn't see (Bless you, Brian, I heard that film was AWFUL, the only one of its kind to maybe get Razzie nods). Basically, you have such whiny, self-absorbed people who need the power of God to get them through. No offense to those, but the way it's presented makes it come off as a fantasy, though one that needs to be taken like it would really happen. And Kirk Cameron used to be a charming teen idol, but now he's become a Tyler Perry-esque preacher to these Christian nutjobs.

Now this "C Me Dance"? Truly, if anyone out there buys this film and thinks what I said above is blasphemy, then I'm turning over to atheism. Because I don't need to be converted into a maniacal Christian nutjob who thinks he's better than everyone because of his religion and that he sees hackjob Christian films like this as if it were catnip. I'd like to meet the people who do, however, and introduce them to the pavement.

Sorry for the rant.

Oh man, that trailer is absolutely painful to watch. I feel sorry for the brainwashed, god-fearing nutjobs that will buy this hoping to get some sort of message or christian empowerment out of it. Mike, your rant is perfectly acceptable!