The easy sell for “Battle of Terra” is to compare the film to “Wall-E,” blended with a heaping teaspoon of the “Star Wars” prequels. This latest go-around with an independent CG-animated epic certainly holds lofty sci-fi aspirations, but it’s executed with unexpected grace and patience that lends the thematic objective a genuine weight. “Battle for Terra” isn’t blessed with the most luxurious animated resources around, but it’s a mature, active piece of storytelling and a nice surprise in the cluttered family film multiplex sweepstakes.

On the peaceful world of Terra, young Mala (voiced by Evan Rachel Wood) is a curious creature, possessing assertive intelligence that worries her father (Dennis Quaid). When a strange spaceship enters the atmosphere, Mala fearlessly attempts to study what has arrived, only to find aggressive militaristic humans contained within, looking to terraform a new planet after Earth’s demise. Frantic to retrieve her father after his abduction by the humans, Mala discovers James (Luke Wilson), a wounded soldier who promises to help the creature find her family in exchange for assistance returning to his base. Mala agrees, and finds James the lone human willing to reconsider the violation of her home world, overseen by the wicked General Hemmer (Brian Cox).

The screenplay for “Terra,” written by director Aristomenis Tsirbas and Evan Spiliotopouls, isn’t groundbreaking material in the least, yet the mixture of eco-panic and psychological pull is a convincing statement, packaged inside a rousing, yet enchantingly forbidding adventure film. Tsirbas directs confidently, orchestrating a sci-fi narrative that’s liberal with action and emotional consideration. Granted, the film’s allegorical underpinnings tend to be distributed more heavy-handedly than necessary to plug into the younger members of the audience, but the balance between the explosions and the exploration of destructive human nature feels suitably organic.

While “Terra” has plenty on its mind, I was completely taken with the rotund sensation of the world Tsirbas is creating. Taking the audience to another planet, “Terra” is beautifully designed, from the naturalistic, artistic community of the Terrians (better to contrast with the humans’ metallic, unfeeling edge) to their tadpole-like visualization, which has the characters wiggling endearingly around the frame. The inspiration behind the animation trumps actual results at times, but the majority of the picture is an absolute feast for the eyes. Tsirbas embraces big screen majesty, envisioning colossal hostilities between the species, amplified greatly in the film’s last-minute 3-D embellishments. It may not possess the budget to overtake animation titans Pixar and Dreamworks, but “Terra” has a rich sense of purpose and intelligence, carried out by talented filmmakers and their clear adoration for the medium.

I was surprised just how much I grew invested in the story of “Terra,” watching as Mala and James engage in a seismic collision of ethics as their respective armies heat up the war machines to control the region. It leads to a stunning moment of personal sacrifice unheard of in this genre, and the bravery of the filmmaking erases any doubt that “Battle of Terra” is something unique and haunting in a sea of colorful conformity. 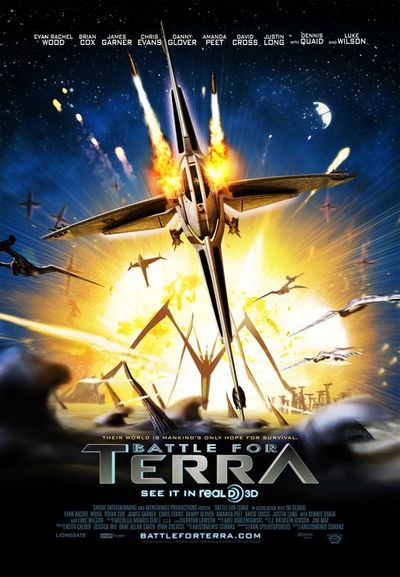