I hate to mention it out of respect to the producers of “Alien Trespass,” but the 1950’s sci-fi lampoon genre was bled dry by the astoundingly unfunny 2004 picture, “The Lost Skeleton of Cadavra.” Thankfully, “Trespass,” while wading dangerously in toxic self-aware waters, heads the opposite direction, imagining a B-level monster outbreak movie as a real artifact from the bygone era. The patience and concentration of the film to not wink itself into a coma is amazing to behold, and I was flabbergasted over just how engrossing and playful the picture is. The exterior promises another punishing “Cadavra” headache, but the feature is quite skillful and inventive. And most importantly, it’s not entirely camp.

When a flying saucer hits a small Californian mountain town, the local police (including Dan Lauria and Robert Patrick) attempt to squelch rumors and proper investigation by forbidding the community to approach the ship. However, resident astronomer Ted Lewis (Eric McCormack) finds his way inside, only to have his body inhabited by interstellar hunter Urp. Returning to town, Urp exhibits strange alien behavior while tracking the Ghota, rubbery one-eyed creatures that have come to Earth to destroy all humans. While the town panics, Urp teams up with waitress Tammy (Jenni Baird) to capture the dangerous Ghota and blast them into space where they belong.

“Alien Trespass” opens with faux newsreel footage from 1957, immediately setting forth the hope that director R.W. Goodwin (a vet of television productions) might be able to grab the audience and make them believe in the giddy spirit at the core of what he’s about to manufacture. There’s no Ed Wood-style bad movie parade or insipid self-congratulations here: Goodwin wants to recreate the square vibe of a 50’s alien invasion chiller. Barring the presence of modern technology during the saucer sequences and unavoidably glossy cinematography, he achieves his goal with style and charm, making “Trespass” more of a valentine than a smirking mockery.

Goodwin’s dedication rewards the viewer with traditional monster movie escapism, generously dishing up a retro feel to “Trespass” that pays splendid homage to the creepers and chillers of yesteryear. The filmmaker truly believes in what he’s making and is not just playing the concept for cheap, dull jokes. It’s an achievement worth celebrating in today’s ironic times, and I appreciated the effort. That’s not to suggest “Trespass” is a dour motion picture; in fact, it’s quite lively, liberally deploying small town cop and dim-witted civilian archetypes within a low-budget movie setting, leaving room to play with, not underline, artificial locations, limited photography, and stiff acting. “Trespass” remains a good-humored romp because of the affection, whisking the viewer back to a day when a guy in a rubber suit was the height of terror, and the only thing more heinous to an adult than a body-melting monster was a teenager in full greaser attire.

Credit must be paid to the ensemble of “Trespass,” who turn in fantastic work blending era-specific theatricality with straight-faced commitment. Noted ham McCormack is perhaps the strongest element here, deftly working his nerdly, pipe-sucking routine as Ted while his robot monotone wins as Urp. There’s not a single point in the film where any of the actors shatter Goodwin’s spell. The cast remains committed to the concept, and the filmmaking encourages their efforts.

After being burned so thoroughly by “Cadavra,” the thought of another 50’s B-movie recreation carnival brought me nothing but absolute dread. Mercifully, “Alien Trespass” is a delightful experience, lovingly made by clever individuals who know how to throttle their enthusiasm creatively, not obnoxiously.

Reviewed at the 2009 Florida Film Festival 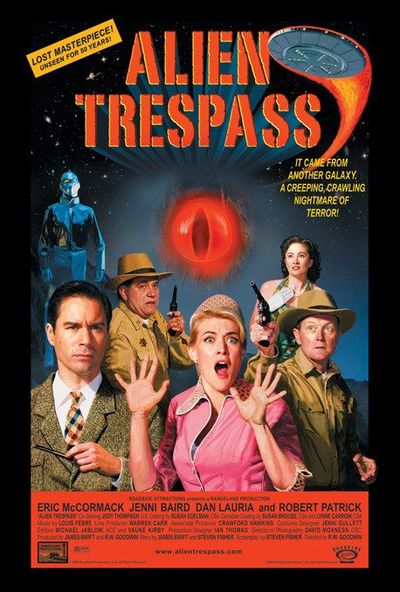