Forget all about the age-reversing hocus-pocus that’s going on during “17 Again.” The real fantasy at play in this picture is the concept that Zac Efron is supposed to be the younger version of Matthew Perry. Sure. If you can hurdle that whopper, “17 Again” is a generously spirited comedy that’s more victorious as a debutant ball for Efron’s big screen career than a true gut-buster. The picture charms easily and makes a decent pass at a heart. Considering the director and the iffy premise, I think the idea of “17 Again” being anything other than migraine-inducing is worth a few minutes of applause and smiley reflection.

Frustrated with the failure of his life and his marriage to high school sweetheart Scarlett (Leslie Mann), Mike O’Donnell (Matthew Perry, in a brief cameo) makes an audible wish to be young again, desperate for a chance to reboot his life. The wish is magically granted by a spirit guide (a Santa-like Brian Doyle-Murray), turning Mike back into a teenager (Zac Efron). Seeking the help of geeky friend Ned (Thomas Lennon), Mike elects to enroll in the same high school as his children (Sterling Knight and Michelle Trachtenberg) to keep an eye on his family. Looking to instill his son with confidence and keep his daughter away from a lothario, Mike starts to insinuate himself back into his own house, eventually hoping to reconnect with Scarlett; however, his efforts strike the family as particularly strange, leaving Mike unable to comprehend why his wish was granted in the first place if he was destined to fail all over again.

While the temptation is there to label the feature as a body switching comedy along the likes of a backwards “Big,” “17 Again” isn’t aiming for a whimsical handle to the laughs. Under the direction of Burr Steers (the odious “Igby Goes Down”), “17 Again” is more at home within a sitcom arena, featuring a broad plot of cockeyed redemption to underscore the flashy comedic fireworks display. Steers mutes all his tendencies to smother the actors in stillborn affectations and lets the cast roll with the punches, permitting a harmless screenplay to be executed safely and often winningly. In the seven years it took Steers to follow-up “Igby,” he’s learned to trust his ensemble, allowing for generous spurts of glee to escape what is honestly an eye-rolling concept.

The plot concentrates on Mike’s foggy, befuddled path to salvation, but the film appears more infatuated with Efron and his performance elasticity. As bright-eyed and bushy-tailed as Efron was in the “High School Musical” pictures, his work in “17 Again” reveals a dazzling comedic presence and an overall ability to command a scene. Backed wonderfully by Mann, Lennon, and Melora Hardin (here stealing scenes as Mike’s principal and Ned’s nerdly object of affection), the film gives Efron a wide berth to just do his thing. And that thing seems to be the capacity to make a dusty screenplay shine with his gusto and silly portrayal of man-boy bewilderment, while throwing a few well-timed reactions around to beef up the laughs.

Efron keeps the film upbeat and eager to please, but it’s comforting to see “17 Again” not entirely turn its back on the inherent creepiness of a teen father spying on his teen kids. While dealing with bullies, basketball tryouts, and abundant caloric intake, Mike also has to confront burgeoning affection from his own daughter, a thorny consequence of his renewed attention to their romantic activites. Steers keeps the subplot nicely distanced and humorous, but the very appearance of such a twist demonstrates that “17 Again” has a delightful sense of mischief to share. Eventually the film devolves into third-act sniffles to ease the premise back onto solid ground, but a generous helping of actorly vitality and a dash of troublemaking elevates the picture away from its skim milk origin. 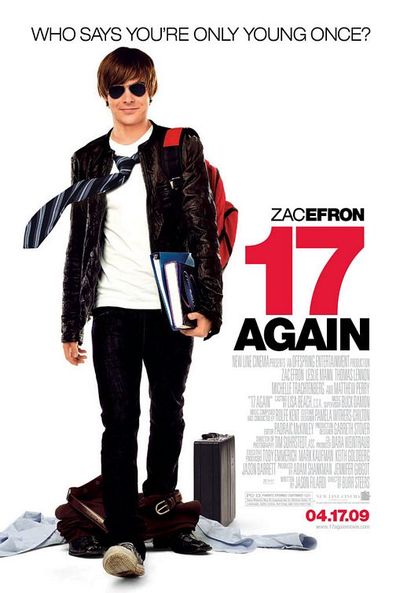 if Zac Efron plays his cards right, he will be one of the most sought after actors in Hollywood