It was my first voyage to the FX International Convention, an enormous event in Orlando that brings out considerable crowds to experience a sheer wall of merchandise, celebrity apathy, and a legion of hungry comic book artists clamoring for the almighty dollar. It’s a monetary free-for-all that bravely thumbs its nose at today’s economy, presenting a buffet of celluloid heroes and plastic, “Made in China” divinity that demands persistent cash machine attention.

Because in space, nobody accepts credit.

FX is an oddball convention that doesn’t trumpet flat-out nerdiness like other genre assemblies. The show likes to pretend it’s a gourmet celebration of autographing and toy dealing, free of the unshowered bondage that normally ostracizes planned gatherings such as this. Truth is, FX swims in the deep blue sea of geekdom with little hesitation, eating up every last bit of square footage the Orange County Convention Center permits with a maze of sights, sounds, and…smells that bring to life a classic convention atmosphere. It’s an impressive amalgamation of genre superstars, unnecessary cleavage, and snake oil salesmen. 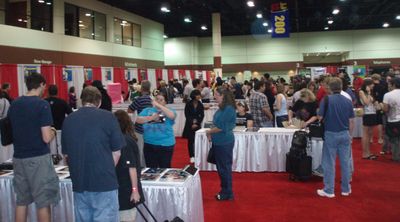 The real draw of the convention seems to be the celebrities, ranging from big screen and television performers to comic book creators. The big names command the big attention, and apparently the big bucks as well. Note to any aspiring actor out there: get thee to a sci-fi show as fast as humanly possible. The crowds at FX overwhelmingly favored cult names such as Julie Benz, James Kyson Lee, and Juliet Landau, not to mention lengthy lines to meet the “Firefly” ladies, Morena Baccarin and Jewel Staite. And by long lines, I mean a train of eager, bearded men waiting for their chance to breathe bad breath on their masturbation fantas...favorite actors. The major player in this genre of autograph awareness was James Marsters, who came to fame on “Buffy the Vampire Slayer” and was recently “seen” in the flop “Dragonball Evolution.” Mr. Marsters is apparently made up of 10% hair gel and 90% gall, requesting his faithful fans cough up $40 for an autograph (an extra $5 for the glossy). 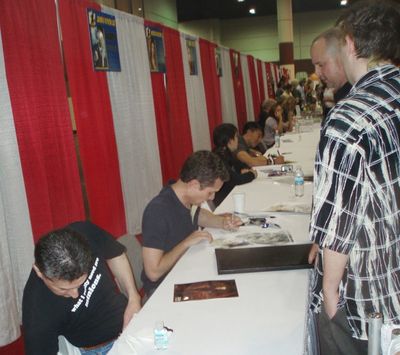 Obviously many of these performers see the conventions as a fertile source of revenue, and I’m aware that we all have bills to pay. However, spending a few moments watching the excitement of fans permitted to interact with their idols left me wondering the true purpose of the fleecing. Is it market demand or cruel swindling? Perhaps this is a useless complaint, since everyone at the convention appeared to hold little hesitation with the numerous requests for cash from the celebrities. I don’t want to be a wet blanket here, but the intricate pricing racket often alarmed me. Still, to watch the fattened-wallet excitement of those gearing up to meet “Star Trek” legends Jonathan Frakes and Leonard Nimoy is an apple-cheeked, ill-fitting-Starfleet-uniform flush of fandom I could honestly watch all day.

Of course, that pinwheel of glee wasn’t extended to every famous face at the convention. Actors Cerina Vincent and Camden Toy spent more time pretending to take calls on their cell phone than signing for a fee, and professional wrestler Jake “The Snake” Roberts, looking about one hastily scribbled application away from joining the ranks of the nightmare producers at “Monsters, Inc,” appeared bored out of his mind sitting at the very end of the autograph table line-up. In many ways, celebrity autograph row came across as a miniature version of a high school caste system. Spock was clearly the prom king.

The rest of the convention featured a familiar hodgepodge of talented artists trying to sell their drawings and comics (most featuring bosomy women doing bosomy things), costumers offering elaborate fantasy wear, and toy salesmen presenting a time machine of playthings that I had trouble keeping away from. With the “Kids of the ‘80s” movement now slowing down to a crawl, the FX gathering maintained a glimmer of hope that interest is still alive for obscure items such as “Dune” toys and gun replicas from “V.” Not surprisingly, colorful “Star Wars” merchandise still grabs the largest amount of shelf space (truly the best collection of toy lines around), but renewed interest in “G.I. Joe” was felt throughout the various booths, along with an appropriate fixation on the new “Star Trek” picture. The fanboy goods were just amazing to behold, encouraging a desire for my carefree youth again and/or piles of money to spend freely on absolute crap. Because everyone needs a “Dune” spice mining toy, right? 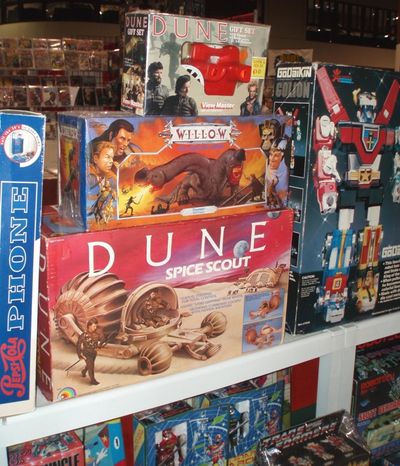 The remainder of the long afternoon was well spent on costume ogling, huckster avoiding, and nerd envy. The FX show is only my second taste of the convention experience, and outside of a serious halitosis outbreak (a few of the vendors wisely pushed free mints at their tables) and a few grumbly words from Frakes, I think I’m hooked. Where else can a wannabe geek get his fill of vintage AT-AT toys and spy an all-female tribute to “Tropic Thunder?” Here are a few more pictures from the event. As always, forgive the loopy photography skills. 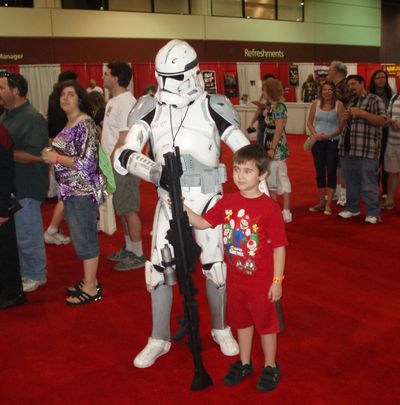 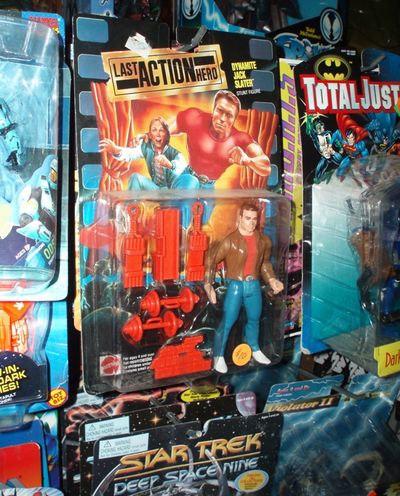 I had no idea there was a toy line for this underrated flick. 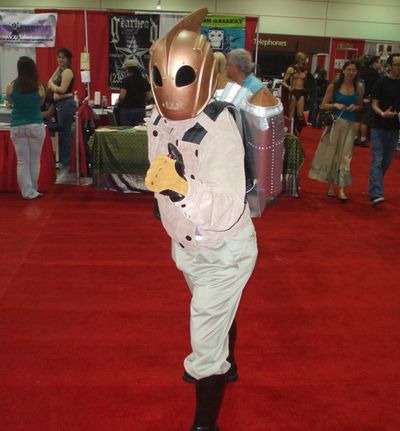 This guy had the Beemans gum and everything. Fantastic! 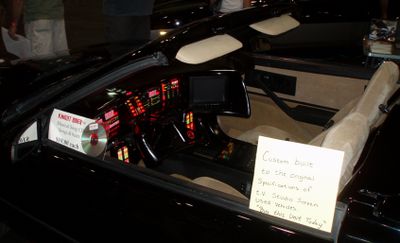 Turn your car into KITT. 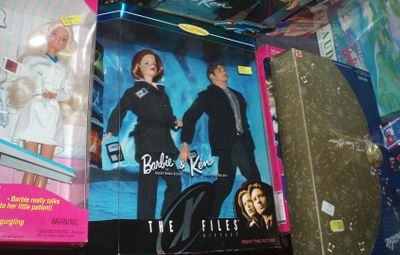 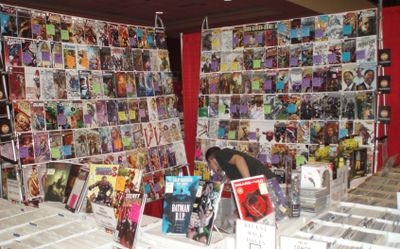 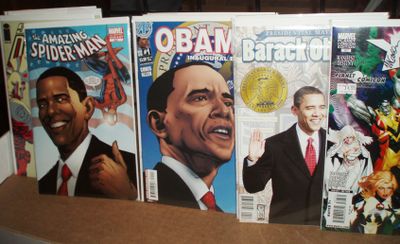 The dealer tried to convince me these were valuable, hard to find comics. 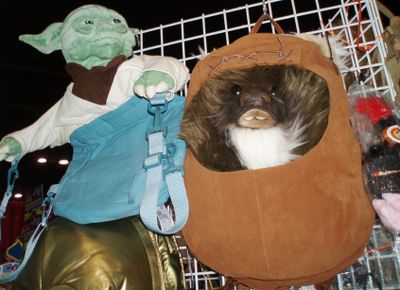 Best backpacks of all time. 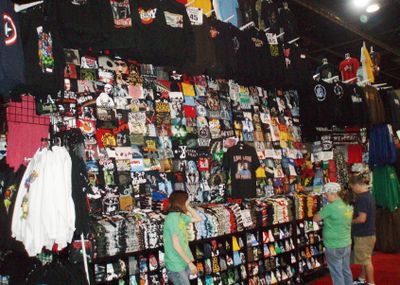 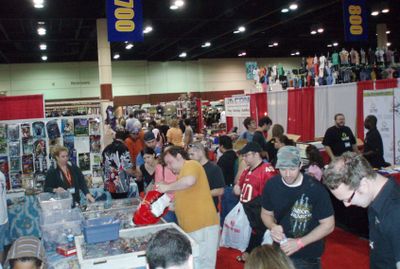 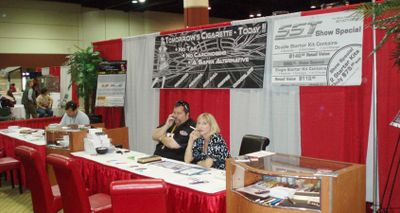 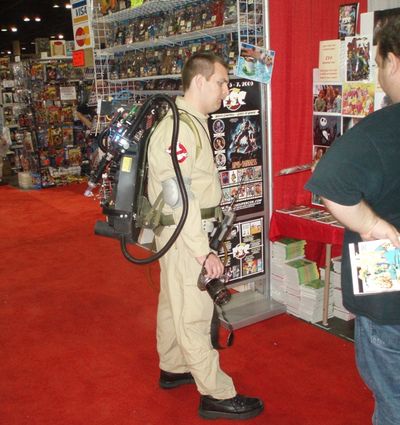 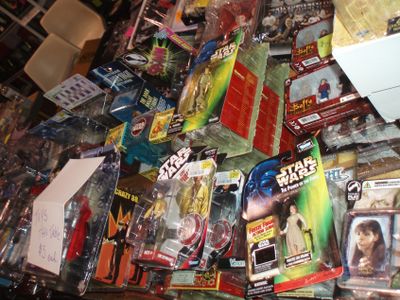 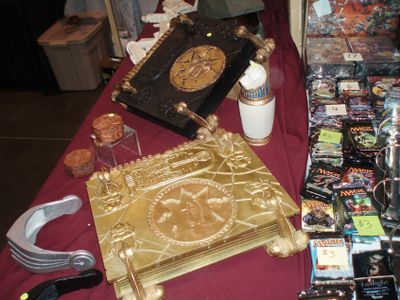 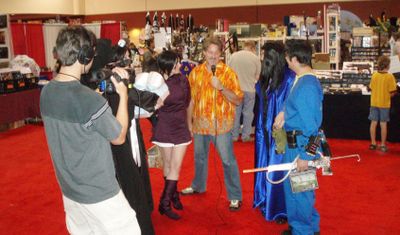 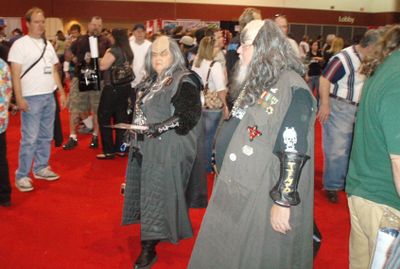 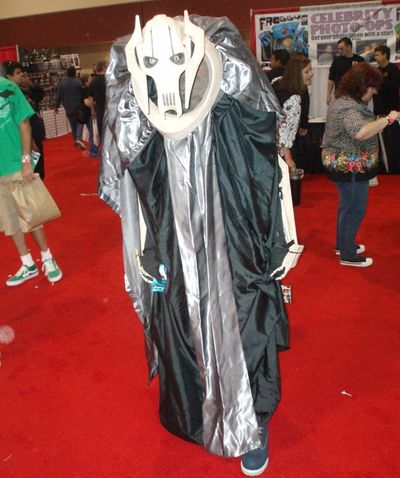 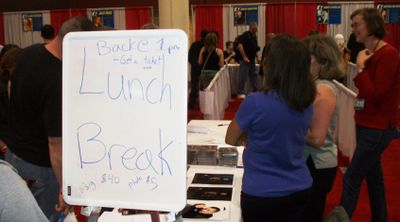 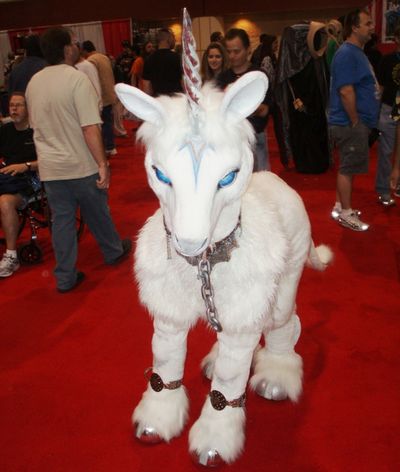 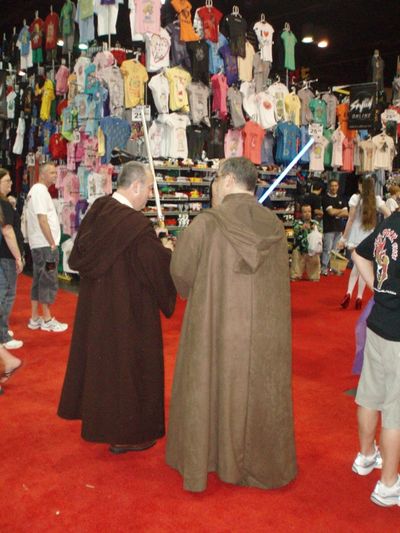 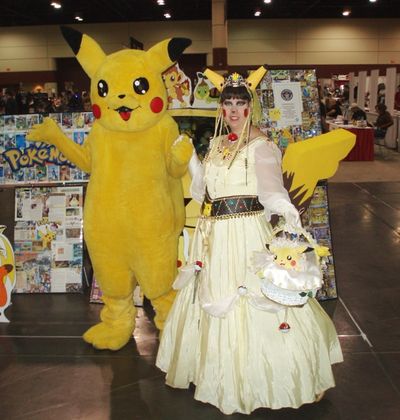 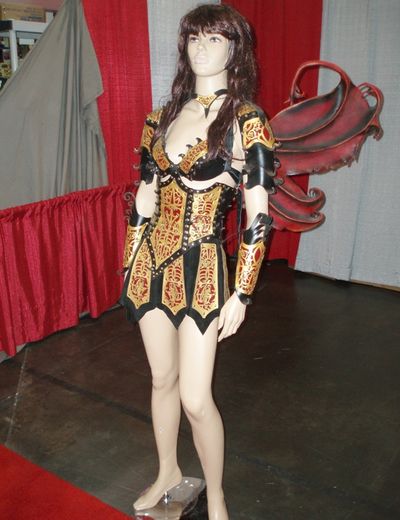 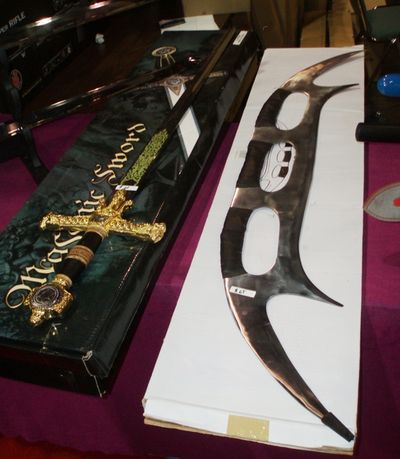 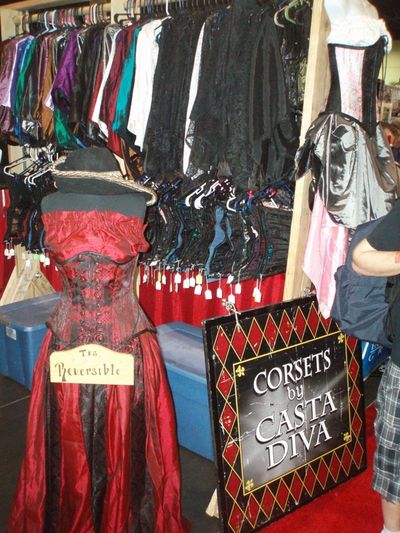 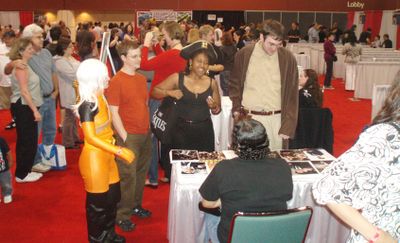 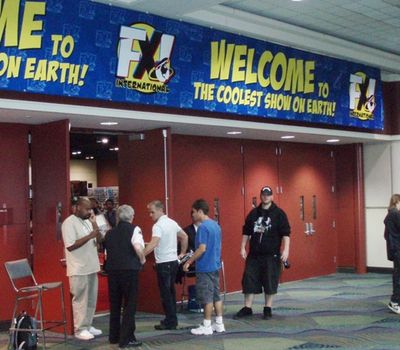 Great photos and review of the con scene and the $$$ that makes cons go on forever. I've wondered just how much money changes hands at these events and who the profiteers really are. While this event looked awesome, you really must do Dragon Con. It is the biggest of all, and makes all others hide in shame. As for fans and their idols, I've paid for many an autograph & photo from Mr. Marsters, and will continue to do so, because he's much more than hair gel and gall. He's a wonderful actor, great entertainer, and deserves to be paid for sharing his talent and time. Besides, he appreciates and respects his fans, gives them eye-to-eye, and even remembers names--that's why we save to see him. We know it will cost us, but it's worth it, as is the comaraderie shared with on-line acquaintances we meet up with at these events. Frankly, given the sorry state of our economy, I'm glad there are events like these for fans to attend--yes, they're frivolous, expensive, and silly--but they're a helluva lot more fun than watching reality TV. Thanks again for a wonderful, insightful and well-written review.

I don't think I'd even pay $45 for Patrick Stewart's autograph! Well, maybe if I got to take him to dinner, too...

Dude, chillax. No one is forced to pay for an autograph, let alone go to these things. Clearly the people waiting in line and paying are happy enough to do it, so let them.

I agree with Tonie..I myself have paid out many time for Mr Marsters auto's and photos ops..Did you actually get to meet him? Have you even seen Dragonball? I asume yo haven't or your assumptions wouldn't be so negative..James is a very virsatile actor. He is also very aware and caring about his fans..No one is being forced to pay for anything they don't want to. Most con goers know what the prices are before hand and are happy to pay it..
These cons all come down to three things fun,friendship and partying..

Who the heck is a James Marsters? Sheesh, if complete nobodies can command 40 bucks, did Nimoy ask $1000 per autograph???

I've been to many cons, and I hate the pricing for celebrity autographs. It takes all the fun out of it. Marsters just sounds greedy.

Love the recap, Brian. I hope you do more of these.

Marsters is made of W.I.N. Judging an actor you don't know, eh? You just come off sounding bitter, and frankly, silly.

Awesome recap! You absolutely make me want to be there.

On a Marsters note (since that's what everyone else is posting about); I'm a huge fan of TV, but I can't think of ANYONE that I would pay $40 for the privaledge of their scribbles on one of my slash-fiction books. And what if I've made 19 portraits of Spike in various stages of undress? Would he sign them all for $40 or each for $40? I'm not in these celebrities' shoes so I don't know where they're coming from, but it seems a tiny bit taking advantage of your fans to me...not judging. Just putting it out there.

On the other hand, by the looks of these comments (and the photos of all the lines), it seems like there are more than enough people willing to fork over the cost of a dinner for the whole family at home to meet this dream-boat. I'm sure Mr. Marsters (and whatever bank owns his mortgage) is eternally grateful.

Haha, I was totally one of those girls in the Tropic Thunder tribute girl (Downey's character). Gla dyou liked it. This whole article was awesome actually. It was fun con!