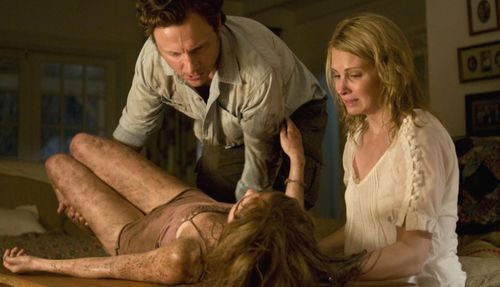 Arriving at their remote lakeside vacation home for a weekend getaway, John (Tony Goldwyn) and Emma (Monica Potter) Collingwood have entrusted swim champ daughter Mari (Sara Paxton) with the car for the evening as she meets up with her small town friend, Paige (Martha MacIsaac). Taking up an offer from sullen heartthrob Justin (Spencer Treat Clark) to return to his hotel for primo marijuana, the girls are doomed  when Justin’s prison escapee father Krug (Garrett Dillahunt) and his band of psychotics arrive, commencing an afternoon of horrific rape and murder in the nearby woods. Wounded during the fracas, Krug’s “family” seeks shelter at the nearest house available, ending up on the doorstep of the Collingwood residence, with the worried parents welcoming the gang into their home without knowledge of the agony that was inflicted on their daughter.

It’s difficult to take the new “Last House on the Left” seriously, although the material demands it. This is a spectacularly grisly feature that hopes to trump the Craven picture in every possible way, assuming a brutal attitude that delights in torture, revenge, and ogling the soft parts of the young female performers. While I’m thankful someone in the production had the sense to remove the “Hee Haw” elements that turned the 1972 film into a disturbingly miscalculated joke, the 2009 version (with any traces of Ingmar Bergman seeds fully flushed out of its system) elects to replace disconcerting redneck comedy with a lustfully hostile tone that’s both embarrassingly clichéd and dreadfully executed. Surely Craven’s patchy, wandering film could only be improved upon? Under the guidance of director Dennis Iliadis, the answer is a resounding “no.”

Iliadis is one of those visually obsessive filmmakers who would rather spend hours designing focal point camera tricks than tightening his script or inspiring his actors to the proper plateau of organic motivation. His direction of this remake is shamefully amateurish, leaning heavily on the ghastly aspects of the plot to cloak his repeatedly numbskull staging, which requires a lobotomy and an eye patch to accept at times. Iliadis undoubtedly embraces the heat of the moment, but often that moment is corrupted by illogical character impulse or absurd stunt work, which has all the believability and polish of a suburban backyard wrestling show.

Ah, but who cares about the subtle nuances of framing and spatial relationships when there’s a pretty blond thing to violate! Again, this whole enterprise is intended to sicken, to play to primal viewer responses that demand gritted teeth when innocence is shattered and applause when fire is finally combated with fire. Craven’s film understood the tricky magic of exploitation, literally writhing around in virginal entrails and using cruddy film stock to make a faint point about the demoralizing reality of violence. The “Last House” remake is all about pure sleaze, as Iliadis misses the basic concept of Mari’s ghastly misfortune by weaving in lustful close-ups of her barely clothed body throughout the opening of the film. Perhaps a comment on the innate depravity of the audience itself? I wouldn’t give this monkey business that sort of intellectual credit.

When it comes time for the proper, wine-swilling Collingwood couple to dish out payback from their own Williams-Sonoma reservoir of brutality, “Last House” flatlines completely; the clownish action sequences, the wretched performances riddled with community theater-style indication, and the liberal deployment of flat-out stalling from Iliadis to prolong the inevitable (they used to call it “suspense”) make the experience excruciating to observe. In the end I wanted everyone to die. That way I wouldn’t have to watch any more actors attempt to convey a constipated facial expression I assume is meant to pass for “anger.”

Perhaps the ultimate pointlessness of the “Last House on the Left” remake is what really unnerves. If there’s any morsel of artistic intent left within the film by the last act, it’s erased by a distasteful head-explodin’ finale, where the movie reveals itself to be yet another lubed up, dumbed down ride on the trendy torture train. I certainly support any and all horrific visions of rural assault and gut-wrenching parental revenge (ahh, the miracle of “Taken”), but this remake is a banal, insistently juvenile venture that climaxes loudly from its own gaudy sadism, reveling in sexual violence to a blinding degree that spotlights brazen incompetence over any fundamental genre manipulation. 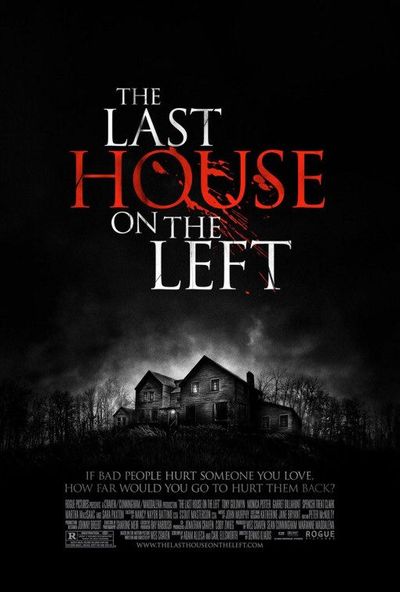 This may come as a shock to you, but some people like lustful close-ups of barely clothed hot blondes. I don't know... maybe it's just me?

Break out your thesauras for this one....??

"but this remake is a banal, insistently juvenile venture that climaxes loudly from its own gaudy sadism, reveling in sexual violence to a blinding degree that spotlights brazen incompetence over any fundamental genre manipulation."

Seriously, it looks like they just followed the plot from the first one, and up'd the gore. I don't see how that couldn't make a film that smacks you in the face. Which is the point of the movie, and would make it effective. I don't think there is anyway for it to be as effective as the first one, and I agree that it probably shouldn't have been made. I still believe it will be a good time at the theater for horror fans.