Trying to keep her infirmed son Matt (Kyle Gallner) as close to a cancer specialty clinic as possible, Sara Campbell (Virginia Madsen) elects to rent a slightly rundown home nearby. With the rest of the Campbell family (including Martin Donovan and Amanda Crew) moving in and attempting to make the best out of a bad situation, Matt begins to suffer from hallucinations, seeing shadowy figures that haunt him relentlessly. When the history of the residence reveals its former use as a funeral home, Matt seeks guidance from a fellow cancer patient, Reverend Popescu (Elias Koteas), who recognizes the horrific signs as a cry for help from a macabre past.

It’d be easy to beat up “Connecticut” as a ho-hum chiller that cribs from the hits of the demonic possession past (“Amityville Horror” comes to mind) to build a flimsy “based on the true story” premise of softball frights. It’d also be easy to loathe the picture for its addiction to cheap scares and boo shocks to rile up audience members unwilling to buy into this phantom zone too easily. Indeed, if there was a drinking game based on the amount of times “Connecticut” jolts out with a piercing sound effect and flash edit of hazy doom, you’d have alcohol poisoning within 15 minutes. It’s that abused.

Once the film’s shortcomings are addressed and appropriately swallowed, “Connecticut” is more easily appreciated as a stylish, engaging horror film that’s eager to simply raise some heart rates. Director Peter Cornwell manages notable work here weaving together a horror tale of property anxiety (perhaps a less effective “Poltergeist”) and domestic unraveling, as suburban lioness Sara not only has to contend with aggressive spirits harassing her kid, but also a once sober husband falling off the wagon and bills that won’t pay themselves. It’s an uphill battle for everyone, and while “Connecticut” might not freak the pants off people, it does skillfully build a plausible opening for freakish events, nicely realized by the ensemble cast, who play up the alarm with a charismatic combination of fear and witless inquisitiveness.

Once the layers are peeled away from the central mystery, and a perplexing oral ectoplasmic ejaculation/sliced eyelid/sepia tone whammy is laid on the material, “Connecticut” loses its footing. Suddenly Cornwell is forced to put down the scares and start assembling his narrative, and while the pieces do fit, it’s just not as stimulating as hoped. It’s impossible to gauge if any of this is genuinely based in truth, but I have my doubts. I would hope that if spirits actually remained in this world and tormented the living, they could come up with something better than the “Tales from the Darkside” yawner conclusion “The Haunting in Connecticut” is saddled with. 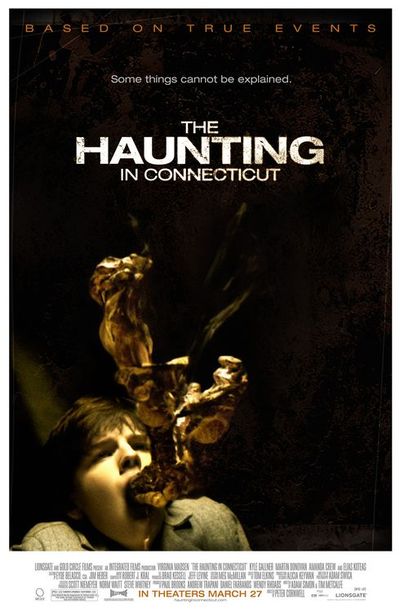