Fearing his stay at law school is killing his dreams, Troy Gabel (Colin Hanks, agreeably milquetoast) elects to break away from his predetermined future, taking a job as a road manager for entertainer Buck Howard to make some cash. A former big shot mentalist on the talk show television circuit during the 1960s and 70s, Buck (John Malkovich) has fallen on hard times, playing to half-filled theaters with his moldy act of magic and musings. Trying to stage a comeback, Buck demands the most from Troy and PR flunky Valerie (Emily Blunt, fetching, but once again butchering an American accent) as he works to perfect a miracle stunt involving hypnosis, with the young man growing to admire his volatile boss, but feeling pressure from his father (Tom Hanks, in a cameo) to return to a chaste life of assured financial reward.

Writer/Director Sean McGinly establishes a sparkling personality to “Great Buck Howard” immediately, generously playing around with the traditions of the faded blowhard star genre and all the screenwriting trappings the concept provides. This is not a riotously ambitious piece of filmmaking, but it has an attractive PG-rated comfort level that McGinly mines well, along with a congenial atmosphere of period nightclub theatricality that keeps the movie entertaining to watch. The filmmaker has affection for the old-time illusionists, basing Buck on the peculiar life of The Amazing Kreskin and taking cues from his act to build a routine for Buck, including a show closer that has the mentalist searching the audience for his hidden paycheck every single night. It’s an affectionate observation of bygone showmanship and weathered egos that sets the stage for the finest parts of the feature.

While the ensemble finds a way to fit into the buoyant tone of the movie, it’s Malkovich and his argumentative celebrity routine as Buck that makes the movie sing. As a performer with one heck of a handshake, a longing for the spotlight, and a desire to make peace with estranged pal George Takei, Malkovich turns on the headlights for this role, finding the proper texture of curdled charms and rehearsed onstage wonderment to use. The character is always an unreasonably demanding nuisance, but Malkovich achieves captivating shadings as Buck starts to recognize his fading stardom, leading to a bitterness that can no longer be tempered with cocktail hour platitudes.

“Great Buck Howard” jettisons some needed intimacy in the last act as it crams a whole career rebound subplot into a brutally condensed 15 minute block of exposition. The storytelling gets away from McGinly, but the wound doesn’t scar, and the picture rebounds with a kindly closure that returns “The Great Buck Howard” to the same summit of genial characterization it opened with. 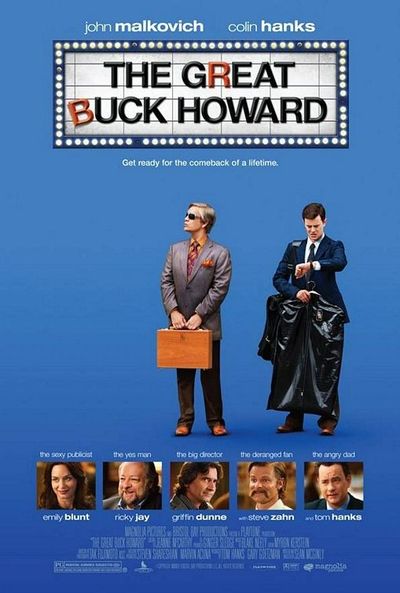