On the day of her wedding, Susan (voiced by Reese Witherspoon) is hit by a meteor, causing her to grow 44 extra feet high and ruin her special day. Abducted by government forces, Susan is sent to a detention center for monsters, including fishman The Missing Link (Will Arnet), mad scientist Dr. Cockroach (Hugh Laurie), gelatinous blob B.O.B. (Seth Rogan), and towering bug Insectosaurus. Hopeful that she might someday be able to return to her life with vain fiancé Derek (Paul Rudd), Susan is instead rechristened Ginormica by team leader General W.R. Monger (Kiefer Sutherland) and sent into battle when an alien nation led by Gallaxhar (Rainn Wilson) attacks Earth. Building a team with her new friends, the monsters attempt to infiltrate Gallaxhar’s defenses, only to find their own powers restricted by mounting self-doubt.

Breezy is an excellent way to describe “Monsters.” Directors Rob Letterman and Conrad Vernon have built a cheerful animated motion picture that keeps the comedic situations coming and the characters in full quirk mode, while tinkering with iconic sci-fi and war movie circumstances that will please the older crowds. It’s a colorful fantasia of slapstick and epic combat that winds up more effective than anticipated, forgoing traditional dramatic interstitials to plow ahead as a pure farce.

Designed with an eye toward 1950’s genre touches, “Monsters” is a visually impressive film, multiplied a thousand times over if viewed in its native 3-D format, where the depth of destruction is transformed into an exhaustively immersive event. Certainly the production is aiming for cartoon standards to separate good (ugly) vs. evil (uglier), yet the minimalism is a joy to observe, playing up the exaggerated  angles of the film. The animation is expressive and fluid, with phenomenal attention to physical humor and, in the case of Ginormica, building-smashing gravity.

The cast assembled to bring the characters to life also contributes greatly to the jolly tone of the harshly titled picture. While I could do without Wilson’s elongated delivery as Gallaxhar (seriously, was there no one else for the job?), the ensemble picks up the slack with merry performances. As the core monster team, Laurie, Arnett, and especially Rogen consistently enliven the picture with their mix of askew heroism and general witless behavior, often stealing the film with their jovial fallibility and fearless teamwork. Even Witherspoon manages to thaw herself and have some fun, making for a gentle and blessedly quick dramatic core of doubt as Susan realizes her immaculate life wasn’t very ideal after all, pushing her into empowerment consciousness.

“Monsters” only stumbles when trying too hard to either be cutesy (it’s the second animated film in under a year to use the “Axel F” theme as a punchline) or satiric (Stephen Colbert as The President invites uncomfortable silences). When back on solid ground, the film is a blast as a straightforward, silly-hearted adventure, literally bursting through the screen to entertain as vigorously as it possibly can. 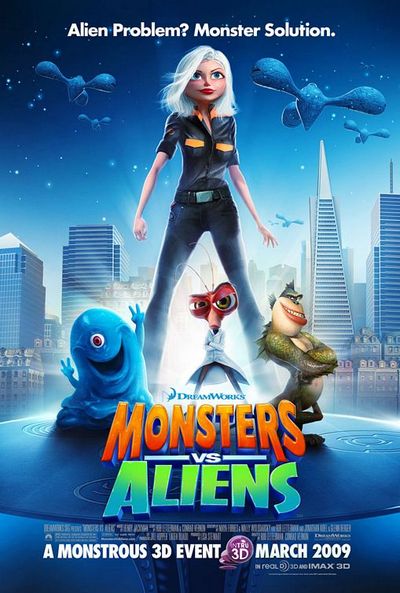 I'm glad to hear that you praised Will Arnett in his performance of this film ("Laurie, ARNETT, and especially Rogen consistently enliven the picture with their mix of askew heroism and general witless behavior"). I feel bad that Steven Colbert and Rainn Wilson failed to perform just as well. Regardless, I'm there.