Dealing with the heavy psychological burden of spousal loss, MIT professor John (Nicolas Cage) watches over his young son Caleb (Chandler Canterbury) carefully, protecting him from life’s social demands. To commemorate the unearthing of an elementary school time capsule buried 50 years earlier, each child is handed a drawing from the tube to study. Caleb is entrusted with a sheet of seemingly random numbers composed by a disturbed girl, triggering John’s curiosity. Figuring the numbers to be a cryptogram that has successfully predicted the world’s worst disasters for five decades, John sets out to prevent the last three codes on the paper from realization. Trying to save lives while seeking out the author’s offspring (Rose Byrne) for answers, John races against the clock to prevent a worldwide disaster from becoming a reality.

While I walked out of “Knowing” semi-disgusted with the film and with Proyas’s shallow bag of tricks, I will readily admit that the feature shares a few wonderful moments of unpolluted suspense. Clearly motivated by Hitchcock’s distinguished timing, Proyas finds amazing inspiration within the picture’s disaster set pieces, in which John’s frantic decoding takes him to the sites of plane crashes and subway collisions -- events he’s attempting to prevent. Proyas, ever the meticulous visual stylist, knows how to the twirl the tension knobs with skillful camerawork and a blaring Herrmannesque score from composer Marco Beltrami to accompany the havoc. The scenes connect, even with a few special effect blunders (John can apparently walk through fire unscathed), because they plug directly into the film’s cracking premise as a chest-tightening disaster film. The ingenious ticking clock here is the code sheet, making “Knowing” a startlingly tight thriller when it boils down to the essentials of John identifying patterns and racing to save the day. Sure, plot holes and drastic leaps of logic swarm the picture, but all that can be forgiven when the film snaps to attention. “Knowing” has a few of those superlative moments.

However, “Knowing” also hungers to be a sci-fi extravaganza, populating the second half of the film with shadowy “whisper people” and reoccurring symbols of otherworldly recognition. To write that “Knowing” lost me with this detour is an understatement; the film positively croaks reaching for a more philosophical conclusion, seemingly embarrassed with the exhilarating coding clockwork that’s come before. Proyas has always fumbled plot mechanics in his previous efforts, and “Knowing” is not immune to the director’s butterfingers. What easily could’ve been a tight, swell 80-minute-long joyride of a motion picture is flooded to 120 cumbersome minutes, force-feeding a frenzied climax that doesn’t fit the tone of movie at all. To spotlight more of the script’s screwy direction would be sprinting into spoiler territory, so I’ll leave it dangle here. Suffice it to say, “Knowing” should’ve left well enough alone. To fatten the experience just to play to Hollywood blockbuster rules dilutes the tension and humiliates the cast.

Proyas attempts to sand down the blunt ends using Beethoven’s mournful Symphony No. 7 and an unrealistically redemptive ending, but it can’t cover the mistakes of the final product, which reaches further into lunacy with a masturbatory staging of a Roland Emmerich-style mass destruction derby to please the nervous executives. “Knowing” is 40% greatness and 60% hot air, which is especially maddening when, for a moment or two at least, the movie was perfect. 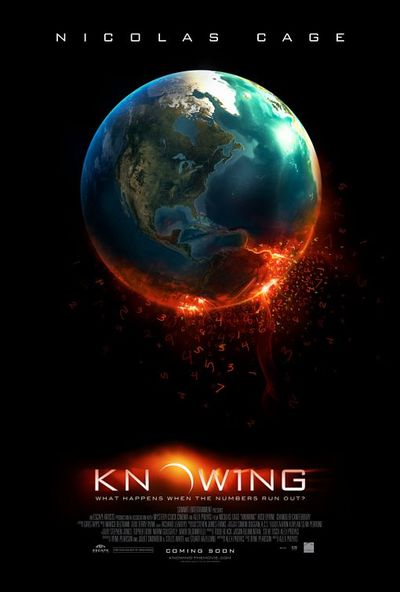