Newly engaged to girlfriend Zooey (Rashida Jones, doing wonders with what little she’s given), Peter (Paul Rudd) has come to the conclusion that he has no close male friends. Pressed by his fiancée and family (including Andy Samberg, J.K. Simmons, and Jane Curtain) to go out into the world and mingle with boys, Peter soon happens upon Sydney (Jason Segel). A beach bum who holds close to tenets of honesty and leisure, Sydney opens Peter’s eyes to the magic of a male best friend, offering the groom-to-be advice on romance, assistance at his workplace, and a forum to rock out to the songs of Rush. As the two grow to be inseparable, Zooey grows concerned, especially when Sydney’s influence has Peter questioning the upcoming nuptials.

“I Love You, Man” is a wonderfully breezy motion picture held back some by Hamburg’s leaden touch. I’m not proclaiming the guy the kiss of death for hipster comedy, but there’s a distinct confinement of imagination in Hamburg’s work that keeps excellence an elusive quality for the director. “Love” is a lighthearted journey of self-awareness, demonstrating how friendship can nourish the soul that yearns for a same sex connection. It’s also a raunchy, free-spirited comedy that can’t help but succumb to the Apatowian touches that are all the rage these days. But those are fantastic touches.

“Love” is brought to life by a wonderful cast of characters and performance speeds mashed together for the most onscreen friction. Since they are practiced scene partners in numerous other films, it should come as little shock to read praise for the tremendous chemistry Rudd and Segel genuinely share. Their ease and indefatigable playfulness carry the picture a remarkable distance, bouncing one-liners off each other with lively funny bone aim and creating a believable lure of companionship, as Sydney’s bluntness and crude “man cave” living design begins to permeate Peter’s straitlaced mentality in ways he never expected. Hamburg is wise to let the two have their fun, for any overt direction would nudge the relationship into a dangerous and quite repellent sitcom arena. In the film, the connection is littered with R-rated expressions of comfort and mutual admiration, with the midsection of the film doing away with any perceptible plot to just enjoy the time with these men and their burgeoning relationship, fused together by the healing touch of hard rock, a sharing of masturbation techniques, and the frustrations that come with being Lou Ferrigno’s real estate agent.

“Love” coasts on the ease of the talent, mixing Rudd’s mastery of social awkwardness with Segel’s Lebowskiesque oneness with the universe. It adds up to an exquisitely carefree, insightful, and often hilarious movie (save for a few needless gross-out gags). Then, about 30 minutes before the film draws to a close, Hamburg decides to introduce screenwriting template roadblocks, slamming the brakes on the enterprise to somehow lure the wandering spirit of the film into a formulaic romantic comedy bear trap. Perhaps the intention was ironic, but Hamberg’s execution is heinous, turning “Love” into a chore and ruining the spontaneity of the production by sniffing out a sleepy break-up-to-make-up conclusion. With characters warmly established and a fluid tone bubbling wonderfully, it’s positively criminal to halt the merriment and uncomfortably accurate summation of male bonding just to play up tedious Hollywood structure. Of course, the abruptness is finely acted, but otherwise completely useless.

If the stench of the final reel can be endured, “I Love You, Man” is a gracious comedy that handles itself well on the subjects of broheem friendships, self-worth, and Lou Ferrigno’s sleeper hold. Any worn-out plot mechanics need not apply. 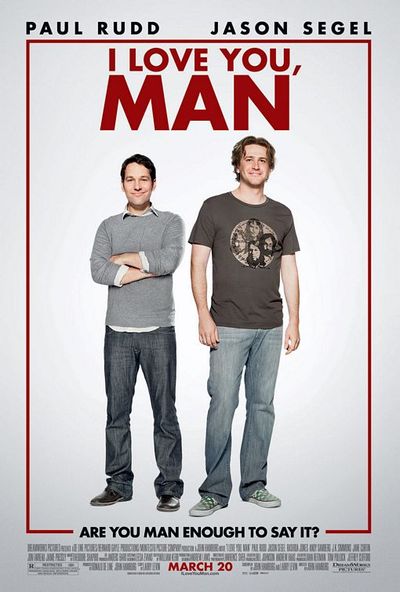