“Hunger” is a purely visceral experience that’s not for the faint of heart. McQueen (a name that I’m sure has invited great confusion for the filmmaker) directs with staggering Kubrickian precision, forgoing a spherical recounting of Sands’s (Played by Michael Fassbender) story to shove the viewer directly into the sadistic prison system, where the inmates are already invested in the “blanket” (refusing inmate attire) and “dirty” protest movements. With brilliantly designed cinematography from Sean Bobbitt, “Hunger” captures the frigid conditions the naked prisoners endured, while also itemizing the nightmarish muck, as the inmates proceeded to cover the walls with their own feces to further compel British officials into action. McQueen doesn’t shy away from anything, even going so far as to turn this hell into visual poetry, focusing on the beautiful naturalistic moments the prisoners happened upon as they wordlessly carried out their orders and smuggling plans.

Indeed, “Hunger” barely contains any dialogue for a majority of its running time, electing to let the stark, unflinching images speak miles about the madness at hand. The contrast of procedural English police maneuvers with the feral panic of the Republican prisoners is riveting to witness, colored fascinatingly by McQueen’s unspoken moments of reflection as both sides process the daily blasts of violence.

The centerpiece of “Hunger” is perhaps its weakest idea. In a single camera shot that runs an unbelievable 17 minutes, McQueen brings together Sands and a priest, brought in to help talk the prisoner out of his intention to restart a hunger strike. The conversation is compassionate and direct, discussing matters of intention and inspiration that lend insight into Sands’s determination. However, it’s a static shot, and no amount of bravura filmmaking purpose can alter the fact that once the urgency is pulled out of the equation, “Hunger” misses the electricity. It’s an impressive scene and a technical conquest, but the eye of the hurricane approach stalls the determination of this otherwise direct and astonishingly crafted political moan. 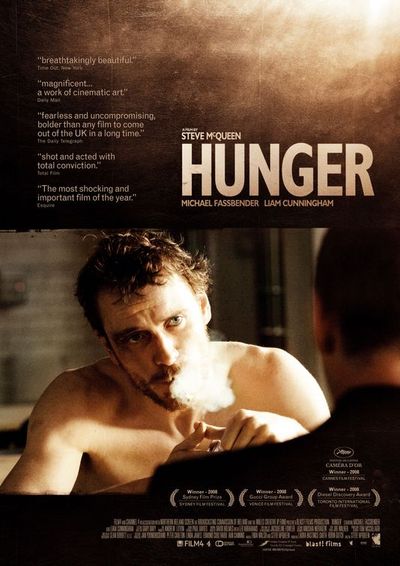 I agree with your review. What I do not understand concerns the scenes of the fast, where Bobby Sands was in a clean bed, with clean sheets, in a room with a window, with at least some baths, and a kindly caregiver. It was almost a relief to be dying, vs the brutality of prison life. It doesn't seem that the brutalizing prison environment would have let Bobby die in that much comfort. Seems to me they would have let him starve in the abysmal prison cell. I think the film makers were basically trying to be historically correct, so was this - reality?