Celebrated director Doris Dorrie’s “Cherry Blossoms” concerns the enriching odyssey of life lived after the cruel death of a loved one, tracing that specific psychological abyss for a German man at ease with his habitual life and now confronted with cataclysmic change. Endearing, modestly tear-jerking, and basted with just enough culture shock oddity to keep the cinematic brew tart and curious, “Blossoms” is an emotionally charged pearl of a film.

Upon learning her husband Rudi (Elmar Wepper) has a terminal illness, devoted wife Trudi (Hannelore Elsner) elects to keep the death sentence from him, instead she pushes the couple to leave their rural home in Bavaria to visit estranged family in Berlin. In a cruel twist of fate, Trudi dies on the trip, leaving Rudi a mess, yet receptive to carrying out his wife’s dream to visit Japan and learn more about her obsession with Butoh dancing. Once in Tokyo to see the youngest of his alienated children, Rudi is overwhelmed with the fast-paced culture of the big city, finding comfort in Yu (Aya Irizuki), a street performer working out her own issues of grief through the artistry of Butoh.

Dorrie (“Men”) really had all the invitation a filmmaker needs to turn “Cherry Blossoms” into a sudsy, invasive Lifetime movie of the week. The ingredients are all accounted for: unexpected death, dysfunctional family spread across the globe, and a fish out of water scenario. However, Dorrie urges the material to symbolize more than simple histrionics; she’s after the seeds of mourning and the profound weight of regret. “Blossoms” forgoes any real plotting to float gently on the beauty of response, with the filmmaker allowing the actors to guide the feature with their understated emotional instincts, working their way into characters forced to express their desires and apologies after decades of uniform schedules and corked communication are erased by a single startling death.

The principal relationship between Rudi and Trudi is where Dorrie obtains outstanding behavioral nuances. Played with truly triumphant elegance and poignant detail by Wepper and Elsner, the couple’s movement from stagnant living to ill-fitting travel invites a host of foibles for Dorrie to focus on, soon soured once the couple finds their children have little room left in their hearts for their old-world parents who embrace order, traditional German food, and tightly choreographed domestic creature comforts. The first half of the film is devoted to the crush of parental lament and candid familial perspective, as Trudi senses mistakes made with her adult kids and confronts the lost dreams of her youth. It’s just heart-wrenching stuff.

Once Rudi travels to Tokyo, “Blossoms” becomes more about catharsis heaped upon an unprepared man. Eager to celebrate the memory of his adored wife, Rudi searches blindly for gardens of Cherry Blossom trees, Butoh dancers, and ultimately the bashful summit of Mount Fuji to locate an opening to Trudi’s heavenly spirit. Dorrie doesn’t glaze on the sentiment here, instead detailing Rudi’s worrying confusion as he stumbles around wearing his wife’s clothes over his own (an act more loving than it reads) or mistakenly seeking distraction in Tokyo’s red light district. It’s a beautiful depiction of loss lacking a conduit for proper extraction, and it allows the film the opportunity to find amazingly vulnerable spaces to explore within Rudi.

“Blossoms” also digs into the sights and smells of the cities visited, with the agile Tokyo sequences vibrating from a stunning immediacy as Rudi learns of strange customs and communication. The camera is not shy to soak up the minutiae, and the film benefits immensely from this attention to detail and semi-deification of Eastern rituals, most directly the Butoh dance and its spiritual place in Trudi’s life.

With exquisite performances, engaging camerawork, and a compassionate story that cuts directly to bone, “Cherry Blossoms” is a riveting, perceptive feature film, and one that’s ready to display emotions at their most feral and startling. It’s an incredible motion picture. 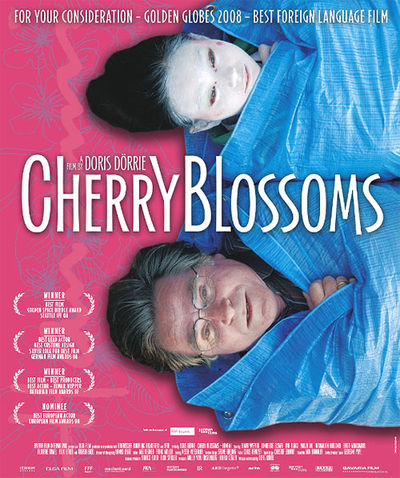