After losing his fiancée to an abrupt break-up, Leonard (Joaquin Phoenix) is lost in a cycle of depression, living at home with his concerned parents (Isabella Rossellini, Moni Moshonov) who worry about his suicidal thoughts. Set up with Sandra (Vinessa Shaw), a business partner’s daughter, Leonard finds a woman interested in his hobbies and attracted to his flaws. Living in the same apartment building is Michelle (Gwyneth Paltrow), a party girl with a married boyfriend who looks to Leonard as a friend, much to his dismay. Trying to balance out a relationship that’s his for the taking versus his unreturned love for Michelle, Leonard begins behaving irrationally while sorting out his feelings, risking the alienation of both women the longer he plays the two sides.

“Two Lovers” is the fourth New York adventure from writer/director James Gray, a patient filmmaker who always takes the longest route possible with primary color concepts. Gray’s plots are insignificant to him, holding more interest in the nuances of human reaction and emotional burden. While not sharing the seedy criminal underbelly tones of “Little Odessa,” “The Yards,” and “We Own the Night,” “Two Lovers” is just as fixated on the little instances of enlightenment and response that expose fascinating motivations. Gray is a skilled craftsman of these withdrawn stories, and “Two Lovers,” while easily his most modest production to date, is incredibly successful illuminating the single-minded drive of whispered male lust.

Using distinctive, antiquated New York corners (lovingly shot by cinematographer Joaquin Baca-Asay) to backdrop Leonard’s dreary existence, “Two Lovers” has the benefit of a lived-in look, which goes a long way to buffering Phoenix’s daffy performance. While justifiably wounded from a few heartbreaking turns of life, Leonard is portrayed as a dim-witted soul, quick to trust and hopeful to discard old memories with this unexpected streak of romantic entanglements. After a good 20 minutes of bonding time, Phoenix’s rumpled, unshowered appearance begins to make sense in the overall design of the picture, especially as Gray focuses on the unspoken desires of the character, who takes on Sandra out of obligation while chasing Michelle through a minefield of disappointments and deceptions. Work from Paltrow and Shaw is agreeably tempting, but Phoenix is the gullible focal point of the film Gray extracts the most dramatic shades from.

After a sparkling first hour Gray bundles with riveting relationship baby steps and Leonard/Michelle humiliations, “Two Lovers” takes some melodramatic turns as the second half arrives, sending Michelle through the trial of a medical emergency to push Leonard into action. The subplot feels too contrived to be of any use to the already well-oiled script, and the detour disconcertingly slows down an already glacial film.

Gray redeems himself with a vividly executed finale, putting Leonard to the test as he reaches critical mass with Michelle and Sandra. It’s a routine predicament, but the tragic squeeze is outstanding, especially with Phoenix selling Leonard’s distress to a point of possible internal bleeding. “Two Lovers” is a rocky cinematic road, but digs into the senses quite effectively, offering a detailed ride of heartbreak that will undoubtedly trigger some faint discomfort in any viewer who might identify with Leonard’s ache. 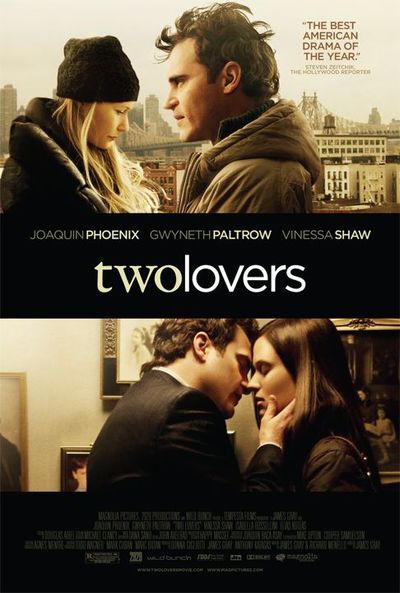