With his father off to conduct business in New York, young Toby (Matthew Harbour) is left in the care of his stuffy grandmother, Ellen (Una Kay), who long ago lost her patience with children. Forced to entertain himself within the icy, forbidding estate, Toby comes across Rabbit (voiced by Chandler Wakefield), a stuffed toy who comes alive in Toby’s imagination. Drawn into a dream world of frolic and friendship, Toby meets other playthings such as Horse (Tom Skerritt) and Swan (Ellen Burstyn), who all hope to be transformed into real animals by the power of love. While this newfound joy slowly thaws the ice between Toby and Ellen, the boy’s battle with scarlet fever soon threatens the safety of the toys, who urge the boy to reach out to his estranged father for emotional support.

A mix of live-action photography and various animation touches in both CG and 2-D form, “The Velveteen Rabbit” has been reimagined by director Michael Landon Jr. as an uplifting tale of a broken family slowly succumbing to the power of affection. It’s an obvious dollop of sentiment and modern technology, but Landon Jr. massages the illustrious material into a new shape with surprising effectiveness, paying kindly homage to the source material while sprinting off in fresh directions that take advantage of the visual medium.

“Rabbit” is a low-budget production, but not an unsightly one, as Landon Jr. creates a genial, plausible world for Toby to grow fiercely attached to his toys, while maintaining a crisp, distanced early 20th century look with minimal production trickery. Nicely alternating between Toby’s reality and the playground of his mind, “Rabbit” strikes a polite balance between cartoon antics and compassion, played especially well in scenes where Toby and Ellen begin to bond and open up emotionally to each other. The acting assists the transitions wonderfully, with young Harbour finding the ideal notes of separation anxiety and wonderment to play, while Kay weaves pleasingly throughout the picture, bending from a frosty senior citizen to a wide-eyed grandmother with an unexpected cache of endearment. Reliable vocal work from stars Skerritt and Burstyn help to buy into the animated flights of fancy as well.

Perhaps “Rabbit” strays too far from the original book’s soft intentions by hammering home a forceful tear-jerking final reel. It’s not a subtle picture, but “The Velveteen Rabbit” has a full, gushing heart it wants to share with the audience, and released in the wake of a thousand obnoxious fart-happy distractions, its inherent gentleness and ability to remain inspired by kindness is wholeheartedly welcome. 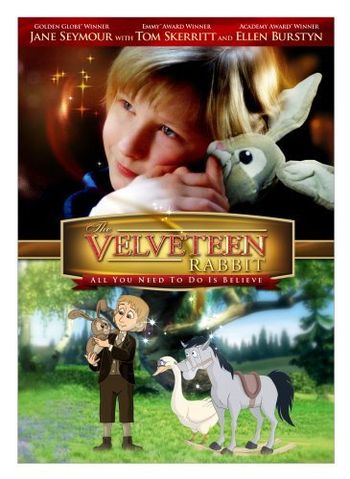 I liked the live-action parts of this movie but found myself fast forwarding the animated bits. I disliked that the story strayed so far from the book, but still found it interesting, although I also found myself wishing they had used this same cast for a movie truer to the book. I think that Matthew Harbour was convincing. The grandmother seemed to warm up to him too quickly. I agree with your B grade.