When a master thief known only as The Tornado manages to steal priceless artifacts from around Europe and Japan, it brings together a “Dream Team” of worldwide detectives (Andy Garcia, Alfred Molina, Yuki Matsuzaki, and Aishwarya Rai Bachchan) to investigate the crime. Representing France is Inspector Clouseau (Steve Martin), the bumbling protector of the Pink Panther diamond, who decides to take charge of the group to protect his pride and secret romantic inclinations toward secretary Nicole (Emily Mortimer). Hot on the trail of The Tornado, the group chases clues around the globe, piecing together a suspect while Clouseau proceeds to destroy everything in his path with his unrelenting, yet surprisingly effective ineptitude.

With the Peter Sellers/Blake Edwards comparisons out of the way, Martin’s take on the “Pink Panther” franchise has a little more breathing room to work with for the sequel. Granted, it shouldn’t be a complete shock to find the actor (who takes a co-scripting credit) forgoing a chance to challenge himself with a wittier continuation, and I must admit that on the grand scale of multiplex torment, “Panther 2” is actually a slightly superior film than its forefather. It’s just depressing to find the picture unwilling to deviate from the broad comedy spectrum, preferring the warm comfort of mediocrity and halfhearted response over a steamrolling comedic contraption that would genuinely surprise.

“Panther 2” features a stronger caper structure and an agreeable assortment of diverse co-stars (Lily Tomlin, Jean Reno, and Jeremy Irons also make brief appearances), but the direction from Harald Zwart is unenthusiastic at best, a trait not surprising from the man who gave the world “One Night at McCool’s” and “Agent Cody Banks.” These new “Panther” films are really just 90-minute excuses for Martin to roll around in the silly, yet Zwart can’t even make that basic element come alive. Teeming with elaborate pranks and pratfall invitations for Martin and the cast, “Panther 2” is a familiar exercise in stupidity, graciously performed for sure, but nevertheless unremarkable. Zwart robotically runs through the motions, bending Clouseau’s naiveté to expectation as the character runs around making a nuisance of himself.

Some oddity is allowed to seep into the screenplay, with “Panther 2” continuing the original film’s infatuation with PG-careful sexual innuendo, at one point turning to Tomlin to provide some lustful focal points. Tomlin over Mortimer and the stunning Bachchan? Sure. Things grow stranger when Clouseau’s inadvertent racism is revealed, referring to a Japanese colleague his “little yellow friend” (a weird callback to the Sellers years). Of course, it’s all performed robustly by Martin, but this edgy comedic spirit is lost in the middle of the blunt stupidity, fighting to breathe within the overall cartoon nature of the feature.

I did chuckle a few times during “Pink Panther 2” simply because Steve Martin is a game performer and the screenplay, as forgettable as it is, manages to sneak in a few unexpected comedic blows. It’s a shame the rest of the production doesn’t follow suit. By playing it safe, the “Panther” franchise has added a second lackluster chapter in a series nobody actually asked for. 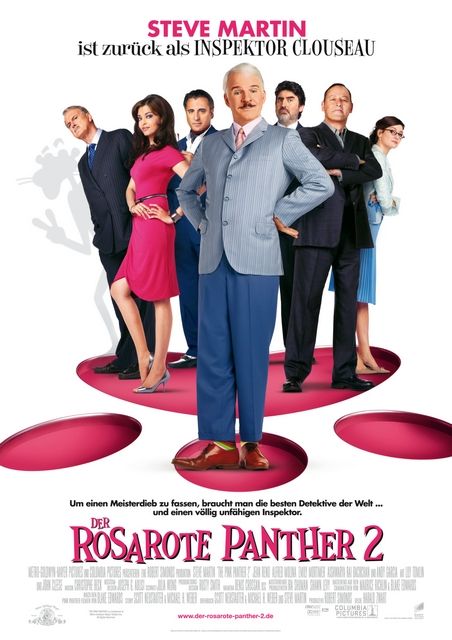 actually im writing this after 15 minutes done watching this movie.. 1st day screen in my place 2day.. damn.. i can even breath for a sec.. juz laugh and laugh and laugh.. now i got a bad cough d.. but i worth it.. seriously.. plz make another pink panther fast..
cant wait da pink panther 3..

PeDoT must be a small child. Anyway, i saw this film and though it was ridiculuous. I thought the script was weak and hgalf of the actors did no acting. They just stood around and pouted. It wasn't funny at all. The few other people in the cinema were not laughing either. It's a crime what Martin is doing...

i agree with pedot.i wonder why that annie think that wasn`t funny enuf for him, i really wanna noe what muvie actually can make he laugh. and that movie shud make me die laughing. hehe... but nevermind.. all people are different..

It's nowhere NEAR as good as the original, the problem isn't Steve Martin - he's fine. The problem is the script

You would have to pay me to see this film. It should be called Pink Panther Suck it part 2 My Name Is Steve Martin And I want Your Money. If you like this film please go into your bathroom and hang yourself from the shower arm. Dumb people should not have kids and your one of them.