Louis Salinger (Clive Owen) is an obsessed Interpol agent looking to expose the corrupt practices of the influential International Bank of Business and Credit. Working with New York District Attorney Eleanor Whitman (Naomi Watts), Louis travels around the globe trying to piece together enough evidence to bring the bank to its knees. Facing a powerful organization with little reluctance to snuff out those who stand in its way, Louis and Eleanor find they must act quickly before a massive arms deal is sealed. Chasing tips and clues, the duo inch closer to an arrest, only to find the bank more powerful and insidious than they could have ever imagined.

“The International” is an arresting production from director Tom Tykwer, last seen pulling off a cinematic miracle by making the power of scent a compelling plot for a movie (“Perfume”). Playing to the filmmaker’s strengths as an icy tactician, the film has all the dramatic ammo it needs to soar as masterpiece of screen paranoia, somewhere along the vein of “Three Days of the Condor.” “International” is a solid film, it just never reaches beyond a curious distance written into the DNA of the screenplay, forcing Tykwer to pick between a succession of sequences where various men with various accents discuss financial control of the world, or the guns-blazing variety of thrills that typically generate a shameful, yet quite popular response. The indecision kills the film.

The banking angle is topical and an appropriate nemesis for Tykwer to manipulate with his exhaustively designed editing rhythms and production design triumphs. Unfortunately, cold stares and laptop interaction fail to summon a swift feeling of motion to “International,” with much of the film stuck in the expositional mud, trying to sell intricate socioeconomic ideas in place of more traditional mustache twirling. The film lacks needed momentum to successfully push the banking material to the proper level of frazzled audience involvement. Well-played fury from Owen helps to a certain degree, and the feature seems eager to rile up the viewer with vague deceptions and double-crosses; there’s just no gas in the tank.

A mid-movie shootout inside the Guggenheim Museum, where Louis and some cops confront a gifted IBBC assassin, is a corker of a sequence that Tykwer mines to glass-shattering perfection, yet exposes the patchy vision ultimately laid out for the film. Trashing the Guggenheim in a swirling, operatic fashion that will surely spin Matthew Barney into a jealous rage, Tykwer finally lets loose, presenting an orgasmic spurt of carnage that’s both earned and needed. The set-piece is pretty amazing and the film could’ve used at least a few more like it to grasp the material tighter. Having Louis and Eleanor vocalize their contempt and suspicion can only take the movie so far. Sometimes you need to dress up a hallowed institution or two with bullets to make a lasting impression.

With Louis taking an eternity to arrive at a pre-determined destination of revenge, “The International” just itches to bring the pain, but Tykwer never indulges the temptation. He’s made a handsome thriller, just not a riveting one, turning the potential for an unsettling thrill ride with real-world ramifications into a passable nail-biter more interested in the art of protracted conversation than portioning out punches. 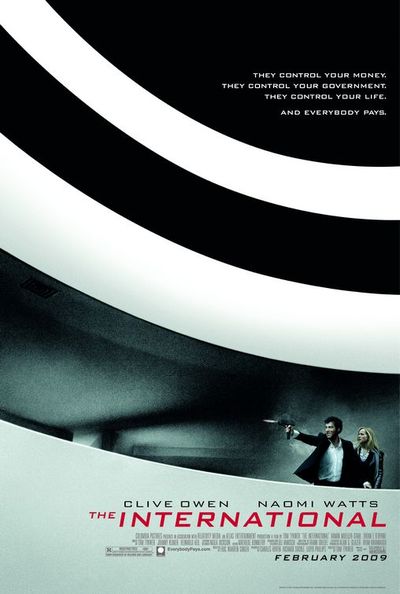