Max Peterson (Shane West) is a computer security analyst who receives a revolutionary cell phone as a gift from an anonymous donor while working in Bangkok. The phone magically texts Max with winning tips on gambling and other life-altering suggestions, leading the tech nerd to rack up major bucks, drawing the attention of a casino security officer (Edward Burns), a FBI agent (Ving Rhames), and a questionably flirtatious woman (Tamara Feldman). However, the celebratory bliss is short lived when the phone’s history reveals a body count, with Max next on the list. Taking the cause all the way to a top U.S. security director (Martin Sheen), Max and his pursuers travel all over the globe to figure out where the phone originated from and how the system behind it can be stopped.

“Echelon Conspiracy” is a trivial DTV thriller that’s making a pit stop on the big screen for reasons completely unknown. I imagine the feature is much easier to relish at home, with less room offered to observe director Greg Marcks’s total discomfort with complex action sequences and his hesitant guidance of performances. On the big screen, the wobbly condition of the filmmaking is revealed repeatedly, generating a fairly goofy suspense piece that isn’t nearly as self-aware as it should’ve been. It’s an earnest technological thrill ride without the needed elegance to pull itself through, and while the movie benefits from comparison to the rotten “Eagle Eye,” it frustratingly refuses to challenge the genre to persuasive results.

Marcks does launch “Echelon” amusingly, building a riveting air of discovery as Max learns the curious possibilities of the phone. The casino scenes are particularly winning, playing up the universal taboo thrill of the cheat. From there, the film gets lost attempting to compete with better funded actioners, pushing limited performers such as West and Burns painfully past their skill level while using hilariously implausible explosions to keep the audience awake. Marcks is clearly beyond his pay grade with this material, and while his directorial panic is occasionally entertaining to watch, it fails to sustain an entire movie.

Discussing themes of national security and Patriot Act consequences, “The Echelon Conspiracy” feels more dated than it actually is, laying on the Bush’s America foghorn a bit too loudly for such a simplistic, near sci-fi premise. If Marcks wants to shoot up buildings, offer Shane West dramatic scenes to slaughter, and blow up trucks, that’s perfectly fine. However, the mixture of harebrained Steven Seagal filmmaking trappings and weary political commentary makes for a dull movie with a mystifying message. Save this one for a 3am Spike TV airing and the shenanigans will be easy to digest. Spending a full ticket price for the film might result in an excruciating case of moviegoing remorse. 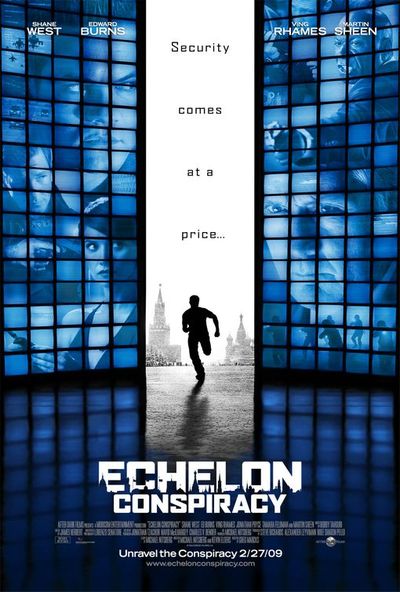 Wish I'd read this review before I bought the tickets. This movie was a complete waste of time and money. It's amazing that something this bad makes it into theaters.

The movie was very unimpressive to say the least. D+

Please note to all knockers:
- Eagle Eye Filming Dates: November 2007 - March 2008
- Echelon Conspiracy Filming Dates: August 2007 - October 2007
Was it really that hard to look this information up before some of you stuck your foot in your mouths?

thanks for the last posting.
c`mon it wasnt that bad !
found it quite entertaining
and no i am not thoroughly stulified!