A criminal mastermind of the highest order, Bison (Neal McDonough) rules the streets of Bangkok with his right hand man Balrog (Michael Clarke Duncan), along with assassin Vega (Taboo) and corporate vixen Cantana (Josie Ho). With Bison’s vicious Shadaloo syndicate placing the city into a state of panic, it’s up to a highly trained warrior, Chun-Li (Kristin Kreuk, trying for earnestness and failing), and her unwavering dedication to justice to infiltrate Bison’s underworld and battle to save the city. On Chun-Li’s trail is Interpol agent Charlie Nash (Chris Klein), a man equally driven to stop Bison, rising above the law to join the lady brawler as she sets out to squash evil.

The pie crust of the “Legend” failure was shaped early on by the producers when they hired Andrzej Bartkowiak to direct this fresh attempt to merge the video game world with big screen heroics. Here’s a list of the director’s achievements: “Doom,” “Exit Wounds,” “Romeo Must Die,” and “Cradle 2 the Grave.” Not the most inspiring of filmographies. Certainly the new, hardened tone for “Street Fighter” requires a visionary who once helmed three DMX motion pictures, but his limitations as a storyteller and architect of foot-first action once again crumbles a promising feature film. However, Bartkowiak’s numerous directorial blunders are only but a toe dipped into the pool of “Legend” futility.

With only a few characters and elements adapted from the video game series that began its reign of quarter munching over 20 years ago, the new “Street Fighter” picture is a distinct departure from the 1994 event movie failure, removing an overall cartoon atmosphere for a grittier tone concentrating on straightforward revenge scenarios, Eastern mysticism, and adding a dab of verisimilitude to once colorful characters. The screenplay by Justin Marks is surprisingly straight-faced, aggressively attempting to assign new mythos to these famous characters that will generate a sprawling fight saga to be feasted upon over several sequels and assorted gaming tie-ins. The ambition is brave, but the execution is the pits, turning the beloved “Street Fighter” legacy into a cruddy, smalltime Sci-Fi Original production, perhaps too serious for its own good.

While I do use the word “serious,” “Legend” is far from Masterpiece Theater. At its core, the picture is still a crude martial arts demonstration reel, only Bartkowiak fumbles the heated encounters with ripsaw editing and clumsy choreography that exposes the actors counting off the moves in their head. It’s impossible to kick back and embrace the violence when it’s all made a blur, occasionally punctuated by a famous “Street Fighter” finishing move or special effect. The action is largely routine, PG-13 filler, but so is the entire movie, lamely lurching from conflict to conflict in a programmed manner. At this point, I’m positive Bartkowiak wouldn’t know nail-biting tension even if it came up and bit him on the nose.

The only joy of “Legend” is watching the actors struggle to rise above the mundane details, only to spectacularly fail without assistance from behind the camera. Chris Klein takes the cake here, assuming a strange mix of Clint Eastwood and metrosexual pedophile as he swaggers around the locations trying his damndest to come across as a tough guy. It’s hilarious to observe his cheese, especially in the presence of the other actors, who I swear are holding back giggles. Neal McDonough also deserves a fair share of raspberries for his acting, slipping on a goofy Irish accent to play pure Bangkok evil. Of course, why an Irish baby orphaned as an infant in Bangkok would retain a thick brogue in his adulthood is not explained, but very little of the film is, preferring the catchall Eastern locations to play ball any way it likes.

“Street Fighter: The Legend of Chun-Li” is more numbing than awful (though a lesbian dance-off sequence with Chun-Li and Cantana pushes the needle into the red), and with a lack of gaming tributes and spectacular brawling, it’s difficult to understand why the feature was even made in the first place. The end promises a sequel that appears to right several wrongs, but after this installment, I doubt enough audience members will be eager to endure another round with this mishandled franchise. I’ll take Jean-Claude Van Damme and his powder blue beret any day over this insipid, clunky, and joyless motion picture. 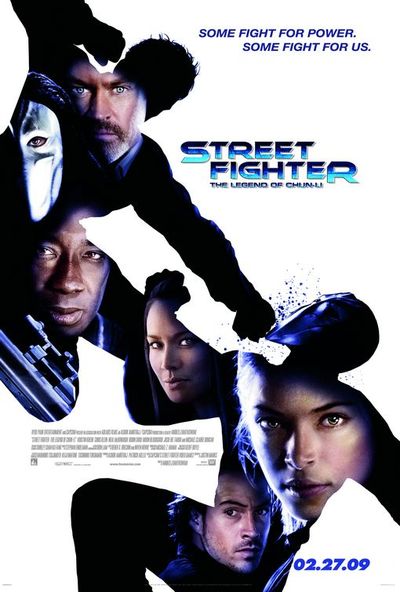 Man was it that bad ?? I thought they couldnt do worse than the VAN DAMME movie

oh man, its so bad, why are they ruining such a great franchise by making such movies..m counting on the next animated movie that's coming with street fighter 4 game..its feature length, and from the promos n teasers, it looks like, its going to be the best street fighter movie. but still, the past 3 animated movies, are still awesome.

with such a strong opening for the street fighter iv, the series shouldn't have to be humiliated so badly with this movie. i've seen little to no promoting of this movie. fox knows how bad this is.

You could see this coming a mile away. Once they got Kristen Kreuk as Chun li...come on...immediately knew it was going to be bad. Also the movie website hasnt been updated since last year. No money to work with? Same goes for the GIJOE movie coming out soon. Not one good actor aside from Quaid..Shame that production companies waste money on really bad scripts.

You knew the movie was doomed when they originally wanted to have a White girl (only famous name was Jessica Biel) play the part. Burn Hollywood Burn.

I'm holding my breath for "GI Joe", however. Paramount is a reliable company ("Iron Man", people!).

The only way Street Fighter will be successful as an Action Film, would be this:

A movie about people emulating the game, and find out that this guy took it seriously, and was successful in fulfilling the role as Bison.

All the wannabe's know martial arts to an extent, and are willing to take real bruisings. They know about Bison, because he called up on the "Street Fighters" and challenged them to fight. Turns out, that Bison poser actually made a deal with the devil, and has dark powers.

After kidnapping them, he forces them to fight each other in mockery of their efforts, or they will be mamed. One of the wannabe's gains Bison's trust after nearly killing one of the other wannabe's. He secretly sets the others free, and they all look for Bison, to put an end to his psychotic behavior for good. During the brawl between the Bison and the other posers, some amazing things happen. They rise to the occasion, and pull of incredibly lucky executions of trademark moves. However, they are all ineffective, and do not strike Bison. He laughs, says this is the most fun he's had in years. He grabs the Chunli poser, and threatens to kill her, simply because he likes touching such firm buns. Chunli then breaks free and kicks his ass. Despite this, he is still undefeated, and uses his dark powers to seriously harm many of the street fighters. One "street fighters" who didn't model himself after any fictional character, decides to get all religious and prays openly to God for the privilege and power to subdue Bison. He charges, does some really fancy evasion, and ends up knocking Bison out with a Tornado Kick. They tie Bison up, and then take him to the police. In the end, there is awesome comradery and they all end up training together. Then they all find out weeks later that Bison had escaped, thus setting up for a series of more serious and in depth about the characters, their real origins, and bigger story line and character interactions. Like Ryu poser dating Chunli poser. She actually has really nice thighs. :)

sequel would be this: Bison actually rebuilds his criminal syndicate, and takes over many other criminal groups via assassination and usurping power. He gets enough money, and is building a facility(out of his insanity) to perform Cloning. Out of all of this, The American Government decides that they don't have the money to waste on another psychopath, because of Obama's Stimulus plan and the Wars already being funded.

"Now 15 years later, a new challenger has arrived with “Street Fighter: The Legend of Chun-Li,” and this production is armed with a few clumsy television actors, Chris Klein, and a member of the Black Eyed Peas. This is not progress."

That made me laugh. But, seriously Brian fill me in on some of the plot details no matter how bad. I know this one is an action flick, yet I am sure they throw in the cheesy attempt at a romance tale...
-Michael R. Allen

Chris Klein's horrible scenes were up on YouTube once, but Fox took it down. Bastards!