When Nazi medical experiments spiraled out of control, a race of superhumans were born, presented with a wide array of powers that survived for generations. Living in Hong Kong, “Mover” Nick (Chris Evans) is struggling to control his telekinetic abilities. When Cassie (Dakota Fanning), a teen “Watcher,” arrives at his door with word of a crucial briefcase about to fall into the wrong hands, it triggers the wrath of The Division, a secret government organization led by “Pusher” Henry (Djimon Hounsou), who needs the case to complete their ultimate weapon: Kira (Camilla Belle), a Pusher with exceptional powers. Facing the wrath of an Asian crime family made up of thugs with various powers, Cassie and Nick try to formulate a complex plan to thwart Henry and keep the contents of the briefcase safe.

Pushers, Watchers, Movers, Bleeders, Stitchers, Shifters, Wipers, and my favorite, the wacky Sniffers (they furiously smell objects to learn their history); “Push” shoves the viewer into screenwriter David Bourla’s murky universe of powerful freaks, much like a typical labyrinthine superhero mythology, only without the necessary groundwork to make it all mean something to the causal viewer. “Push” is ambitious yet completely useless, doggedly trying to summon an epic tale of mental warfare by gathering a dense narrative teeming with unfamiliar terms, unexplained powers, and undefined allegiances. Confusion is the picture’s ultimate weapon, and it wields it very well.

Perhaps “Push” is as coherent as a comic book once placed under the microscope, but director Paul McGuigan doesn’t invite the closer inspection needed to best appreciate the tortoise-paced antics. Using flimsy handheld camerawork and goofy fish-eye lenses, not to mention bathing the film in an aggressive $7.99 buffet neon lighting scheme (Hong Kong deserves a better representation than this film offers), McGuigan makes “Push” amateurish and trivial, when clearly he’s lusting for something intricate and unpredictable. Unfortunately, “Push” spends too much time explaining itself to actually reach any sort of pulse, with long, dry gaps between magician-cheeseball combat sequences to dig itself further into absurdity.

The cast isn’t of much use to “Push,” with the lion’s share of the drama handed to the undesirable thespian triangle of Evans, Fanning, and Belle. Unable to transform the clunky screenplay into a special sci-fi cadence, the cast appears paralyzed, unable to deduce how to play Bourla’s extravagant displays of nothing. To them, it’s more about playing dress-up and surviving strange plot turns (Nick and Kira, on the run from certain doom, and they have time for sex?) over organically conveying the halfhearted “Push” world. Further injury is inflicted by Hounsou, who should never be cast in a role that requires heavy exposition. The African actor is a fine screen presence, but not an ideal monologist.

“Push” boils down to a basic level of interest. Nick, Cassie, and Kira are evading death’s door at every turn, yet without a welcome mat laid out for this sludgy stew of sci-fi make-em-ups, who cares? McGuigan tries to grab the audience with flashy visuals (the violent climax is a hilarious brawler, incorrectly butched up with blasts of rainbow smoke), but the effort is useless without something substantial to hang the eye candy on. “Push” is an empty calorie extravaganza and demands a crooked concentration it doesn’t earn to sufficiently piece this mess together. 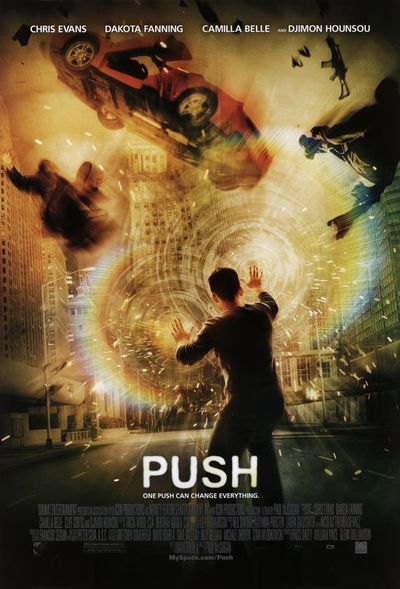 I had this strange feeling you'd bring up your love of "Jumper" even before I clicked on the link for your review. I'm sorry, but that movie had so many problems. Bland characters (it takes something special to make Samuel L. Jackson boring and laughable), almost zero background story that made no sense, and while the action scenes were decent, I didn't care what happened to anyone in that movie. And talk about a strange appearance for Diane Lane, what a waste. The only good thing about the movie was Jamie Bell's performance. I gave Jumper another chance on cable, and fast forwarded though all the uninteresting stuff, and it makes for an interesting 20 minutes max.

David goes from him being a kid, to being grown up, then getting caught, so he goes home for a Roman holiday with a girl he hasn't seen in years? That made sense to you? You had a problem with Nick and Kira having sex in "Push," a former couple, but not with childhood friends David and Millie hooking up almost instantly when they get to Rome?

"Push" is what "Jumper" wish it had been. It's not great, and I agree that at times it did seem to drag a little, and maybe a couple of more action scenes, but it is more intriguing, more complicated, and at times a very clever film, more than the ultra-basic "Jumper" ever was. It is pretty familiar territory if you watch a show like "Heroes," but I think the film does a good job at showing a more bleak world and inventive way of showing powers. Some of the characters could've been better developed, but that's typical when there's a film with such a large cast of characters. Chris Evans always gives a solid effort, and Dakota Fanning continues to prove she's a capable young actress. I was less impressed with Camilla Belle, but I didn't think her character was written particularly well. Overall it worked well, a recommend anyone who thought the trailer made it look interesting.