In the Baltimore area, life is tough for those invested in the game of love. For Gigi (Ginnifer Goodwin), Conor (Kevin Connolly), Anna (Scarlett Johansson), Ben (Bradley Cooper), Alex (Justin Long), Neil (Ben Affleck), Beth (Jennifer Aniston), Janine (Jennifer Connelly), and Mary (Drew Barrymore, in a brief cameo), trying to find true love has been a grueling task, made downright impossible once the intricacies of dating protocol take over. While some are searching for marriage, others just want a little flirtatious sanity in their lives, and it all boils down to the primary rules of attraction and how complicated courtship can truly be.

Adapted from the comedic self-improvement workbook written by Liz Tuccillo and Greg Behrendt, the screenplay for “Into You” labors to condense a glorified advice column into a feature film; it takes the tenets of relationship behavior set forth by the authors and crams them into a narrative that can’t handle the weight. The concept has been spread out to a cabal of characters who all share a common trait: they’re not pleasant people.

Leaving “Into You” in the hands of director Ken Kwapis was the production’s first mistake. A master chef of submissive comedic pabulum (“License to Wed,” “The Beautician and the Beast”), Kwapis takes this tangled web and barely makes any sense out of it. Something of a dramedy coated in complicated neuroses, Kwapis aims for a sitcom delivery, refusing to investigate these characters any further than frail heartbroken clichés. “Into You” was never meant to be a Bergmanesque study of the human heart, but there’s a wide open field of dramatic opportunity to seize in the screenplay, passed over to play tiresome footsie with pandering clichés more at home in a daytime soap.

If there’s any focus to be found in the picture, it’s provided by Gigi, who embodies the manic single woman stereotype that fuels the story. Her obsession arc sums up “Into You” as a “Sex and the City” campaign to unite female viewers by breaking down gender politics into Crayola colors. The simpleton attitude bleeds into Conor’s attempts to dewussify himself to catch temptress Anna, Ben’s thoughtless infidelity blues with frigid wife Janine, and Beth’s biological clock urge to marry a reluctant Neil. Kwapis does a fine job setting the cat’s cradle of plotlines that have the characters constantly popping up in the film, but only a rare scene attempts to paint an honest portrayal of relationship indecision. Everything else is glossed over, boxed uncomfortably into bite-sized punchlines that do incredible damage to any sympathy the script is trying to whip up. If these characters are feeling any woe by the end credits, they deserve every last drop.

Dodging Kwapis’s leaden touch are the actors, who manage to snag a few moments of heartfelt sentiment before the filmmaker catches on. I especially adored Connelly, who shows off a rich comedic and domestic paranoia range she hasn’t allowed herself to reveal in years, giving Janine a sharp edge of grief as she watches her marriage crumble. Affleck and Aniston also share a few humane scenes, although they have the benefit of being the only two responsible adult characters in a sea of floundering youth. The actors share real chemistry and frankly I would’ve preferred a Beth and Neil movie over the 130-minute-long grab bag of uncertainty and blasphemous “Some Kind of Wonderful” references ultimately offered.

Jumping back and forth, anxious to convey a twisted sense of rules and outcomes to the dating game, “He’s Just Not That Into You” never reaches an insightful plateau. Instead, the film is a gelatinous mess of tones and characters aching to solidify, only to find the chilly reality of dating and marriage perhaps too isolating to candidly confront. 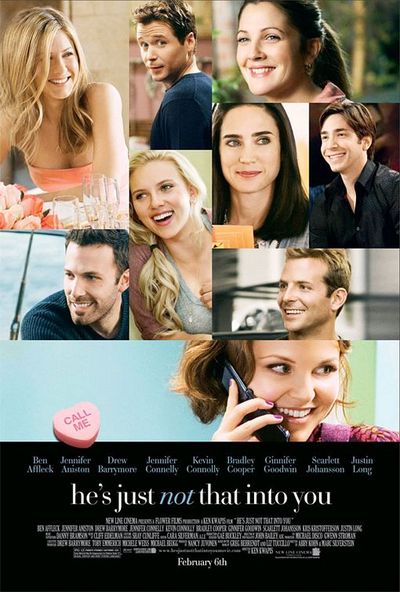