The look and feel of “Gomorrah” closely resembles the recent work of director Fernando Meirelles (“City of God”), taking a semi-documentary approach to the drama to best grasp the frightening authenticity of it all. The story at hand is a crisscrossing mishmash of characters all struggling to make ends meet and process their sins while trapped in a diseased union with the mob. The bind extends to a middleman cash distributor who worries about his future; a 13-year-old boy getting his first taste of gang life; a frazzled haute couture tailor working around his criminal commitments; a pair of businessmen looking to profit from illegal toxic waste dumping; and two brash teenagers who are desperate to become feared crime lords, stupidly messing with the Camorra as they endeavor to build their reputation.

“Gomorrah” is a nightmarish ride of disturbing behavior, with its cinematic fabric masterly woven by director Matteo Garrone, working from Roberto Savino’s hot-potato 2006 book on unsavory Camorra activites. Steering clear of inflexible dramatic structure to instill a hot-poker sense of verisimilitude to the filmmaking, Garrone works forbidding areas of atmosphere to articulate the mounting dread, taking his camera into the decrepit slums and threatening countryside of Italy, home to unspeakable acts of violence and violation as mob business is conducted. The often hand-held camerawork is patient and careful to isolate the tension without breaking the spell, making for a nerve-racking feature film where anything can and often does happen.

While “Gomorrah” maintains a palpable distance, the sordid nature of the story is hypnotic, especially in the manner Garrone sustains the plot threads, moving back and forth between Camorra’s business world dealings in fashion and pollution to the streetwise encounters with drugs and loans. It’s a heady brew of perpetual hazard that keeps the viewer glued to the screen waiting for the inevitable burst of bullets to ring through the air, or in the case of the two teens aching for trouble, a moment of foolishness that somehow reinforces their bravado. Unexpectedly, the film never celebrates the dark side of humanity, preferring to stage the aggression coldly to unnerve the audience with thrilling precision. It’s alert, superior directorial work from Garrone, who, perhaps not even realizing it, has redefined the nature of the mob genre. He’s scrapped away the lusty glow of brotherhood brutality to reveal its insidious nature and predatory intentions.

The last act and epilogue of “Gomorrah” both deliver a killing blow of certainty about the Camorra organization: they’re coming to your front door; slowly, surely working away from hoodlum activities to blend into everyday commerce, even, as the film states, contributing to the reconstruction of the World Trade Center. Now if that doesn’t send a chill up your spine, perhaps it’s time to put down the Tony Montana and pick up this frightening wallop of reality. 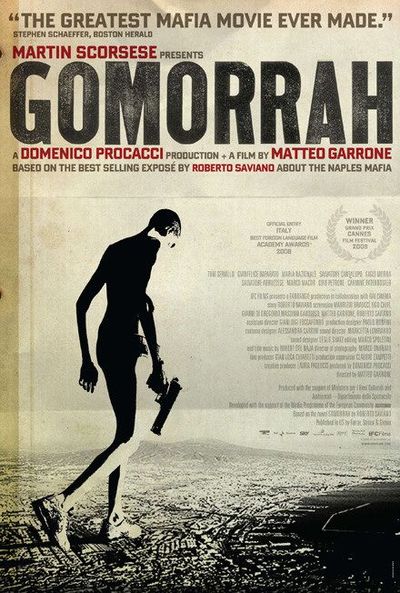