Searching the Camp Crystal Lake area to find his missing sister, Clay (Jared Padalecki, “Gilmore Girls”) happens upon a group of partying kids (including Travis Van Winkle, Arlen Escarpeta, and always unwelcome Aaron Yoo) looking to spend a lively weekend at a vacation home. Consumed with ample opportunities for sex and drugs, the gang begins the festivities. However, Jenna (Danielle Panabaker, “Shark”) is sympathetic to Clay’s situation, and as the two set off to investigate the deep woods for any signs of life, they discover the lair of area legend Jason Voorhees, who uses the camp’s decaying remains as a killing field for unlucky visitors. Realizing their friends are being systematically murdered by the hockey-masked executioner, Clay and Jenna struggle to escape Jason’s wrath, finding clues to survival within the deformed killer’s past.

Certainly it’s easy to loathe anything emerging from Michael Bay’s production company/remake factory Platinum Dunes, especially when the company royally screwed up the “Texas Chainsaw Massacre” back in 2003, turning sincere screen fear into a parade of over-stylized idiocy. While director Marcus Nispel returns from his “Chainsaw” duty (making the horrendous Viking epic “Pathfinder” in the interim), his skills have been sharpened, or perhaps he’s met a franchise he can’t bungle too badly no matter what he throws at the screen. Either way, “Friday” shows surprising buoyancy in the face of assured failure.

The new “Friday” is much like the old “Friday,” only this fresh go-around with the Voorhees legacy is a tad more self-aware with fan requirements and genre staples, turning the finished film into a highlight reel of clichés for the faithful. The nudity (topless water-skiing!), head-splitting bloodshed, and twentysomthing behavioral blunders flow abundantly in the update, keeping on course to tickle those out there that demand horror fit comfortably into tiny boxes of expectation. In fact, most of the “Friday” remake is fueled by this slavish attitude to the so-called “demands” of the film series. Familiarity is perhaps the remake’s greatest sin and most celebrated element.

Nispel pays careful attention to the sordid mischief of “Friday,” offering tribute to the previous films by sticking to a wheezing formula thousands of movies have stolen for their own profit. It’s a tiresome proposition at times, as the screenplay barely rises above monosyllabic dialogue exchanges and colorless character development, while the rest of the movie waits around for the beloved “kills” to roll out. After a 15-minute-long (!) pre-title prologue compacting backstory and location into a tidy opening paragraph, “Friday” settles down with recognizable structure. However, it’s the little cracks in the pavement that make the remake come alive.

Nispel is hardly a master suspense craftsman (and heaven help me, somebody get this guy a proper lighting scheme), but he shows off some reasonable flashes of tension. I especially enjoyed how Nispel turns Jason into a swift blunt object that plows through his victims, and not just a humdrum collar to shock the audience with. Stalking his prey absent the normal routine of endless boo scares, Jason is more Bruce the Shark here than his old dilly-dallying ways, sprinting around to perform his finishing moves in ways Nispel executes rather cleverly. It also helps to have some charismatic prey, as both Panabaker and Padalecki make the most of their screentime breathing some life into stock slasher roles.

Filled with references to past “Friday” films, the remake is solely for the fans. I’m sure Bay and Nispel would like to believe they’re bringing Jason to a new generation with this feature, but it takes a true Voorheesologist to cleanly decipher the backstory to the character, and the remake doesn’t have the patience to fully rebuild Jason from the ground floor. Once “Friday” starts cooking and Jason begins to take down the stoners and horndogs (with machetes, arrows, and antlers), it’s amazing to watch Nispel work the knobs as well as he does, staging familiar sights and sound, yet stripping away the stagnancy of it all with little lens-flared tweaks here and there. There were nine “Friday” sequels, and none of them could claim the same freshness.

To anyone who scoffs at the very idea of a “Friday” redux, I agree wholeheartedly. Horror remakes are unnecessary, unforgivable, and often brutal to endure. That said, “Friday the 13th” is an unobtrusive production that dances agreeably with established mythology and immorality to please fans young and old. After turning Jason into a cartoon, a videogame, a demonic worm, and a space monster, I think a little reminder of his woodsy hell-raising salad days isn’t such a terrible thing. 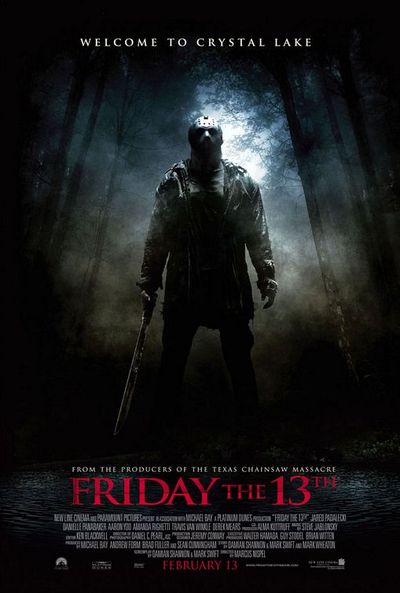