Kings of the football team and also of high school girls, lotharios Shawn (Nicholas D’Agosto) and Nick (Eric Christian Olsen) are preparing for football camp, where they will spend a few weeks with freshman slobs and their fouled-mouthed coach (Philip Baker Hall at his most desperate). Overhearing the details of the female oasis known as the Fired Up! Cheerleading Camp, the boys decide to fake a calamity and join the Gerald Ford High School Tigers as they try to avoid becoming the worst cheer squad around. Once arrived, Nick and Shawn start to work their horndog magic on their fellow cheerleaders, camp counselors (Molly Sims), and a reluctant innocent in Carly (“Disturbia” wet blanket, Sarah Roemer), only to find the true meaning of teamwork along the way as the Tigers take on their rival, the Panthers (led by AnnaLynne McCord, “Gossip Girl”).

Unusually amped for a teen comedy, “Fired Up” doesn’t know what to do with its energy. A cinematic creation shaped out of moldy Play-Doh, the picture has only three things on its mind: spitting out improvisations, PG-13 titillation, and somehow cashing in on a cheerleading genre that’s already passé. In reality, “Fired Up” blends all of its intentions into one big headache of a movie, with director Will Gluck highlighting his inexperience behind the camera through routine music video shot construction and a frighteningly permissive attitude with his cast, who all think they’re God’s gift to comedy.

D’Agosto and Olsen are the main offenders here, screeching their rapid-fire quips to the camera as if top volume makes the moment that much more hilarious. Who really knows how much of the screenplay by Freedom Jones made it to the screen since the actors appear to be riffing their own gags without any sort of direction from Gluck. After a brief opening setting up the characters as across-the-board jerks, “Fired Up” assumes an ugly, profoundly unfunny quest to toss any sort of non sequitur into the stew, praying conventional absurdity will wash over audiences like laughing gas. Coming from the likes of Olsen (who makes Dane Cook look like Oscar Wilde) the results are expectedly irritating, compounded further when the references step away from the realm of teen yuks and into thirtysomething improv theater troupe zingers (the mentions include Alvin Ailey, “Hamlet 2,” and Crocs).

The ultimate crime of “Fired Up” (besides a literal commercial for Staples in the third act) has to be the feature’s unwillingness to roll into a flat-out farce. Indeed, Gluck and Jones actually have the nerve to inch toward sentimentality, as Shawn develops feelings for Carly while spreading STDs around the camp. Do the filmmakers really think anyone is going care about these characters? Calling “Fired Up” formulaic is stating the obvious; the movie even hands Carly a dim-witted, 90’s loving, “older” bullying boyfriend (played with acute toxicity by David Walton, who is also a year younger than Olsen) to craft a loathsome break-up-to-make-up scenario for the “Cheer Off” grand finale. Perhaps I’m fretting too intensely over flagrant stupidity, but when something this crude and assiduously broad can’t even slap a smile on my face within 90 minutes of opportunity, something is desperately wrong with the production.

Here’s another case to skip “Fired Up” in theaters: the aforementioned PG-13. Ah, there’s nothing like a smutty teen comedy where the guys ogle…fully dressed women. A mere appetizer for the guaranteed “Unrated” version on DVD, the tamer “Fired Up” tries to cut corners by liberally deploying the word “poop” (those teens today with their filthy mouths!), cutting around or cloaking nudity, and downplaying Shawn and Nick’s allegedly volcanic sexual exploits. While the thought of a longer version of this picture puts me into a fetal position, I would at least hope that anyone willing to ingest this poison be able to receive the most potent poison available. 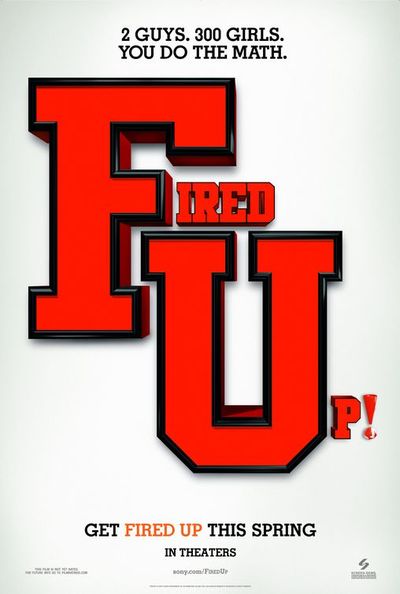 Just the picture of those two old dudes perving all over those teenagers is sooooo disgusting. Ick. Plus that blond guy looks like he's pushin 40...

I saw this movie it was funny--- really funny. This reviewer is hilarious with his hatred. I guess he feels better about himself hating on things.
At least everyone who sees this doesn't have to look in the mirror and see Brian Orndorf's face. If they did there'd be puking all over America.
Have fun living on the internet, loser.

"Have fun living on the internet, loser."

Oh, the irony you bring out of people, Brian.

BTW, the movie is awful. Saw it last week at the local college and half the crowd walked out midway through.

Excellent review! I'm a huge fan of your masterful use of adjectives.

I have both positive and negative opinion about "Fired up" .The comedy secnes were quite hilarious.However most other scenes were based on old jokes.The story-line seemed boring to me.And its aimed for the teenage guys only.You must not take your girlfriend to watch this movie! Overall I think this movie should be rated 2.5/5.

i love you Nicholas D'Agosta!!