From the director of “The Nightmare Before Christmas” and “James and the Giant Peach” comes “Coraline,” another foray into luxurious stop-motion animation and wildly imaginative fantasy visualization. It’s a gorgeous picture to behold, but fails to absorb smoothly, for the surreal nature of the material often overwhelms basic storytelling requirements. “Coraline” is an easy film to admire, but not always to watch.

Moving with her family from Michigan to a remote apartment building inhabited by demented stage and circus performers, Coraline (voiced by Dakota Fanning) is a curious girl, bored to tears with her new home and frustrated with her parents’ lack of interest. Finding a small doorway hidden behind the living room wallpaper, Coraline decides to investigate, entering a bizarro world where her button-eyed Other Mother (Teri Hatcher) and Other Father (John Hodgeman) welcome her with open arms, giving the young girl all the attention she desires. While loving her adoptive family, Coraline grows nervous when she learns the price for such affection is the sacrifice of her own eyes and the imprisonment of her real-world parents. Working with help from both dimensions, Coraline attempts to escape her predicament, only to find Other Mother’s intentions go from loving to malicious the more she resists the invitation.

Adapted from the novella by Neil Gaiman, “Coraline” has been stretched out to feature length whether it likes it or not, plowing through expected and unexpected realms of the unreal. The whole package has been attractively manufactured by director Henry Selick, who delivers big on the promise of the source material by arranging a literal carnival of horrors to alternately bewitch and betray the titular heroine as she wades through impossibly flooded fields of the subconscious.

It’s impossible to deny the picture’s visual mastery, especially when the film is a proud member of the stop-motion club, forgoing routine CG sheen for exhilarating textures and luscious artistry that can only emerge from this painstaking process. Selick masters a miniature world for the film, indulging reoccurring Gaiman themes of heroism and magic while furthering his own interest in creepy crawly spooky creatures and bizarre Burtonesque production design. “Coraline” is a gorgeous film, made even more impressive when viewed in its native 3-D, adding another layer of fragrant fantasy dimension to an otherwise jam-packed bit of whimsy. A small part of me wanted the film’s sound to accidently cut out during the screening, just to remove the burden of the story so total focus could be paid to the majestic needlework visuals Selick portions out by the shovelful.

With Gaiman’s ideas lengthened, including the addition of slouching friend Wybie to help Coraline out, the picture has difficulty keeping perfect time. Most of “Coraline” seems to travel two steps further than it has to, indulging in the whirling psychedelia to a point of exhaustion. Meeting neighbors such as beet-loving Russian acrobat Bobinski (Ian McShane) and a pair of retired acting sisters, the buxom Miss Forcible (Jennifer Saunders) and the obese Miss Fink (Dawn French), provide an excuse to get out of Coraline’s head, but their surreal tangents spiral out of control, some scenes to a point of unexpectedly macabre results that will surely provide a few nightmares to younger audience members.

Even if the bruised enchantment runs out of steam long before the movie ends, “Coraline” is a laudable achievement of animation and imagination, giving kids a nice roundhouse kick of unnerving fantasy, perhaps even inadvertently introducing them to the glittery highs and eye-clawing lows of an acid trip. It’s a messy batch of insanity, but it’s utterly beautiful. 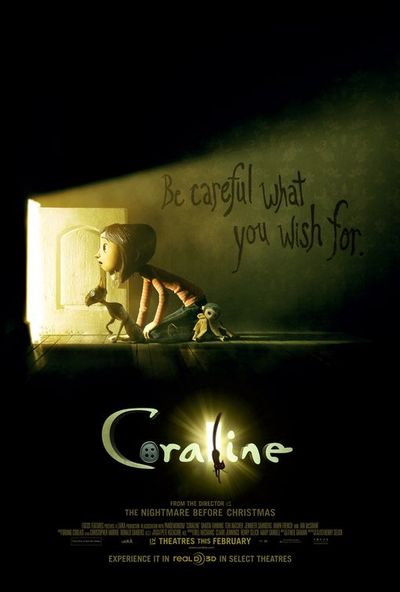 Very good review. I didn't read too much because I didn't want to get spoiled about anything, but you judged the film fairly.

Referring to the nightmarish, alter-universe 'other parents' as Coraline's 'adoptive' parents is both inaccurate and horrifying. Please find an accurate description for your review. Adoptive parents should read the book (see the movie) before exposing their young to tween children.