Living a life of high fashion, Rebecca Bloomwood (Isla Fisher) funds her New York City fantasy with the power of plastic, trusting that the magical cards will allow her to maintain a posh lifestyle on a journalist’s salary. Facing ungodly debt she’s unable to pay off, Rebecca is close to ruin, hopeful employment at a financial magazine will be her ticket out of the red and into her dream job writing for a haute couture magazine. Under the patience of her editor Luke (Hugh Dancy), Rebecca learns the sickening ways of frugality, fighting her urge to buy every article of clothing around her. Realizing her illness, yet blessed with unexpected professional success, Rebecca is put to the test when her job and her debt finally intertwine, leaving the young woman at the mercy of a ruthless collection agent.

To make matters perfectly clear: I don’t hold “Shopaholic” against star Isla Fisher. It’s not her fault the picture is a shallow, worthless return trip to the land of BFFs, labels, and snobby New York society. A razor-sharp actress with clear gifts for comedy of all shapes and sizes, Fisher is the lone sparkly spot of the picture, whirling through the film at top speed, showcasing dynamite timing and an impressive appetite for silliness that promises a much brighter future ahead of her. Fisher is working up a sweat to make “Shopaholic” work, but her effort is wasted on material that’s exasperatingly formulaic.

Directed by P.J. Hogan (“My Best Friend’s Wedding”), “Shopaholic” takes not one, but two books from author Sophie Kinsella’s series and attempts to boil them down to broad depictions of guilt and rainbow-hued redemption. The end result is a confusing picture that spreads out too many characters over too little substance, using the magic spell of fashionista fetishism to keep the target audience glued to the screen, powerless to cry foul while supporting characters are only passably considered or outright unexplained (Leslie Bibb, here as Rebecca’s magazine rival, is a complete question mark), and the script literally traces pages on structure from Screenwriting for Dummies (meet-cute, break-up-to-make-up, savior parents).

Hogan attempts to spice up the mundane particulars of the story with candy-colored costume designs (Rebecca is so ornately decorated, she looks like one of the Watchmen) and whimsical touches (store mannequins come alive and urge our hero to purchase), but the penniless truth at the core of this daydream is pretty sobering. However, the true message of feverish consumerism is torn to shreds and quickly forgotten to spend time with Rebecca’s pal, who screams bloody murder when she learns a bridesmaid dress has been sold (the horror!), or the debt collector character, who breaks about 50 state and federal laws to nail Rebecca for her money owed, culminating in a scene where the bespectacled nerdenheimer villain lists sensitive financial data on national television to humiliate the young woman. While logic isn’t a quality “Shopaholic” brags about, I don’t understand why Hogan didn’t just make the collector a liquid metal T-1000 creation to chase Rebecca around. Now there’s some tension! It’s not like anything else here is grounded in reality; indeed, this is the same movie that has Joan Cusack playing Rebecca’s mother.

With absolutely no chemistry available between Dancy and Fisher, the romantic intentions of “Shopaholic” are also bungled, left to wither with another half-realized concept: Rebecca’s 12-step group of fellow consumers. “Confessions of a Shopaholic” is an exceedingly trite jumble of nonsense, even veering into tender areas of wish-fulfillment irresponsibility, cloaked under a blanket of gumball escapism. I can’t imagine what a nightmare this movie would’ve been without Isla Fisher’s boundless enthusiasm to save at least isolated moments of it. 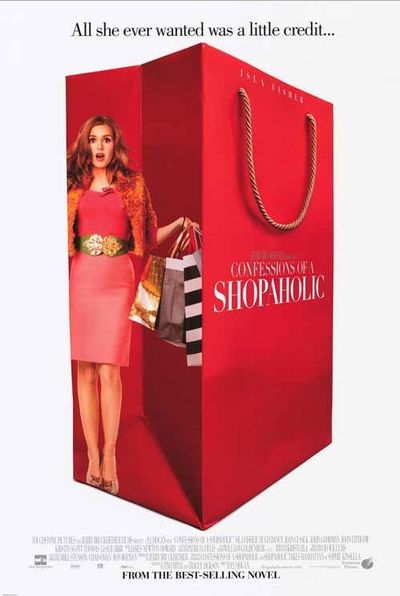 I see this movie as a mix between Sex and the City and Legally Blonde; getting fairly negative reviews. With that, I want to see it and have my expectations set. Maybe I will be pleasantly surprised.

Isla Fisher was perfectly cast in this movie. She is both funny & lovable.

I think the movie had good bits of comedy.However near the climax, it becomes boring...You may take your kids to watch this movie together.Considering the movie's story and its effects i would rate it 3/5.