The second of pop star Jessica Simpson’s two desperate attempts to become a top-tier big screen comedienne (the other being last year’s odious “Blonde Ambition”), “Private Valentine: Blonde & Dangerous” (aka “Major Movie Star”) is pretty much as unremarkable and borderline unprofessional as one might imagine. A riff on “Private Benjamin,” “Valentine” is a graceless, flavorless farce built around the idea that Simpson’s dimwit routine still holds appeal and the hope that the target demo has never heard of Goldie Hawn. It’s not the worst film to escape from the Simpson Family promotional think tank (“Papa” Joe produces), but it’s a dreary, numbing comedy that has rightfully bypassed theatrical release for a quietly embarrassing DTV launch.

A pampered actress with a horde of agents, stylists, and sleazy family leeches trailing behind her, Megan Valentine (Jessica Simpson) has all the fame and fortune a young woman could ask for. However, her longstanding naiveté has cost her, soon discovering her wealth siphoned away and her manager sleeping with her boyfriend. In a blaze of booze and depression, Megan joins the U.S. Army, finding the outfits cute and the change of scenery welcoming. Sent to boot camp under the strict guidance of Sgt. Morley (Vivica A. Fox), Megan’s eyes are opened wide by the harsh conditions and relentless intimidation, pushing her to quit. However, spurred on by the friendships she’s formed with her fellow enlistees (including Olesya Rulin from the “High School Musical” franchise and Keiko Agena from “Gilmore Girls”), Megan is determined to prove herself to those who doubt her abilities.

It’s not that I harbor any ill will toward Simpson and her acting career. After all, she seems pleasant enough and quite capable of commanding a crowd, unlike many performers today. My irritation arrives with the dopey material she selects for herself, watching as she hits the same comedic beats over and over. The ditz routine has run dry for Simpson and her platinum force-field-like hair, and “Valentine” is a 100-minute-long reminder on how the actress either needs to seek out a severe challenge for herself or give up on the movie dream altogether.

The screenplay by newcomers April Blair and Kelly Bowe is a bustling cliché factory, pumping out a narrative that takes Megan through every possible routine that comes with a fish-out-of-water Army recruit story. It’s all here: the hard-ass Sergeant, the spiteful private (Cheri Oteri), the brutal hazing period, the hard-earned respect, and the climatic war games. “Valentine” even shoves a few Hollywood stereotypes into the mix by making Megan’s agent a tanned, earpiece-loving Jew (Steve Guttenberg) and her immediate entourage gay. Hell, the film’s borderline racist as well: when faced with only live fish to eat during the aforementioned war games, who suggests a sushi option? The only Asian character.

Director Steve Miner, who truly deserves a film like “Valentine,” guides the action with a palpable disinterest. He backs further and further away throughout the picture, letting Simpson do her eyebrow-twisting, “oh, did I do that?” sex kitten thing, while Fox and Oteri fail to score their own laughs. Even wretched man-child Andy Milonakis appears as a greasy, conniving member of the paparazzi, further proving my assumption that anyone who wanted to be in this film was permitted a role as long as they fronted the plane fare. In retrospect, perhaps Miner was right to shut down completely. The sushi bit alone would be enough to give up on moviemaking forever.

Want more examples of the “Valentine” experience? Well, there’s Simpson doing a Joe Pesci impression to help toughen her Army buddies, an ill-timed Circuit City reference that induces an unintentional cringe, a disco dance sequence (of course), and a doozy of a scene where the enlistees break into a forbidden stash of chocolate, only they don’t eat the delicious bars as much as intentionally fellate them, while the camera lingers pornographically.

The anamorphic widescreen (2.35:1 aspect ratio) presentation for “Valentine” is a middling affair, with a slightly washed-out image quality that robs Simpson of her well-earned golden glow. Black levels are steady and image detail is abundant. The only element that’s missing is vivid color representation.

The 5.1 Dolby Digital sound mix on “Valentine” is rudimentary at best, with a proper separation of dialogue and soundtrack selections, keeping most of the action in the front channel to best underscore the sitcom experience.

English and French subtitles are available.

“Deleted Scenes” (58 seconds) present some cringing Milonakis improvisation and bleeped cursing from Fox. Why include these nothing bits on the DVD? I have no clue.

“The Making of ‘Private Valentine’” (9:12) is a BTS featurette with a little more meat than expected. The brutal Louisiana locations allow for some amusing anecdotes from the cast, especially when talk turns to the legion of bugs that swarmed the set. Oddly, Simpson doesn’t participate in the interviews.

And a Trailer for the film has not been included on the DVD.

There’s a reflective moment late in “Valentine” where Megan stops to reassess her life, wondering how her once-perfect career has led her to such awful, D-list movie projects without even realizing it. Now there’s a completely unintentional, perfect, and quite beautiful summation of “Private Valentine: Blonde & Dangerous” and its star Jessica Simpson. 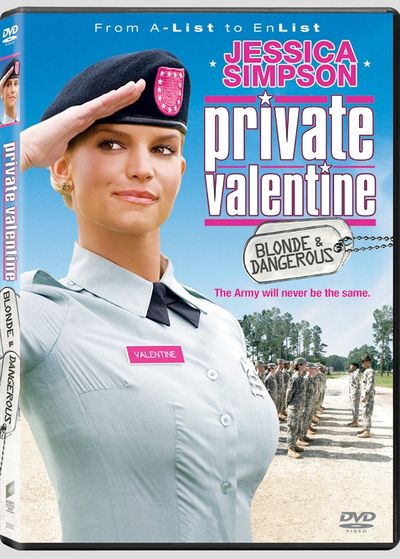 Hi, thank you for the review, so I don't have to watch the movie!

I rented this - from the library - and yes it was a DUMB ripoff of Private Benjamin. Ethnic stereotypes, check. Hunky male drill sergeant, check. Prank pulled on condescending female drill sergeant, check. Commanding officer who supports her efforts after enough mistakes to get anybody else kicked out, check. Impossible plot contrivances, check (Valentine enlists and ships out the next day, then is discharged because she never took a physical, then a week later is allowed to re-enlist ... back with the same class of recruits.)

Rated PG-13 for drug and sex references? No, just a few naughty words, and the DVD cover pic above of Jessica's tightly-stacked uniform.