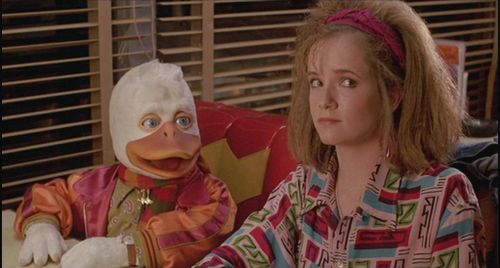 Taken from his comfortable home on Duckworld by interdimensional scientific error and sent to Earth, Howard (voiced by Chip Zien) is one confused three-foot-tall, sass-mouthed bird. Landing in Cleveland, Howard meets Beverly (Lea Thompson), the lead singer of the rock band Cherry Bomb and the one human not completely terrified of a talking duck. Taking the confused creature into her apartment, Beverly and Howard strike up a friendship, soon looking to their lab-assistant pal Phil (Tim Robbins) for help returning Howard to his rightful universe. Under the care of Dr. Walter Jenning (Jeffrey Jones), the experiment to open another deep space doorway for Howard goes horribly wrong, instead bringing down from the heavens an entity knows as the Dark Overlord, who takes over Jenning’s body and plans worldwide destruction. Faced with certain doom, Howard and Beverly attempt to stop the Dark Overlord before it’s too late, hoping to find a way to send Howard home in the process. 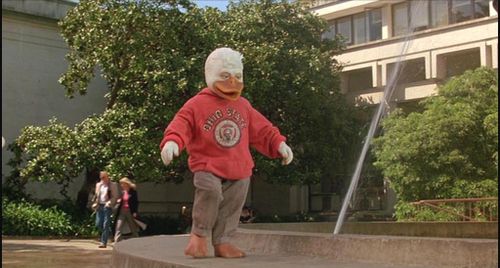 The short answer: yes, “Howard the Duck” is nearly as ghastly as history has recorded. However, the reality of the film is far more complicated than a simple stubby finger pointed in pod person horror at George Lucas. Adapted from Steve Gerber’s genre-ribbing comic book series of the 1970s, “Howard” was stripped of its satiric bite by filmmakers Willard Huyck and Gloria Katz (screenwriters of “American Graffiti” and “Indiana Jones and the Temple of Doom”) and refashioned into a mid-80s event film, reborn under the producing power of Jedi guru Lucas, who at this point was enjoying the apex of his power after launching three “Star Wars” movies into the cinema history books. The package was unbeatable, the concept limitless, and the public’s appetite for special effect extravaganzas was insatiable. So where exactly did “Howard the Duck” go wrong? 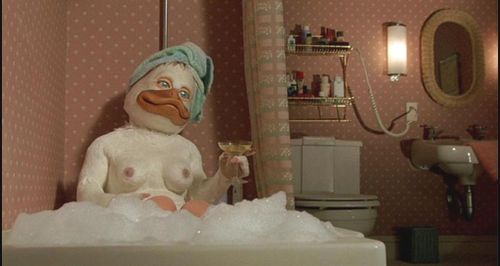 Watching the film today reveals a disturbingly incompetent management of tone from Huyck and Katz, who fail to instill the film with a balanced mood that welcomes the splatters of sarcasm and embarrassing sentiment that eats up most of the picture. The filmmakers misread the perspective of the Gerber creation, taking the character away from irritable anthropomorphized satire and into a something slightly perturbed, slightly cuddly, ensnared in material that doesn’t know if it wants to remain R-rated or appeal directly to impressionable youth. The divide damages the audacity of the concept, which mixes pot jokes, sexuality (why is Howard’s first job on Earth as a towel boy in a brothel?) and bestiality (exactly why is Beverly turned on by Howard again?), and duck nudity with kid-friendly displays of glowing special effects, scary monsters, and the natural curiosity of a little person trapped inside an bright-eyed, animatronic-enhanced duck suit. Attempting to appeal to both adults and children, the film frustratingly fails on both ends.

The hostile cartoon nature of the film also tends to grate upon impact. Huyck and Katz imagine a primary colored world for Howard where the oddity of a duck suit could conceptually fit in amongst the bright animated happenings of Earth. Filled with neon architecture, punk gangs who resemble the day-glo thugs of “Batman & Robin,” and era-massive hair and makeup, “Howard” strains to assume a madcap posture, but it all spills over into chaotic noise far too quickly. The filmmakers are spinning furiously to make the material burn evenly as a farce, yet it seems the more Howard speaks and interacts with his human pals, the more the movie curdles and pushes patience levels to the breaking point. Truthfully, it’s unfair to lay on the all the blame on Zien’s annoyingly ball-busting, pun-happy vocal performance, for Tim Robbins is pure torture to watch as well, taking his character’s youth and science-nerdish impetuousness and forming a piece of acting made up entirely of shrieks and eye bulging. It’s a miracle he found work after this film. While running an unreasonably punishing 110 minutes (really, 70 minutes is pretty much the limit for talking duck movies), “Howard” has a few highlights worth noting. The special effects are an appropriate 80’s batch of enchantingly sloppy mattes and stop-motion superiority, with stellar work from Phil Tippett on the final transformation of the Dark Overlord into an intergalactic (slightly vaginal) demonic scorpion beast. I was also fond of Lea Thompson’s effervescent effort as rock star/new wave tart Beverly. Keeping her chin up high while prancing around in high heels and trading one-liners with a robot head, Thompson astonishingly never breaks character, adding a needed pinch of fizzy earnestness to a sour, impotent comedy. Anyone who can generate even a twitch of sexual heat with a duck who enjoys nipple play deserves some type of industry award or possible sainthood. 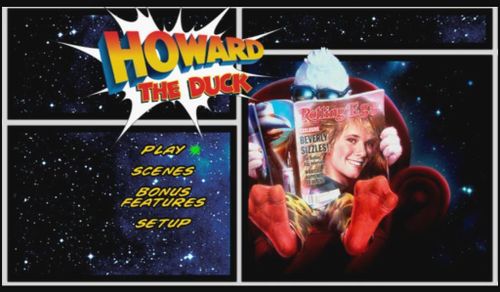 Finally available legally on the North American DVD market, “Howard the Duck” arrives with an agreeable anamorphic widescreen (1.85:1 aspect ratio) visual presentation. While hampered by an imperfect print that’s dirt-heavy in the opening reel, the colors and generally heightened appearance of the photography are preserved competently on the DVD, with black levels stable and fleshtones (ducktones?) accurate. Detail is terrific, with a nice overall grainy quality, though a few sections of the movie reveal faint artificial sharpening.

Mixing sci-fi explosions with a retro synth blast of pop music, the 5.1 Dolby Digital mix on “Howard the Duck” keeps the film’s energy up (not always a welcome development), with strong attention to bottom-heavy fantasy tangents and slapstick. The surrounds are well taken care of, especially during moments of emergency and for all nightclub atmospherics. Dialogue is preserved and separated adequately from the soundtrack. French and Spanish 2.0 tracks are also available. 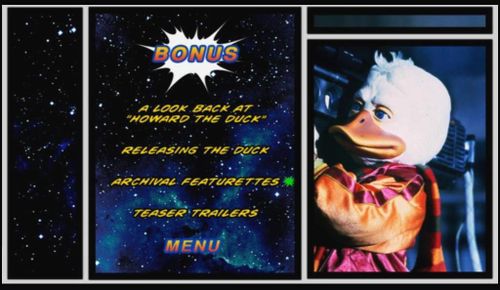 “A Look Back at ‘Howard the Duck’” (26:21) is amazing to watch, if only to see actual members of the cast and crew sit down and talk up this volcanically maligned motion picture. While George Lucas doesn’t appear (no shock there), filmmakers Huyck and Katz bravely reveal themselves, along with stars Lea Thompson, Jeffrey Jones, and Howard’s human element under the duck suit, Ed Gale. If you don’t walk into this featurette expecting apologies and regrets, it’s an absorbing recollection of the film’s rocky journey from page to screen.

While Huyck and Katz admit the film lacks a little in certain technological and narrative areas, the tone of the piece of one of fond production memories and “before its time” boasting, nicely administered by the charming interviews. Gale is an especially amiable presence who could probably fill a book with his experiences literally trapped under Howard’s artificial feathers.

“Releasing the Duck” (12:53) cuts a little more directly to the film’s failure at the box office and its reputation as a disaster. Again, Huyck and Katz remain positive about the film, trying to push across the notion that the movie has many fans and the concept was intentionally oddball, thus rolling out a red carpet for derision. I’m not buying the upbeat attitude from everybody (at least Thompson admits her disappointment, though indirectly), but I can’t deny the attractive polished feel of the featurette.

The final act of “Howard the Duck” is a clueless, sludgy display of pyrotechnics, nonexistent tension, and aggressive directorial buffoonery that takes the picture from a mild annoyance to a get-this-damn-thing-out-of-my-life experience, making all the ill-will aimed toward this picture feel immensely justified. Surely there were worse movies made during the 1980s, but nothing cut quite the same striking figure of excess, foolhardy ambition, and artistic futility quite like “Howard the Duck.” 23 years later, not much has changed. 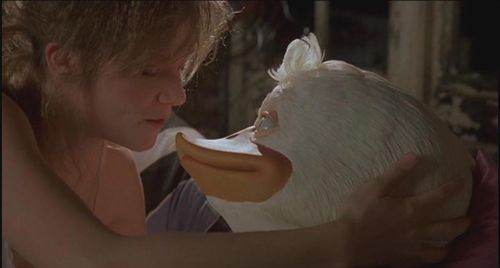 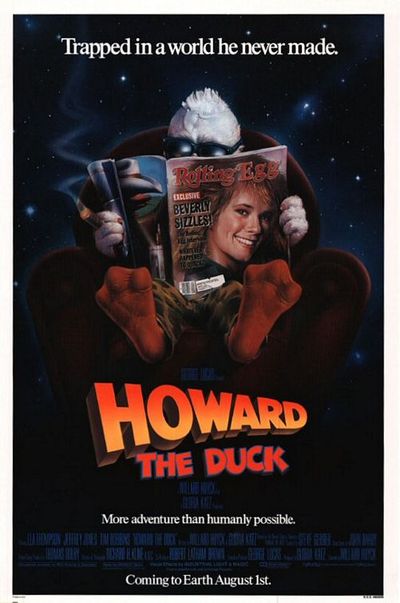 If it is the same print as I saw on Hulu, there is a slight change to the soundtrack - scenes that included visuals of Daffy Duck (during the "duck hunting" television scene) previously had his voice included. While the images is still there, Daffy's voice has been edited out.