The new “Underworld” installment is being touted as the prequel the die-hard fans were demanding. That’s super-secret Hollywood code for, “Kate Beckinsale refused to appear no matter how much money was offered.” After the abysmal “Underworld: Evolution” from 2006, the prospect of another go-around with werewolves and vampires wasn’t welcome, though I have to hand it to the producers for having the sheer balls to replace Beckinsale with Bill Nighy and Michael Sheen, perhaps hoping acting expertise will pull this pointless prequel out of the gutter. The risk pays off for the rickety franchise, with “Rise of the Lycans” a swell, if profoundly trivial return to form for the creaky “Underworld” universe.

In the beginning, the Vampires ruled the land, using the mysterious Lycans as slaves to build and protect their empire. Now with the creatures entertaining plans to revolt, Vampire leader Viktor (Bill Nighy) struggles to keep control, finding powerful Lycan rebel Lucian (Michael Sheen) gathering a makeshift army to fight back, using his undying love for Viktor’s daughter Sonja (Rhona Mitra) to soothe his tortured soul. Now with hope for Lycan freedom within his grasp, Lucian declares war on the Vampires, setting up a ferocious feud that will last for centuries to come.

While it’s still the same old “Underworld” fantasy playground of gloomy cinematography and histrionic acting, much has changed behind the scenes for the latest installment. Gone is director Len Wiseman, who took wife Beckinsale with him, though the former receives a story credit while the latter makes a bizarre cameo constructed out of footage from the original feature film. Bumped up from creature duties to the director’s chair is Patrick Tatopoulos, a man who knows a thing or two about the gruesome details of raging monsters. At its best, “Rise of the Lycans” is a convincing tango of hyper-edited violence, combining the concept’s Shakespearean tremors with a modern cinematic quest for fantasy mayhem, brought vividly to life by the cast and crew, who do their damndest to make this budget prequel spring to life.

It’s nice to watch “Rise of the Lycans” at least try to slip some new energy into this tired franchise. With “Evolution” effectively snuffing out the intriguing genre escapism the original film provided, it seemed as though the “Underworld” promise was cut down prematurely. The prequel benefits from not having to build on the numerous mistakes of the sequel, inventing a fresh angle on the shadowy tale that allows for more melodramatic posturing, better actors, and room to spill monster blood by the bucketful. That’s not to say “Rise of the Lycans” is an especially intoxicating distraction, but it retains a gothic spirit the last film never bothered to establish, and the work from Nighy and Sheen keep the formulaic power struggle/romantic tragedy plot wide awake.

Surely these superior actors might not be as attractive as Beckinsale, or perhaps fit as snugly into PVC battle garb, but Sheen and Nighy convincingly portray the world-changing cry of war. “Rise of the Lycans” is built entirely around these two actors chewing scenery, with Nighy acting the bejesus out of his aqua blue contact lenses, while Sheen assumes a sweaty Kip Winger swagger, puffing out his chest and feeling every line of torment like a pro. Mitra adds to the mix quite agreeably as the inadvertent catalyst for rebellion, but the feature is reserved for the men. Both actors take the wafer-thin screenplay and make it dance with their exaggerated conviction.

Downplaying the murky Vampire/Lycan mythology that grew to suffocate the previous films, “Rise of the Lycans” is a 90-minute-long horror passion play that benefits from brevity. Left with only a small pocket of timeline to embroider, the prequel manages to develop a breezy, bloody, operatic experience. Even better, it wipes away the toxic awfulness of “Evolution.” It’s now safe to return to the “Underworld.” 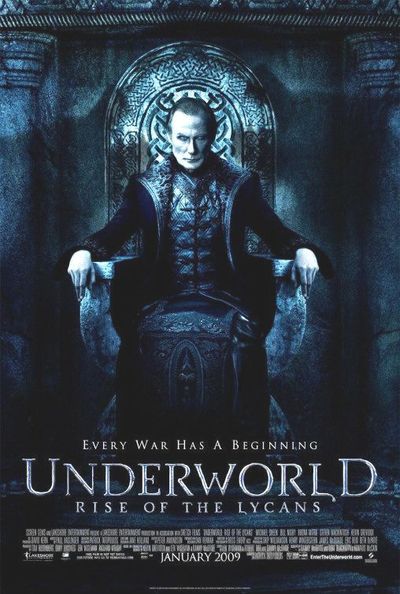 "...combining the concept’s Shakespearean tremors with a modern cinematic quest for fantasy mayhem..."

I think you like to hear yourself type. hahahah