Over the course of the last year, Elizabeth Banks has starred in five motion pictures (six if you open up the range a few months). A talented, appealing actress, Banks has dominated the multiplex with a successful range of genres and tempos, but I worry that suspense just isn’t her weapon of choice. “The Uninvited” is a slapdash offering of chills hinged on Banks’s tenuous ability to channel her inner Hannibal Lecter. She can’t manage the workload, and “Uninvited” doesn’t clutch a strong enough premise to overcome her lack of juicy depravity.

Released from a mental hospital after surviving a suicide attempt months earlier, Anne (Emily Browning) returns to her lakeside home to spend time with her father (David Strathairn, making a boat payment) and beloved sister Alex (Ariel Kebbel). Standing in the way of happiness is Rachael (Elizabeth Banks), a former hospice nurse who lived in the house when Anne’s terminally ill mother brutally died in a fire. Resenting Rachel, Anne and Alex try to restore order to their lives, only to stumble upon clues that suggest their future stepmother was responsible for the murder. Fighting demonic signs from the dream world, Anne works to prove Rachel’s guilt, finding the accused ready to strike back with even further malice.

A remake of the South Korean smash hit, “A Tale of Two Sisters,” “The Uninvited” has been sent through the Americanization car wash, coming out the other side as a mild nail-biter, ideal for sufficiently pooped slumber party audiences who won’t demand too much of the first-time filmmakers, billed here as The Guard Brothers (Charles and Thomas). The Guards are on autopilot with “Uninvited,” hurriedly working through the exhausted suspense motions to survive their first big screen job, and the deer-in-headlights vibe pervades the entire feature.

Lacking any sort of tension, “Uninvited” is an entire serving of routine, especially to any Asian horror devotee. While I’m impressed the picture doesn’t explicitly chase terror tangents (the scares are almost an afterthought), the Guards fill the void with splashes of stupidity instead of encouraging ingenuity. Working with an unsophisticated screenplay that has a devil of a time planning out the tight double-dutch game of exposition, the Guards rely on the staples of the genre to survive the night: creepy ghost kids, PG-13 approved ghoulish visuals, and the all-important twist ending. I understand that the directors are working uphill to make these rusted elements tickle the viewer, but I would have more sympathy for the movie if these guys actually tried to scare the audience. Instead, the Guards seem more consumed with getting Browning and Kebbel into swimwear/underwear over staging a legitimate instant of fright.

With the filmmakers off trying to figure out the perfect panty hue, the cast is left to their own devices, exemplified by Banks, who is way out of her league as the potential force of evil. Banks appears baffled by the script, assuming a semi-campy, soap opera stance for her character that’s all wrong for the tone of the film. Banks isn’t funny or threatening, removing the desired tempo of fear the Guards are blindly stumbling around for. That’s not to say Banks isn’t ready for the horror genre, she just needs more than what two guys with a few Xbox commercials to their name can provide in the guidance department.

“The Uninvited” might appeal to the “Tale of Two Sisters” curious, but even then there’s little reason to stay invested in what quickly becomes a grueling 80-minute-long journey into the easily telegraphed and roughly acted. 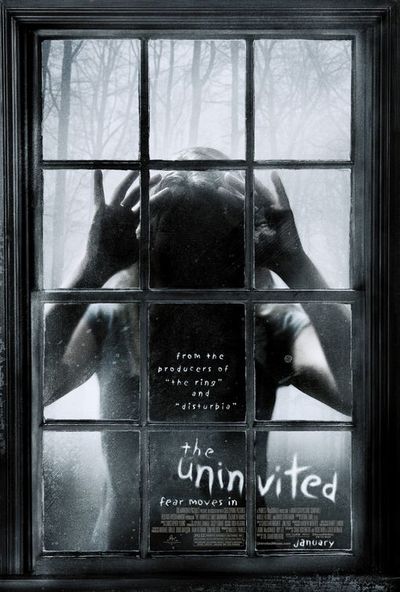 As a matter of fact I have been an evergreen fan of horror movies.But this time I was a bit dissappointed.Some of the scenes were difficult to correlate with the main story and it felt as if something was missing.
I may suggest you all to watch it but dont keep high expectations.