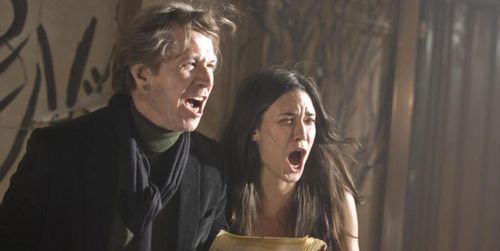 I respect that David S. Goyer desires to pen eccentric genre pieces that both conform to traditions and enjoy a few unique perspectives on scares. I just wish he would stop directing these movies. After three feature films of discouraging quality, Goyer suits up in a beret and jodhpurs again for “The Unborn,” which holds the miserable distinction of being the most dreadful film he’s fashioned to date. With past achievements such as “Blade: Trinity” and “The Invisible” to his name, it’s clear Goyer’s work is getting worse, and his imagination slowing to a crawl.

Casey Beldon (Odette Yustman) is having trouble unlocking the meaning behind her violent dreams. Sensing a demonic force in the guise of a child (named “Jumby”) is after her, Casey turns to the clues left behind by her dead mother (Carla Gugino), who was also haunted by the same nightmares. Finding help in a Holocaust survivor (Jane Alexander) and a rabbi (Gary Oldman), Casey begins to understand more about the spirit, the dybbuk, that’s after her, leading the frightened young woman to her family history for answers on how to stop the ghost before it can inflict more damage on the world around her.

“The Unborn” is a deceptively simple ghost story that attempts to assume more substance than it really needs. Essentially Casey leisurely battling unknown forces of evil for 85 minutes, the film isn’t comfortable playing the concept minimally and effectively. Goyer is keen to muddy up the scare factor by taking his script to uncharted narrative leaps, turning a silly little genre exercise into a labored, convoluted thriller that spends so much time explaining itself, it actually forgets its purpose to freak out the room.

By taking the narrative to the Holocaust and Nazi medical experimentation (borderline tasteless), gemellology, Kabbalah, and exorcism procedures, “Unborn” quickly becomes cluttered with unnecessary weight. Goyer doesn’t have the innate skill to maneuver around his own writing, making most of the film a study in lethargy, watching Casey glumly clomp around her wintry world witnessing horrors beyond her imagination, but oddly lacking the gumption to do anything about it. Goyer directs with conventional touches, utilizing suspense set-pieces straight out of the horror handbook (plenty of cheap scares to keep groans fueled for the entire film) to keep “Unborn” lively, but the effect is actually deadening to both the plot and pace.

Goyer also drops the ball when it comes to fundamental logic, leaving a horde of plot holes and behavioral whoppers (Casey’s improbable five-year-old stalker is a question mark the film doesn’t even bother to address) behind as he fixates on Jodorowsky-like supernatural visuals that typically involve twisting canine and senior citizen heads upside down in a polite demonic gesture of certain doom.

It’s grueling to follow Goyer down the “Unborn” path, and no amount of bathroom glory hole suspense set pieces (seriously) can redeem an otherwise inert horror throwaway, obviously cut to PG-13 standards (you can smell the unrated DVD plans on your ticket stub) to maximize its one-weekend-long box office prospects. The next time Goyer finds himself in possession of a rollicking horror idea, I only hope he learns from this mistake and allows someone else to see it to big screen fruition. 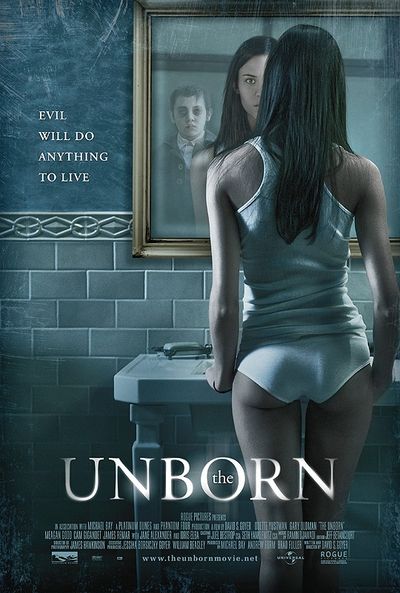