I have to admit, when Luc Besson sits down to invest in an offering of buttery popcorn entertainment, it’s an occasion to celebrate. Flipping through the likes of “District B13,” “High Tension,” “The Transporter,” and “Kiss of the Dragon,” it’s obvious Besson has a skill for picking out tight, twisted, lovable distractions, and “Taken” takes a welcome spot on his mantle of achievements. It’s an inconsequential action diversion, but damn does it pack a wallop over 90 taut, tempting Liam Neesony minutes.

Bryan (Liam Neeson) is a father trying to stay invested in his estranged teen daughter’s (Maggie Grace, 25 unconvincingly playing 17) lush life, putting aside his covert work for the government to make nice with his ex (Famke Janssen) and rebuild relationships. Reluctantly agreeing to send his child off to Paris for a summer trip, Bryan is confronted with his worst fear when the girl is kidnapped by Albanian thugs. Shedding his suburban exterior, Bryan launches into offensive mode, traveling to France with his only goal being the retrieval of his daughter. Stepping into the human trafficking underworld, Bryan is confronted with absolute horror and Euro threat, but nothing can stop his frantic hunt.

The one quality that defines the “Taken” experience is simplicity. Glorious simplicity. Besson and co-writer Robert Mark Kamen script a revenge story that’s built entirely from nuts of aggression and bolts of panic, developing a tale of parental love that stays the course of suspense to the very end. “Taken” is a low-cal dream thrill ride, best appreciated after years of explosion-happy Hollywood blunders, traditionally cluttered with superfluous subplots and unnecessary build up to flaccid finales. “Taken” certainly doesn’t reinvent the wheel, but it’s delightfully agile and bullet-ready determined, aiming to cram all the rage it possibly can into 90 minutes without taking its eyes off of Neeson and his beautifully intimidating performance.

The director of “Taken” is Pierre Morel, the filmmaker behind “District B13” and a man who prefers to keep his havoc blunt. Following Besson and Kamen’s broad lead, Morel dreams up an obstacle course for Bryan as he works his way from the initial interpretation of the crime (through a cell phone recording and help from C.I.A. friends) to the lawless streets of Paris, where Albanian criminal slime rule the streets with their alarming human trafficking scheme. Chasing a sublime Charles Bronson tone (albeit crossbred with Jason Bourne), Morel turns in an exquisitely lean motion picture, nimbly jumping from location to location without the natural hum of the piece interrupted. Morel understands “Taken” is the Liam Neeson show and adjusts accordingly, keeping Bryan’s worry as fine tuned as his wrath, giving the actor plenty of room to play as he maneuvers around clichés and stock villain characters. 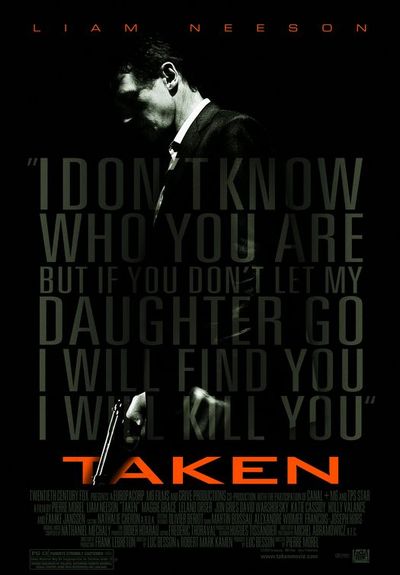