Cult films are best when they sneak up on the fringe audience, battling failure and disgrace to become something special, appreciated by a select few willing to cherish imperfection. “Repo! The Genetic Opera” is a motion picture that thirsts for alternative acceptance, positioning itself as a juicy piece of unlovable gothic muck that’s guaranteed to turn off mainstream audiences, thus assuring it life beyond the normal distribution timetable. “Repo!” is horrifically calculated to appeal to outsider mentality, but it clicks together rather marvelously, riding an offbeat sense of the macabre to peculiar, yet quite interesting results.

In the not-too-distant future, an epidemic of organ failure has given rise to GeneCo, a corporation that sells needed body parts for a price. Run by Rotti (Paul Sorvino), who lords over his family of fools (including Paris Hilton, Bill Moseley, and Nivek Ogre), GeneCo feigns compassion until a payment is missed, signaling the arrival of the Repo Man to take back the organ by force. The man behind the mask is Nathan Wallace (Anthony Head), a troubled soul who watched his wife die and now spends his time making sure his ailing teenage daughter Shilo (Alexa Vega) doesn’t leave his sight or learn of his true profession. With Rotti scheming to find an heir to his massive fortune, it sets the stage for Nathan and Shilo to confront their past and fight for their future.

“Repo!” requires a specific desire from the viewer to heartily enjoy the fantastical nature the feature is pimping out. Based on the stage play by Darren Smith and Terrance Zdunich, the film is, in fact, a valid opera, with the cast belting out a nonstop parade of songs that develop the story and widen the filmmaking horizon. We’re talking over 50 tunes to fill out this 95 minute movie, blending the theatricality of a rock concert with the discipline of the abstract stage art form. Believe me when I write that “Repo!” takes some getting used to, as it plunges the viewer into an uneasy futuristic world where everyone belts out their thoughts, they prance around in the latest Hot Topic clearance fashions, and bloody innards flood the set design.

“Repo!” is a colostomy bag of highlights that requires a passable filmmaking touch to make it hum as a motion picture, which brings me to the director: Darren Lynn Bousman. After embarking on a cinematic career with three awful “Saw” sequels, it comes as a shock to the system to watch Bousman guide “Repo!” as well as he does. Granted, the material is a bit of a lateral move, with the helmer remaining in the blood and guts milieu he’s famous for. However, there’s newfound imagination from Bousman as he tries desperately to work around the 50 cents he was handed for a budget. “Repo” could use more oomph in the scope department, but the rest of the insanity looks competently crafted, with pleasing dedication to emotional content, as Nathan deals with his suffocating guilt and Shilo hopes to break free from her bedroom prison. Hey, at least Bousman has stopped infecting the multiplex with that reprehensible “Saw” malarkey, right? “Repo!” reveals creativity on a small scale, and it’s always a thrill to watch a filmmaker challenge himself beyond the norm.

Packaged as a comic book tale of sorts (exposition is poured from ink and pain frames), “Repo!” gets much mileage out of its candied misery, embellished beautifully by the cast, with special attention paid to Head and Vega, who truly understand what type of response is required from an itchy concept like this. Both actors commit to the outlandishness and deliver hearty performances, with Head channeling his inner Bowie to pleasing heights. Also of note is the angelic soprano Sarah Brightman, here playing ocular-advanced narrative thorn Blind Mag. As the only cast member who routinely works out her vocal cords, Brightman’s offerings hold expected elegance, bestowing the film with a needed boost of professionalism when the score dips into mechanical monotony at times. Hearing Brightman’s lilt and watching Head’s gut-wrenching affectation is where “Repo!” hits its most satisfying groove.

As much as “Repo!” impressed me, it’s far from a perfect creation. Bousman’s narrow depth of field reveals the production’s limitations with a cringing severity, underlining actors trying much too hard to indicate and special effects that aren’t very special. Also of irritation is Moseley, a fine genre actor who is miles out of his range when it comes to singing and dancing. His few moments onscreen are brutal to endure and break the spell “Repo!” is sweating hard to cast. After hearing Moseley’s wounded pipes and watching his rigor mortis footwork, I think the world owes a heartfelt apology to Pierce Brosnan.

The finale of “Repo!” lives up to its blown-out opera origins by serving up a volcanic display of tragedy and exaggerated sweep of fury. The film looks to close on a dramatically profound note, yet the entire picture feels caught up in a certain level of hysteria, leaving the last act push to gothic justice somewhat redundant. Still, “Repo! The Genetic Opera” lingers long after it ends, due in great part to a handful of memorable tunes and its persistent funky attitude, marked by an impressive desire to savor oddity and unconventional displays of heartache. 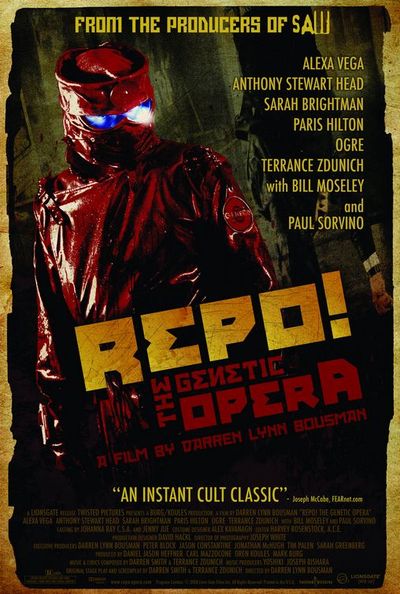