During his reign on the hit television show “King of Queens,” comedian Kevin James managed to combine the expected serving of fat jokes and pratfalls with a vigorous wit and nuanced domestic observation. “Paul Blart: Mall Cop” is his first solo starring endeavor, and there’s a flagrant absence of cleverness to gnaw on, replaced with a broader tone of family film hijinks. The end product won’t win any Oscars, but the edges of this slapstick action film retain James’s blitzkrieg sense of humor, making for a light comic adventure I’m positive kids will flip for.

A lonely security officer with weight and relationship issues, Paul Blart (Kevin James) desires to become a police officer, but finds his hypoglycemic self more suited to keeping his mall protected. One night, while distracted by a fierce game of Rock Band, Blart doesn’t notice the mall being taken over by a group of gymnastic criminals, leaving him the only employee left in the building when the thieves start to raid the stores. Armed only with his experience, Blart fights back the best he can, hoping to thwart the robbery, but also trying to save his daughter and his wig-kiosk object of affection (the poor man’s Anna Faris, Jayma Mays) before it’s too late.

“Mall Cop” is a straightforward exercise in silliness, using James’s gift for tumbly physical comedy as a beacon to guide the rest of the mild diversion to smile-worthy comic elevation. I wouldn’t classify the picture as “great,” but it’s not nearly as humiliating for James as it sounds. In fact, the actor makes the most out of this star turn, serving up his trademark flips and flops with incredible zeal, sweating up a storm to nudge the material past its inherent staleness and into the land of giggles.

Director Steve Carr, an old hand with flavorless family films (“Daddy Day Care,” “Are We Done Yet?”), backs James with curious moments of roughhouse stunt work. The mall terrorists are comprised of an extreme sport touring company (cartoon, but it works), with a pack of skateboarders and parkour enthusiasts after Blart, smashing around the building in what becomes an unexpected, and entirely welcome, token of intensity. Once “Mall Cop” goes from repetitive fat jokes and Blart lovesickness to “Die Hard Jr.” mode, Carr respects the change in gravity, turning in some PG-safe, glass-shattering acrobatics, and assembling a great KISS montage for Blart’s absentminded video gaming sidetrack. Carr doesn’t push the material to the edge for optimal satisfaction, but there are moments in which the picture surprises. In the dead zone of monotone family entertainment, every morsel of invention feels like a brick of gold.

There’s aren’t many movies willing to blow up a Rainforest Café for their grand finale, adding another layer of the unexpected to “Mall Cop” that counteracts the majority of dud jokes and miscalculated performances. All the picture truly needs is James, here deploying some amazing Segway moves and bruiser pratfalls, using the snug confines of the polyester security uniform to his advantage as he maneuvers around the film’s 400 fatty-falls-down-go-boom gags. There’s not an ounce of humanity to the picture, but James knows his audience well, and his sincerity is engaging. He just needs to lay off the weight jokes.

“Paul Blart: Mall Cop” needs to be digested as a lightweight matinee diversion aiming to please children, not as a creation of exceeding wit. Its manic spirit and occasional achievement of comedic violence makes for an entertaining sit. I only hope it pushes Kevin James to more rewarding cinematic endeavors. 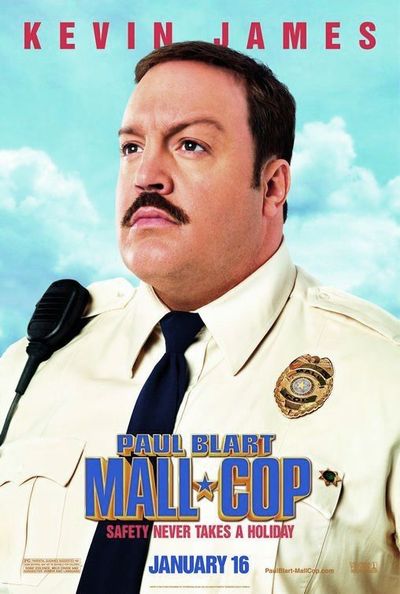 This movie is hilarious, I was laughing through the entire thing

This movie is hilarious, I was laughing through the entire thing