As a Minnesotan for nearly my entire life, the fish-out-of-water comedy “New in Town” drives me up a wall. While innocent fun was poked toward the state in the Coen Brothers’ 1996 classic “Fargo,” the business of cartooning up Minnesota has almost become a full-time industry, last felt in the pop culture dynamo, “Juno.” Because many in the remaining 49 states will take “Town” to heart, let me assure you all: Minnesotans would never present meatloaf to a first-time dinner guest (it’s casserole/hotdish or nothing at all), they don’t eat Tapioca by the bucketful, and I’ve never heard anyone introduce the glory of Jesus in casual conversation. It’s been 13 long years since “Fargo” and numerous irritating Lea Thompson interviews, and my sense of humor concerning this topic has been rubbed raw; “New in Town” is nothing short of a character assassination attempt on Minnesota, and even worse, it’s a ghastly romantic comedy that requires heavy sedation to endure.

An aspiring executive at a food manufacturing corporation based in Miami, Lucy Hill (Renee Zellweger) takes a chance to impress her bosses by volunteering to restructure a dairy plant in New Ulm, Minnesota. Once arrived, Lucy is shell-shocked by the frozen land, finding the cold unbearable, the locals exhaustively gracious, and the factory workers fearful of unemployment. Spending months surviving the small town blues, Lucy finds herself drawn to Ted (Harry Connick Jr.), the local union rep, and the community itself, trying urgently to avoid an upcoming round of layoffs that will destroy morale and sever her newfound friendships.

Indeed, the Minnesota jokes are the cornerstone of “New in Town,” pushing a thoughtless agenda to make the New Ulm populace come across as borderline mentally challenged folk, written as Nordic boobs who cling to their small-town bangs, Christmas sweaters, and monosyllabic responses to complex situations. It’s a cruel depiction that serves no real comedic purpose, nor is it a concept that’s seen to its ultimate satiric destination, especially when the polar opposite metropolis here is Miami, painted in the film as some sort of corporate Mecca for ruthless, ladder-climbing money whores. Miami? Perhaps this picture is payback for “Scarface.”

Cast aside the wandering-cow-in-the-road sight gags, accent crazy performances (J.K. Simmons, here as a curmudgeonly factory boss, is shameless with his “YEAH, YOU BETCHA!” characterization), and general cinematic disapproval of a culture that celebrates neighborly generosity, and “New in Town” just plain stinks as creation of romantic intent. It’s bad enough to trash Minnesota, but the rest of the script is a dreadful paint-by-numbers affair, turning over every conceivable cliché to form the body of the story. From the meet cute to the break-up-to-make-up, “New in Town” corals it all, working in montages and a slapstick Tapioca fight (no joke) to fill time while Zellweger and Connick Jr. summon zero chemistry together. The actors aren’t terrible here, they just lack needed electricity, though the screenplay doesn’t allow for much of a bond, only pulling Lucy and Ted together for a few brief scenes, leaving their relationship to bloom in a hurry instead of slowly embracing the audience.

On top of all of the nonsense, “New in Town” wasn’t even brave enough to shoot in Minnesota (good old Canada steps in for the North Star State), which renders the production useless all around. If you really, truly need a Minnesota romance to get you through the night, avoid “New in Town” like the plague and run out and rent Ali Selim’s masterful immigrant tale “Sweet Land.” You’ll thank me later. 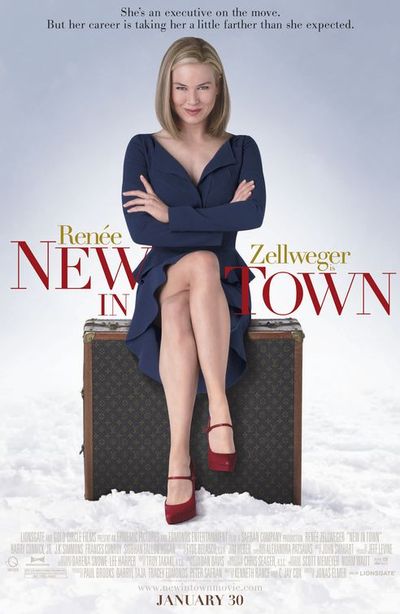