While a boisterous member of the facepalm school of needless horror remakes, I’m sure “My Bloody Valentine 3-D” won’t raise the blood pressure of the average horror nut. After all, the original 1981 film wasn’t, ya know…any good. Atmospheric, perhaps, but not a breathtaking, hallowed genre creation. This 2009 update isn’t interested in manufacturing a severe facelift, instead holding tight to the dog-eared slasher playbook, adding the gimmick of 3-D to provide audiences with a front row seat to terror, and, for the most part, atrocious acting.

When a mining cave-in accident results in the death of five men, the lone survivor, Harry Warden, is suspected of murder, soon awakening from a coma to embark on a Valentine’s Day killing spree using his trusty pickaxe. 10 years later, the town of Harmony, West Virginia is still coming to grips with the slaughter, only to find the wound reopened when Tom Hanniger (Jensen Ackles) returns to the community after a decade away. Looking to sell the mine and erase Warden’s legacy, Tom finds his attention drawn to old flame Sarah Palmer (Jaime King), now married to the town sheriff, Axel (Kerr Smith). When Warden’s trail of death reawakens for the upcoming holiday, it holds Harmony in a state of panic, while Tom, Sarah, and Axel try to figure out why the nightmare has returned.

“My Bloody Valentine” is a sloppy, campy motion picture, playing directly to genre enthusiasts who crave 100 minutes of blood-soaked escapism without the burden of traditional dramatic standards and proficient acting. The remake is actually questing to be cheesy, which leads to the ultimate question of faith: why? Instead of creating a scary motion picture that holds its posture as a disturbing, frightful creation, why make something that’s a goof from the first frame, only holding back on literal winks because, for some unknown reason, that would be considered tacky? The new “Valentine” is meant to be a festive time at the multiplex, but there’s a difference between a thoughtful invitation and an aggressive shove to a jokey aesthetic.

It hurts to be hard on director Patrick Lussier, who turned in some interesting visual work on the otherwise forgettable “White Noise” sequel last year. Here, Lussier is playing broadly for maximum approval, constructing a more aggressive “Valentine” than the 1981 version, which was practically “I, Claudius” in tone compared to the remake’s idea of scripting and staging. Revealing a distinct absence of cleverness, Lussier just shotguns the material, using an uncomfortable air of self-awareness to get the movie from scene to scene, spending more time dreaming up cartoon kills than freaking out the audience with some legitimate tension.

Using the 3-D as a crutch (I can’t imagine how anyone could sit through this in a 2-D presentation), Lussier does make a pretty picture. The mine sequences are particularly arresting, adding desired claustrophobia to the frame in inspired ways. The rest of the 3-D money shots are anticipated gore zones, with eyes popped out of heads, jaws ripped off and flung into the camera (with some noticeable help from horror’s new pal CGI), and explosions jumping off the screen. The extra dimension looks first-rate and certainly provides this movie with a personality it wouldn’t otherwise have, yet, like everything else in the film, the 3-D would’ve found a more interesting purpose if played straight. In many ways, “Valentine” is “Friday the 13th: Part 3” all over again, only absent the disco titles.

Of course, I would trade all the 3-D in the world for one reasonable performance. Clearly someone told the “Valentine” cast early on to play every scene as intentional comedy, with several of the actors busting out full-blown soap opera techniques to express turmoil and doubt. Granted, stacking the deck with the likes of Jamie King and Kerr Smith doesn’t invite dynamic thespian skill, but there should be someone around here taking matters seriously. The performances turn much of “Valentine” into a blood-drenched, elongated “Mad TV” skit, even sending a pro like Tom Atkins into the goofball, overacting abyss for no other reason than to beat the audience to the laugh.

I’m definitely aware that “Valentine” will be ultimately ingested for surface content alone, and I wouldn’t dare stand in the way of a horror fanatic looking for a simplistic highlight reel of violence. The original “Valentine” was lethargic and nearly as atrociously acted as the remake, but it contained a particular grit and tonal unease. The new “My Bloody Valentine” is a sleek joke the audience is already in on, depriving the film of any surprise. 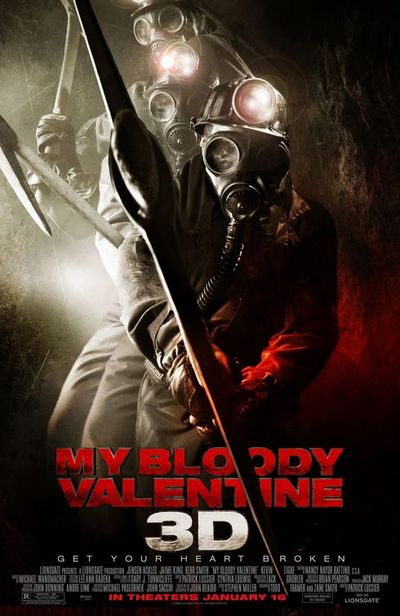 I saw this one last night, and although the film is not groundbreaking it does what it sets out to do and that is to entertain audiences. I had fun, but yes the acting was cheesy, bad and almost distracting.
-Mike