Playing in the official “Harry Potter” fingers-crossed family film franchise sweepstakes, “Inkheart” comes armed with fantastical visual heights, a strong literary theme, and the inexplicable box office appeal of Brendan Fraser. What “Inkheart” lacks is a cracking pace and a reasonable deconstruction of an intricate plot for the uninitiated, leaving a feature film of determined scope plagued by dismal execution.

Long ago, Mo (Brendan Fraser) discovered he was a Silvertongue, a rare human blessed with the skill to bring literary figures into the world by merely reading books aloud. When an unfortunate occurrence takes his wife (Sienna Guillory) away, Mo and his daughter Meggie (Eliza Bennett) travel around the world on the hunt for the out-of-print book “Inkheart” to restore order to their lives. On their trail is Dustfinger (Paul Bettany), a fire-juggler from “Inkheart” who was pulled from the story into the real world long ago and desperately wants back in, taking his worry to villain Capricorn (Andy Serkis, chewing scenery) to guarantee him safe passage. With Capricorn abusing the gifts of the Silvertongues to line his pockets and achieve world domination, it’s up to Mo, Meggie, and feisty Aunt Elinor (Helen Mirren) to find the book’s author (Jim Broadbent) and fight to save the day.

“Inkheart” faced an uphill battle on the way to a theatrical release (enduring numerous delays), and the battle scars are quite apparent on the final product. An adaptation of Cornelia Funke’s popular novel, “Inkheart” feels as though it has been pulled apart and put back together several times over, leading to a viewing experience that’s equal parts bewilderment and tedium. It’s a cluttered feature, with most of its minimal appeal resting on the shoulders of those who’ve already come into contact with the source material; educated crowds who won’t feel dizzy when discussions of Silvertongues and supporting character backstory are tossed around with little finesse. “Inkheart” isn’t impossible to follow, it just feels utterly impenetrable, thanks to direction from Iain Softley, which lacks any semblance of a proper blockbuster perspective.

When Softley’s great he’s fantastic (“The Wings of the Dove,” “Hackers”), but when he’s bad, it’s embarrassing to watch (“K-PAX”). “Inkheart” falls somewhere near the bottom end of the scale, though it’s not due to a lack of effort. Packing a wildly ambitious narrative, the picture spends an inordinate amount of time attempting to explain itself, working intensely to factor in a plethora of characters and fantasy origins, while juggling the appearance of literary icons (Toto, a thief from “One Thousand and One Nights,” and Unicorns) to keep in time with the novel’s adventuresome spirit. Softley has some intriguing storybook-laden production value at his fingertips, but he’s quickly lost at sea with this material, wrestling to connect scenes and fully develop subplots in just under 100 minutes. It’s a losing battle.

Some merriment is provided by Broadbent, who pops up in the film’s second act and appears to be the only actor who honestly grasps the bizarre tone of the picture. It’s a fun performance, miles ahead of Fraser’s dour emoting and the overtly serious Bettany, who somehow talked his spouse Jennifer Connelly into a five-second-long cameo as Dustfinger’s wife, which the film manages to recycle twice to squeeze some extra marquee juice out of this baby.

“Inkheart” distinctly loses steam midway through, and Softley never achieves a sliver of the magical happenings the opening act promises. Instead the film becomes a leaden pyrotechnics display of special effects in the final reel, while also sloppily covering a set-up for a sequel with an ending that’s pat and hardly propulsive; a mangled bout of reshooting that ends the film as it began: naggingly incomplete. 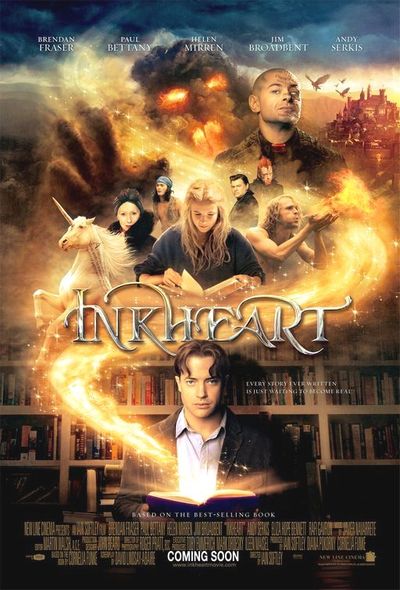