If someone would’ve told me a year ago that the top box office draws over the last few months would be dogs and Clint Eastwood, I would’ve laughed the laugh of kings (and then cried). Now, “Hotel for Dogs” doesn’t feature Dirty Harry in any type of supporting role, but it certainly has plenty of dogs, making it unquestionably irresistible to young audiences everywhere.

Struggling to remain together while bouncing around foster homes, siblings Andi (Emma Roberts) and Bruce (Jake T. Austin) are forced to commit petty crimes to make sure their clandestine pet dog Friday is properly taken care of. Finding an abandoned hotel, the kids discover a perfect space to hide Friday away from animal control officers, stumbling upon a ragtag group of strays in the process. With the help of a pet store clerk (Johnny Simmons), Andi and Bruce build an elaborate oasis for abandoned canines of all shapes and sizes, yet trouble soon arrives when the kids raise the curiosity of their deadbeat foster parents (Lisa Kudrow and Kevin Dillon), threatening the safety of the hotel and inviting the worry of a kindly social services agent (Don Cheadle).

“Hotel for Dogs” is strictly mild sauce for family audiences looking to ooh and ahh over highly trained canine actors, sent directly through a cinematic obstacle course of pranks and bodily functions. Though billed a comedy, there’s nothing explicitly funny about the picture, which resembles a mid-70s Disney throwaway production, intended only to babysit, not thrill.

For the less demanding, I could see “Hotel for Dogs” filling a small void in the now red-hot cute dog genre, as this picture is overflowing with all canines great and small. Director Thor Freudenthal deserves a medal for simply surviving the shoot, as he orchestrates the emotions of a plethora of professional pooches, who often swarm the frame. Thankfully, the seams rarely show, though the director doesn’t find enough visual oddity to backdrop the hotel residents once the kids get the place up and running.

Of course, finding fault with a film that encourages proper dog caretaking seems cruel, but the screenplay for “Hotel for Dogs” is such a flavorless, unfunny piece of writing that doesn’t aspire to be anything but obvious, which begins to fatigue the picture after the first five minutes. Sluggish stabs at tween romance, wicked dog catchers, and neglectful foster parents end up a bore, leaving the animals with the burden to keep the film passably engrossing, if you can get past the picture’s unnerving urine and poop fixation, the dogs carry the film appropriately, perhaps even outacting their human costars. Especially Cheadle, who should really have a long conversation with his agent about his future in worthwhile film roles. 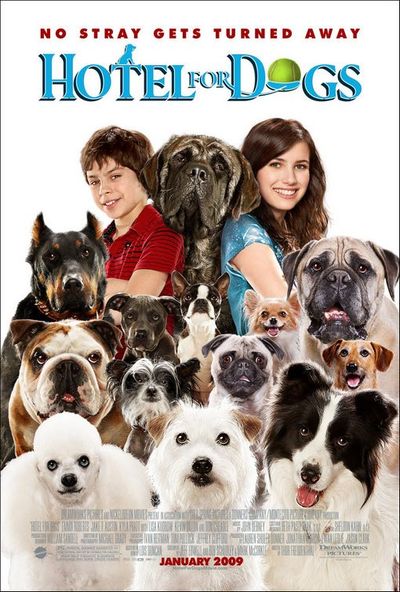 You're one hot dude.

Can’t ask for a better FAMILY movie! This movie was made for kids big and small yea sure some of the ideas in this movie are a little far fetched but what kids movie isn’t.