Yes, a movie titled “Donkey Punch” actually exists. What should’ve been a rowdy suspense piece that basks in the smirking idiocy of sexual myths and playground bedroom boasting is actually a toothless horror throwaway made on the cheap and elongated far beyond its expiration date.

On vacation in Spain, three British women are ready to party their cares and good judgment away. When they meet up with a group of lustful men, the celebration is moved to a nearby yacht and off into the open water. Once beyond the concern of the locals, drugs, drink, and reckless sex commences, the debauchery climaxing with the deployment of the fabled “Donkey Punch” sex move, thus killing one of the girls. Now faced with a death they don’t want reported to the authorities, the boys dream up a plan to dump the body and all videotaped traces of the murder. The ladies immediately refuse, leading to a violent standoff on the ship as the night wears on.

There’s a peculiar smugness to “Donkey Punch” that filmmaker Oliver Blackburn seems to be encouraging through his trite direction. Inspired by the recent horror bonanza gripping the worldwide film market, Blackburn reaches to the very bottom of the barrel for a suspense concept, dreaming up (with co-writer David Bloom) a cast of repugnant characters to follow as they journey into the misery they’ve willingly created. Shot on cruddy HD with limited financial resources, “Donkey” is shoddy exploitation cinema, using heaps of sex and splinters of grisly violence to give the viewer a crude thrill. If only it bothered to develop a brain.

“Donkey Punch” is pure sleaze, but it’s not welcoming sleaze. The screenplay is built around the complete ineptitude of twentysomething horndogs who fail to recognize poor decisions at every turn, making the moviegoing experience more about constant eye-rolling and contemptuous chortling than authentic nail-biting. Fumbling around in the dark striving to establish a pulse for this absurd film, Blackburn doesn’t give the audience much to root for, presenting characters who truthfully deserve their vicious fates. It would come as a relief to accept “Donkey Punch” as some sort of cautionary tale of reckless vacation behavior, but that would be giving the film intellectual credit it most certainly doesn’t deserve.

Drawing out suspense sequences and primitive dialogue exchanges to meet a 90 minute running time, Blackburn is hoping to thread a taut horror experience with very thin material. Shocks of gore and death are offered to beef up the frights, but after a punishingly protracted opening act setting up these clowns as willing participants in lurid behavior, some last-minute bloodshed seems a little too late in the proceedings to make much of an impact. “Donkey Punch” wants to assume a conventional good vs. evil stance for its final showdown, but I was honestly hoping everyone would perish early, saving me the agony of watching limited actors indicate and observing a director who should’ve come up with something more substantial to support his tacky title. 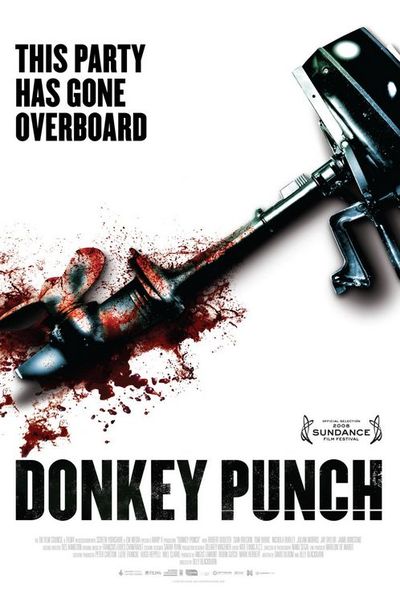 What about the scene where the two girls get away in the dinghy and then shoot the flair? That scene was brilliant (and pointless)! Lol...
-Mike

I saw the trailer in Philly just before The Wrestler and the entire audience cracked up at the title.

After, I checked it out on IMDB and someone made a short about relationships a few years ago---with the exact same name!

What does it mean!